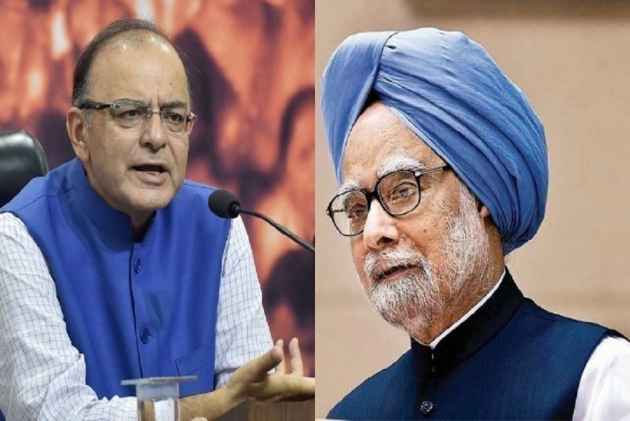 Taking on former prime minister Manmohan Singh for calling demonetisation an "organised loot", Finance Minister Arun Jaitley said today it was an "ethical drive and moral step" while the "loot" happened under him in 2G, CWG and coal block allocation scams.

The demonetisation decision has led to a larger formal economy, cleaner economy and bigger tax base, Jaitley said, asserting that the government strongly stands by its decision a year after it made the "historic" announcement, marking an "watershed moment" for the economy.

At a BJP press conference, Jaitley said the party has a different perspective than the Congress on the issue of ethics, as its priority is to serve the nation while for the opposition party it is about serving the family.

On a day Singh launched a withering attack on the government over demonetisation, saying it had harmed India's image, Jaitley asked him to compare pre-2014 and post-2014 reputation of Indian economy.

"You were being considered an economy impacted by policy paralysis... You were off the global radar. Today, there isn't an international agency which does not eulogise the kind and quality of structural reforms India has taken," Jaitley said.

There was an ethical and moral rationale behind the note ban decision, he said, hitting out at Singh over his loot comments.

Listing out measures taken by the government to curb black money and corruption, he said Prime Minister Narendra Modi had undertaken a transformation of economy with "structural reforms".

After coming to power, the BJP believed that it was most urgent to "shake up" the status quo. Excessive cash transaction was leading to tax evasion and honest tax payers suffered "double whammy" as they ended up paying taxes for evaders too, the finance minister said.

Demonetisation is not a solution to all problems but it has changed the agenda, ushering in less-cash economy, increasing numbers of tax assessees and squeezing terror funding.

Data mining has led to identification of 1.8 million bank account holders with disproportionate income, he said.

"The Congress has a history of not taking one big step against black money. We are more than satisfied with the direction we have gone (in)," he said.

He parried a question about Raghuram Rajan's reported stand against demonetisation when he was the RBI governor, saying he would choose not to answer it as he does not find it necessary to disclose all the facts he as a finance minister is privy to.

The Congress has sought to corner the government over demonetisation and decided to observe 'black day' tomorrow on the first anniversary of the decision which invalidated 86 per cent of the currency in the system.

The BJP has announced it will celebrate 'anti-black money day' tomorrow, with its leaders fanning out across the country to highlight the "successes" of demonetisation.

Calling note ban a "reckless" exercise, Singh said during an interactive session with businessmen in Ahmedabad that "demonetisation was an organised loot and legalised plunder".