Guptill smashed seven sixes and six fours as New Zealand posted 172 for five in the Group 2 Super 12 match. Scotland replied with 156 for five. 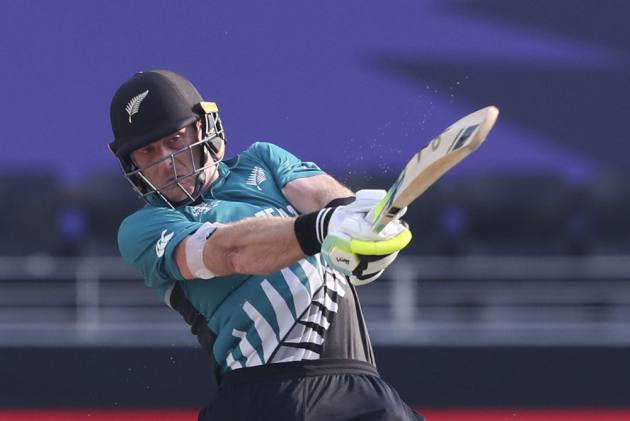 Opener Martin Guptill's blistering 56-ball 93, which was built around monstrous sixes and authoritative batting, set up a 16-run win for New Zealand over a spirited Scotland in the T20 World Cup in Dubai, UAE on Wednesday.

In all, Guptill smashed seven sixes and six fours as New Zealand posted 172 for five in the Group 2 Super 12 match. Scotland replied with 156 for five in their allotted 20 overs at the Dubai International Cricket Stadium.

Michael Leask blazed away to an unbeaten 42 off 20 balls, but his effort was not enough for the Scots.

Most of his big hits were directed towards the mid-wicket region and by the time he was done with his knock, Guptill was overcome with exhaustion in the extreme heat.

One of New Zealand's prolific run-scorers over many years, Guptill added 105 runs for the fourth wicket with Glenn Phillips (33) to put his team in a commanding position.

Asked to bat first, New Zealand were off to a brisk start with Guptill leading the way in the company of Daryl Mitchell (13).

As many as 13 runs came in the match's very first over bowled by Bradley Wheal (2/40), but Safyaan Sharif (2/28) made an excellent start in the next over, giving away just one run.

Playing this game in place of an injured Josh Davey, Alasdair Evans was smashed for two successive boundaries by Guptill through the point region, the batter cutting with utter disdain on both occasions.

Mitchell too got himself a boundary against Wheal but the opener was trapped in front of the wicket by Sharif in the fifth over. The on-field umpire's decision was challenged, albeit unsuccessfully, by the batter.

In the middle of the fine first spell, seamer Sharif got the big wicket of New Zealand captain Kane Williamson (0) four balls later, as a diving Matthew Cross completed a good catch behind the stumps after the batter failed to connect properly while playing it down the leg side.

Unperturbed by the double blows, Guptill smashed Evans for a maximum over backward square leg fence, as the Kiwis collected a productive 52 runs during power play, with 16 of them coming in the sixth over.

With that big hit, Guptill became only the second batter after Indian captain Virat Kohli to cross 3000 runs in T20 Internationals.

Scotland enjoyed another success right after spin was introduced for the first time, when slow left-armer Mark Watt castled Devon Conway (1) with his very first ball in the seventh over.

Only 18 runs came between the 6th and 10th over as Scotland tightened things.

However, the Scots had no answer to the onslaught launched on them by Guptill, who hammered their best bowler Sharif for two sixes.

There was also a six that travelled 102m, the second biggest in the Super 12 stage.

However, the NZ innings lost a bit of momentum after his dismissal as they could not manage only 22 runs in the last three overs.

Skipper Kyle Coetzer (17) started the proceedings for Scotland in earnest, hitting New Zealand's lead pacer Trent Boult for fours on either side of the wicket.

Coetzer drove Tim Southee through cover-point for a boundary and then played a magnificent square drive off the back foot against Boult, who had his man two balls later when he deceived the batter with a slow off-cutter.

Two deliveries later, George Munsey (22) played one of the day's best shots when he played Boult through the line on the on side.

After two quiet overs, Matthew Cross (27) hit Adam Milne for five fours on the trot as Scotland made 48 runs in the power play.

Munsey smashed Ish Sodhi for two sixes but in trying to hit one too many, he got out soon thanks to a fine running catch by a sliding Southee, who came back to knock Cross' stumps to leave Scotland at 76 for three as the 12th over approached.

From there, the Scotland innings could not gather the momentum required to mount a challenge to their fancied opponents, despite Michael Leask's lusty hits.