Of Bombs And Comics

My first reaction to Binyamin Netanyahu’s exhibition of comics at the UN General Assembly was shame. 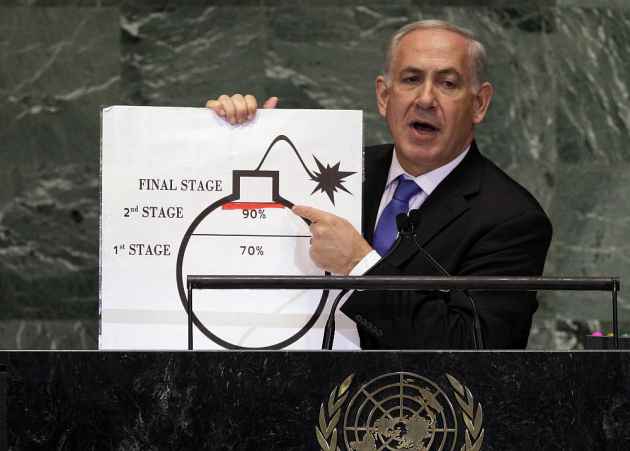 MY FIRST reaction to Binyamin Netanyahu’s exhibition of comics at the UN General Assembly was shame.

Shame that the supreme elected representative of my country would stoop to such a primitive rhetorical device, bordering on the childish.

(One Israeli commentator suggested putting him on a rug with a lot of paper and Indian ink, and letting him play to his heart’s content.)

He was speaking to a half-empty chamber (Israeli TV was careful not to show the entire hall during the speech), and the audience consisted of second-grade diplomats, but these were still educated people. Even Netanyahu must have realized that they would despise this display.

THIS AUDIENCE was proud of him. He succeeded in touching their deepest emotions.

To understand this, one must recall the historical memories. Jews were a small, powerless community everywhere. They were completely dependent on the Gentile ruler.

Whenever their situation was in danger, the Jews chose the most prominent person among them to plead their cause before the emperor, king or prince. When this “pleader” (Shtadlan in Hebrew) was successful and the danger was averted, he won the gratitude of the whole community. In some cases, he would be remembered for generations, like the mythical Mordecai in the Book of Esther.

Netanyahu fulfilled this function. He went to the very centre of Gentile power, today’s equivalent of the Persian Emperor, and pleaded the case of the Jews threatened with annihilation by the current heir of Haman the Evil (same Book of Esther).

And what an idea of genius to exhibit the drawing of the Bomb! It was reproduced on the front pages of hundreds of newspapers and on TV news programs around the world, including the New York Times!

His popularity soared to new heights. Moses himself, the supreme pleader at the court of Pharaoh, could not have done better.

BUT THE crux of the matter was hidden somewhere between the torrents of words.

The “inevitable” attack on Iran’s nuclear installations to prevent the Second Holocaust was postponed to next spring or summer. After blustering for months that the deadly attack was imminent, any minute now, no minute to spare, it disappeared into the mist of the future.

Well, one reason was the polls indicating that Barack Obama would be reelected. Netanyahu had doggedly staked all his cards on Mitt Romney, his ideological clone. But Netanyahu is also a True Believer in polls. It seems that Netanyahu's advisors convinced him to hedge his bet. The evil Obama might win, in spite of the Sheldon Adelson millions. Especially now, after George Soros has staked his millions on the incumbent.

Netanyahu had the brilliant idea of attacking Iran just before the US elections, hoping that the hands of all American politicians would be tied. Who would dare to restrain Israel at such a time? Who would refuse help to Israel when the Iranians counter-attacked?

But like so many of Netanyahu’s brilliant ideas, this one, too, flopped. Obama has told Netanyahu in no uncertain terms: No attack on Iran before the elections. Or else…

THE NEXT President of the United States of America – whoever that may be – will tell Netanyahu the same after the elections.

As I have said before (excuse me for quoting myself again), a military attack on Iran is out of the question. The price is intolerably high. The geographic, economic and military facts all conspire to prevent it. The Strait of Hormuz would be shut, the world economy would collapse, a long and devastating war would ensue.

Even if Mitt Romney were in power, surrounded by a crowd of neocons, it would not change these facts one bit.

Obama’s case is very much strengthened by the economic news coming out of Iran. The international sanctions have had amazing results. The sceptics – led by Netanyahu – are in disarray.

Contrary to the anti-islamic caricature, Iran is a normal country, with a normal middle-class and citizens with a high political awareness. They know that Mahmoud Ahmadinejad is a fool and if he had really wanted to produce a nuclear bomb, would he have made all these idiotic speeches about Israel and/or the Holocaust? Shouldn’t he have kept his mouth shut and worked hard at it? But since he is about to go away anyhow, no need to make a revolution just now.

The practical upshot: Sorry, no war.

THE WHOLE affair brings up again the Walt-Mearsheimer controversy. Does Israel control US policy? Does the tail wag the dog?

To a very large extent, that is undoubtedly the case. Enough to follow the present election campaign and perceive how both candidates treat the Israeli government obsequiously, competing to outdo the other with words of flattery and support.

Jewish votes play an important role in swing states, and Jewish money plays a huge role in financing both candidates. (O tempora, o mores! Once there was a Jewish joke: A Polish nobleman threatens his neighbouring nobleman: “If you hit my Jew, I shall hit your Jew!” Now one Jewish billionaire threatens another Jewish billionaire: If you give a million to your Goy, I shall give a million to my Goy!”)

The Obama administration’s Middle East policy staff is manned by Zionist Jews, down to the US ambassador in Tel Aviv, who speaks better Hebrew than Avigdor Lieberman. Dennis Ross, the grave digger of Middle East peace, seems to be everywhere. Romney’s neocons, too, are mostly Jews.

Jews have a huge influence – up to a point. This point is extremely significant.

There was a minor illustration: Jonathan Pollard, the American-Jewish spy, was sent to prison for life. Many people (including myself) consider this penalty unduly harsh. Yet no American Jew dared to protest, AIPAC kept quiet and no American president was swayed by Israeli calls for clemency. The US security establishment said No, and No it was.

The war on Iran is a million times more important. It concerns vital American interests. The American military opposes it (as does the Israeli military). Everybody in Washington DC knows that this is no side issue. It touches the very basis of American power in the world.

And lo and behold, the US says NO to Israel. The President says coolly that in matters of vital security interests, no foreign country can order the US Commander in Chief to draw red lines and commit himself to a war. Especially not with the help of a comic-book drawing.

Israelis are astounded. What? We, the country of God’s chosen people, are foreigners? Just like other foreigners?

This is a very important lesson. When things really come to a head, the dog is still the dog and the tail is still the tail.

SO WHAT about Netanyahu’s Iran commitment?

Recent I was asked by a foreign journalist if Netanyahu could survive the elimination of the “military option” against Iran, after talking for months about nothing else. What about the Iranian Hitler? What about the coming Holocaust?

I told him not to worry. Netanyahu can easily get out of it by claiming that the whole thing was really a ruse to get the world to impose tougher sanctions on Iran.

People of influence in Israel are divided.

The first camp worries that our Prime Minister is really off his rocker. That he is obsessed with Iran, perhaps clinically unbalanced, that Iran has become an idée fixe.

The other camp believes that the whole thing was, right from the beginning, a hoax to divert attention from the one issue that really matters: Peace with Palestine.

In this he has been hugely successful. For months now, Palestine has been missing from the agenda of Israel and the entire world. Palestine? Peace? What Palestine, What peace? And while the world stares at Iran like a hypnotized rabbit at a snake, settlements are enlarged and the occupation deepened, and we are sailing proudly towards disaster.

And that is not at all a comic book story.