According to a health department official, a 45- year-old woman, who was tested positive for Omicron, had arrived from Canada. Her sample was sent to NCDC, New Delhi, for genome sequencing. 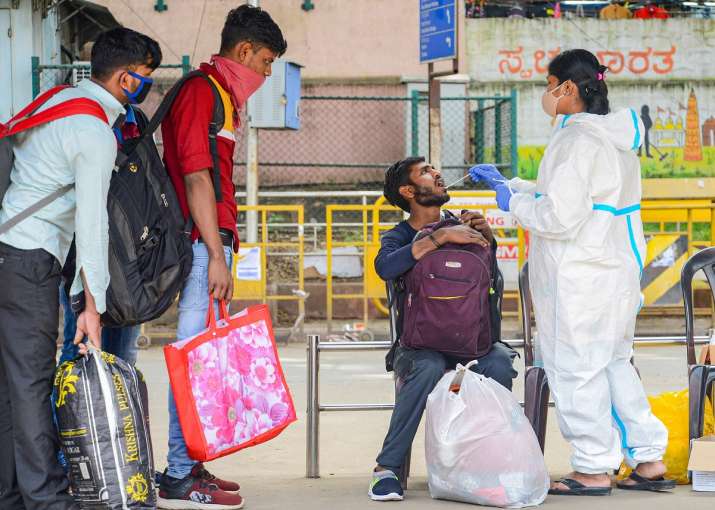 Himachal Pradesh, a state which claims to have completed 100 percent vaccination of both doses of Vaccination, recorded maiden case of Omicron variant on Sunday, said National Centre for Disease Control (NCDC) New Delhi.

The case has been identified in Mandi district in Himachal Pradesh.

The 45- year-old woman, who was tested positive for Omicron, had arrived from Canada .

A health department official said "A 45-year-old woman had arrived in Shimla on December 3. Her RTPCR test was done on 8th day of her arrival ie on December 11 and it was found positive ".

Her sample was sent to NCDC, New Delhi, for genome sequencing. The report was received from the genome sequencing laboratory on December 26 2021. She had received both the doses of Covid-19 vaccine as per her records .

Upon tracing contact  of the positive case of Omicron, three primary contacts have been identified so far and they have already been tested negative. All of them have received both doses of Covid vaccine.

Out of them, 1,747 were eligible for RT-PCR testing and 20 others were not eligible for the testing as some had completed 14 days of home isolation while few of them were either staying out of Himachal Pradesh or remained untraceable.

Out of these 1,747 international passengers, RT-PCR tests have been done for 942 returnees on the 8th day after their arrival or when the symptoms appeared.

Ten samples have been found positive of which seven samples were sent for whole genome sequencing to NCDC, New Delhi for the final confirmation on Omicron.

The report of Mandi woman have been confirmed while rest three samples were in the process of being sent to NCDC, Delhi for further confirmations.

"We are keeping a close surveillance on all the persons returning from the foreign countries or international travelers coming to the state .The guidelines are being strictly enforced " said Amitabh Awasthi, state's health secretary .

Needless to mention that Prime Minister Narendra Modi is arriving Mandi on December 27 –a date coinciding with completion of four years of Chief Minister Jai Ram Thakur .He will launch new projects worth Rs 11,281 cr as the state enters the election year.