Will the Omicron variant drive the Covid-19 third wave in India? The Union Health Ministry says the chances are very low. 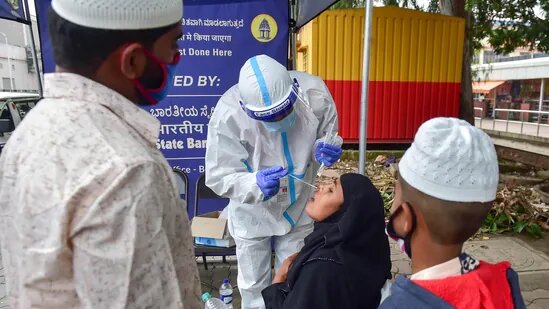 A Frequently Asked Questions (FAQs) on SARS-CoV-2 variant Omicron, released by the Ministry of Health and Family Welfare, on November 3 says that “given the fast pace of vaccination in India and high exposure to delta variant as evidenced by high seropositivity, the severity of the disease is anticipated to be low. However, scientific evidence is still evolving.”

The Ministry has released the FAQs to educate the general public about the emergence and spread of Omicron as of now. Answering a question on whether this variant will drive the third wave in India, it predicts that the chance seems to be low for the above-mentioned reasons.

Outlook has earlier reported that though the health experts and scientists in India have advised caution yet they feel that the current immune profile of the majority of the population in India makes them less vulnerable to Omicron as compared to any other country in the world.

The general public has been advised to wear masks properly, take both doses of vaccines (if not yet vaccinated), maintain social distancing and maintain good ventilation to the maximum possible.

“Omicron cases are increasingly being reported from countries outside of South Africa and given its characteristics, it is likely to spread to more countries including India. However, the scale and magnitude of rise in cases and most importantly the severity of disease that will be caused is still not clear,” the Ministry’s FAQs added.

While some reports say that Omicron was first spotted on November 9 in Botswana yet the WHO release states that it was identified in a sample in South Africa on November 24. Since then, the variant has spread to more than 30 countries including India.

After two cases of Omicron have been confirmed in India, the government has taken up various additional measures to track and trace its spread. It is monitoring the situation closely.

“Meanwhile, the scientific and medical community is geared up for developing and deploying diagnostics, carrying out genomic surveillance, generating evidence about viral and epidemiologic characteristics, and development of therapeutics,” the FAQ said.

“However, vaccine protection is also by antibodies as well as by cellular immunity, which is expected to be relatively better preserved. Hence vaccines are expected to still offer protection against severe disease and, vaccination with the available vaccines is crucial. If eligible, but not vaccinated, one should get vaccinated,” it said.