Tears were spotted in Siraj's eyes, signalling the fact that the India cap means a lot to the youngster. 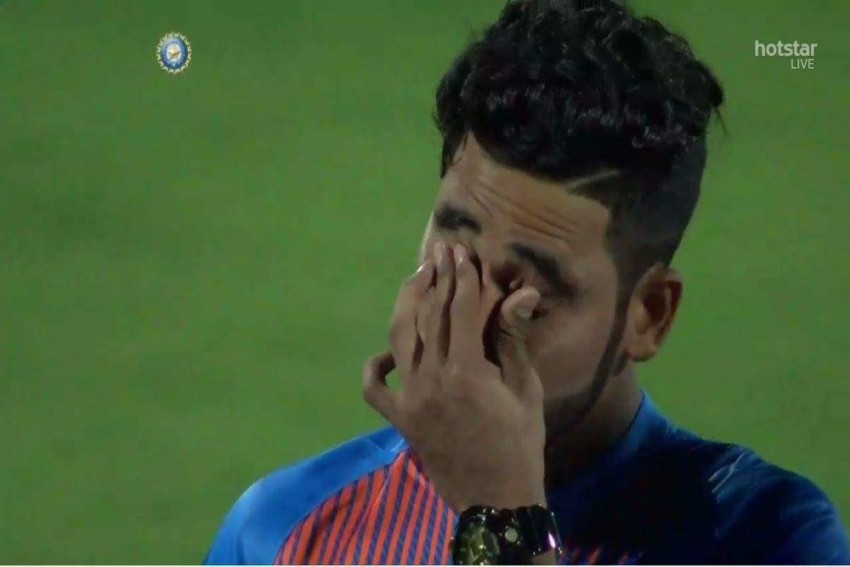 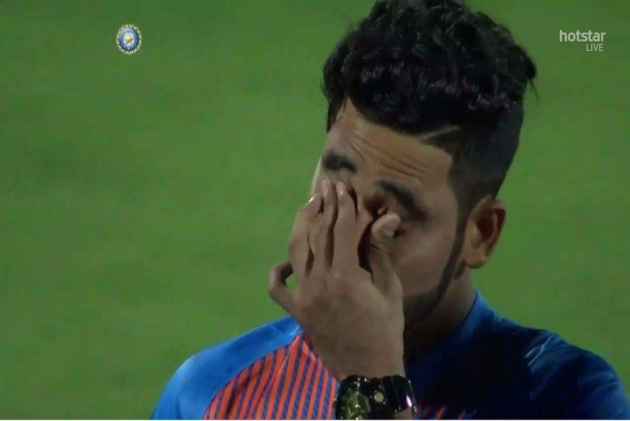 outlookindia.com
2017-11-05T19:22:07+05:30
It wasn’t the debut match Hyderabad pacer Mohammed Siraj was dreaming of. Playing his first T20 international against New Zealand at Rajkot on Saturday evening, Siraj conceded 53 runs for the lone wicket of rival skipper Kane Williamson.
He was struck repeatedly for sixes by opener Colin Munro.
But Siraj’s emotional moment just after the national anthem before the match is going viral online. His pictures with wet eyes have won his fans' hearts.
Tears were spotted in Siraj's eyes, signalling the fact that the India cap means a lot to the youngster.
Siraj had come to scene after his brilliant performance in the Indian Premier League (IPL) 2017. Sunrisers Hyderabad had picked him for Rs. 2.6 crore, raising many eyebrows.
The 23-year-old PL played six matches and claimed 10 wickets.
Son of an auto rickshaw driver, Siraj also showed some decent performances for India A against South Africa A and New Zealand A recently.
"I feel proud that at 23, I am good enough to shoulder the responsibility of my family. The day I got an IPL contract, I told my father that I won't let him work anymore.
Usi din se maine father ko bola ki aap abhi rest kaaro (that very day I told Dad that now you can rest). And yes, I have shifted with my family to a new house," Siraj had told PTI recently.
The 23-year-old right-arm pacer has been on the fringes with some decent performances for India A but he didn't expect a call-up this early.
"I knew that some time in future I will get a call-up but did not expect it this soon. I can't tell you how happy I am.
When I told my parents, they were speechless. It's a dream come true," said ecstatic Siraj, who is gearing up for tomorrow's Ranji Trophy game against Karnataka.
While IPL got him recognition, Siraj feels that it's his hardwork in the Ranji Trophy during the 2016-17 season for Hyderabad that has resulted in all the success that he has got.
"Whatever I am today is primarily because of Ranji Trophy performance. My 40-odd wickets last season gave me the confidence. There's nothing like getting wickets in first- class cricket. I was picked for Rest of India after that and because of Ranji Trophy, I got the IPL deal. So 60 per cent credit for this call-up is performance in first-class cricket," he said.
(With PTI inputs)
For in-depth, objective and more importantly balanced journalism, Click here to subscribe to Outlook Magazine