Adequate security arrangements were to be put in place on the eve of new year to implement the guidelines issued by DDMA keeping in view spread of covid-19 in the national capital, police said. 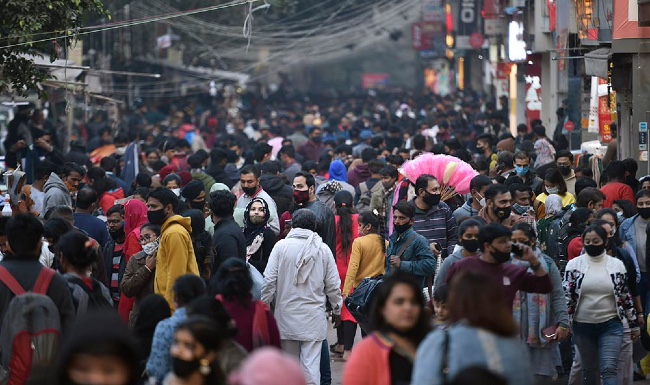 Shoppers and new year revellers gathered at popular hotspot like Connaught Place and Sarojini Nagar on Friday even as there was intensive patrolling and enforcement to ensure adherence to Covid-appropriate behaviour, amid a rise in infections in the national capital.

Ashok Randhawa, president of Sarojini Nagar Mini Market Traders' Association, however, rued that there was a thin crowd and shopkeepers incurred huge losses. "The shops are opening on an odd-even basis. We had stocked up woollen clothes for selling but now with thin crowds we are not anticipating a huge business. How will we store these clothes and whether they will remain in vogue next year is also the question," he said.

He stressed that they are ensuring adherence to COVID-19 norms in the market and even distributing masks to visitors and shops are not allowing entry to those without masks. According to market association of Connaught Place, a Delhi police team was patrolling and making announcements asking people to leave timely in order to reach home by 10 pm as per the guidelines.

"The crowd is usual. It is exactly what it is everyday. Even if the government has asked the shops to open on odd even, the crowd is still the same. It’s a pity that election rallies can go and the traders have to suffer," said Atul Bhargav, president, New Delhi traders association.

Enforcement staff from NDMC were also on the ground to ensure that the Delhi Disaster Management Authority's guidelines are followed, he said, adding that despite the government's announcements the crowd is not exactly thinner. There were long queues at metro station gates.

Strict action was taken against those found violating the DDMA guidelines and not following Covid-appropriate behaviour, the police said. From ensuring that night curfew is strictly enforced to intensifying patrolling in areas such as Connaught Place, Chanakyapuri, Hauz Khas among other specific areas of party hubs and prosecuting those found indulging in drunken driving or eve-teasing, the Delhi Police had put its force on toes also with respect to anti-terror measures.

Special teams in plain clothes including special teams of women personnel had been deployed across the national capital to ensure safety and security of women, police said. Delhi Police Spokesperson, Chinmoy Biswal said, "Adequate number of police arrangements had been made. Strict enforcement of DDMA guidelines were being ensured and citizens were requested to abide by the guidelines and follow Covid-appropriate behaviour."

Police personnel were patrolling at different areas in the national capital to ensure that the Covid appropriate behaviours was being followed and smooth flow of traffic was being ensured.