An indomitable energy enamors the air at the festival, mirroring the stature and strength of its surroundings. It’s not just about making merry, the Naropa Festival is also a pretext to consolidate the foundations of a community based on a soil that’s dangerously susceptible to calamities 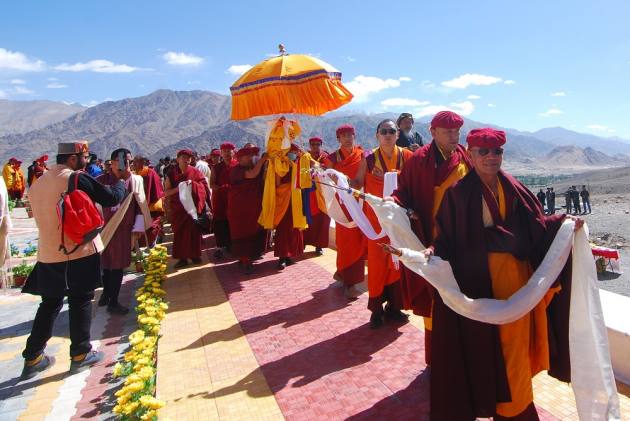 As the aircraft hits the runway of the Kushok Bakula Rinpoche Airport in Leh in the middle of September, one senses the strong nip in the air suggesting the arrival of an early winter. If one reaches out by stretching their hand, the snow-capped mountains don’t seem like a distant reality at all. Walking through a landscape that feels too good to be turned into an airport, the excited traveller is welcomed to the magnificence of Ladakh, nestled at an unnerving elevation of 11,480 feet above sea-level. An acute dip in oxygen levels might be a cause for physical distress to mere plain dwellers, but in order to experience life inside a picture-postcard, the initial discomfort is only a small price to pay. 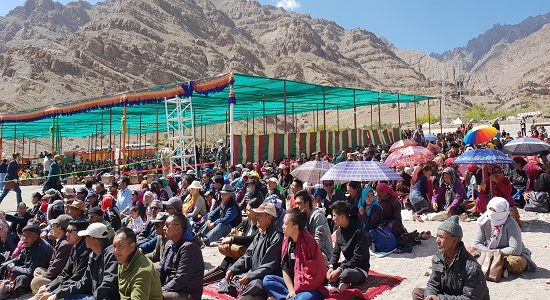 An enthralled audience at the Naropa Festival

As the vehicle wheels out of the airport to venture into familiar town territory, one often feels a little overwhelmed by the explosion of a clear blue sky seeping in through the car windows on either side. It’s an alien sight — skies are supposed to be gray at worst and yellow at best. The crystal blue must be painted, only that it’s not, and it weighs down on your heart until you’re sufficiently prepared to breathe in its unadulterated purity. As the journey progresses and one tries unsuccessfully to devour every bit of the visual and sensual spectacle they have suddenly been thrust into, announcements of the Naropa Festival catches one’s attention from the corner of the eye. It’s one of the largest Buddhist festivals in Asia, often called the ‘Kumbh Mela of the Himalayas’. Hosted in the village of Hemis 45 kilometres from Leh town, the Naropa Festival is a five-day long carnival of the Drukpa lineage that is spread across the Himalayan belt of the subcontinent. With the scenery gradually unfolding in the backdrop of the mighty mountains, the chilly winds from the snow-clad peaks carry the music of a festivity that promises to be an experience one would be foolish to miss.

While on the way to the Naropa Festival, the reels playing out on either side of one’s vehicle justifiably increases the expectations of what the destination might have in store. And perhaps, very little in this part of the country disappoints. Rows of tents erected on either side of the concrete road welcome the visitor. Piping hot local food, colourful trinkets shimmering like stardust under the blinding sun, and playful young children racing to the monastery — the cold, arid landscape gradually comes alive while being watched over like a guardian by the Himalayas.

Commencing on September 16, the Naropa Festival is hosted under the guidance of His Holiness, the 12th Gyalwang Drukpa of the Drukpa lineage in Tibetan Buddhism. The unfurling of the 85-feet long thangka — a Buddhist painting of a deity on cloth — inaugurates the spiritual and cultural extravaganza, as people from across the world prepare to witness a riot of colours and energy stir up the usually tranquil air. The unfurling of the 85-feet-long Thangka

“It’s something we look forward to every time,” says a Sri Lankan couple who are regulars at the festival. And it’s not too difficult to see why. Apart from igniting a spiritual fervour in the ones seeking it, the celebrations capture the essential spirit of a community working hard to embrace the challenges presented to them by their home turf. But the good news is, one perhaps, will not have to wait for 12-long-years again in order to be a part of this sublime experience, as the Naropa Festival is slated to become an annual fixture from this year onward. It was previously held in 2016, only to be organised again this year as a considerable percentage of devotees failed to attend it last time.

With technology providing easy access to opportunities to the remotest parts of the world, affordable and quality education continues to top the list of the most urgent requirements for a developing society. And higher the altitude, higher the time taken to make progress. Upholding the legacy of the Indian scholar-saint Naropa, his followers have contrived to establish a year-long postgraduate fellowship in his name with the aim to address this gap in education facing the youngsters of the region. “We already have the Rancho School (of 3 Idiots fame), which was started to help the underprivileged children of the region. Now, along with that, we have the Naropa Fellowship. Nowadays, not just in Ladakh, but all across India, the problem of unemployment has been on the rise. We don’t want our future children of the Himalayas to face such problems,” says Drukpa Thuksey Rinpoche, the chief spokesperson for the 12th Gyalwang Drukpa, Jigme Pema Wangchen. The residential programme invites prospective applicants from every field and profession, however, preference will be given to candidates from the Himalayan belts of Jammu and Kashmir, Uttarakhand, Sikkim and Himachal Pradesh in India, and Nepal and Bhutan internationally. “You might be thinking since the Drukpa is organising it that it will only be for Buddhist people, but we have people from all religions applying for the fellowship. The education imparted here won’t only help students to write or speak better, but it’ll also focus on training them to create peace and preserve the Himalayan culture,” His Eminence Rinpoche says. With the vision to train entrepreneurs and leaders in policy making for the development of the Himalayas, the Naropa Fellowship has already received over 1,700 applications in its maiden year, according to the organisation’s officials. The ambitious project is all set to take off on a sprawling campus in Hemis, heralded by competent faculty from Harvard University, Oxford University, ISB Hyderabad, among others.

An indomitable energy enamors the air at the festival, mirroring the stature and strength of its surroundings. It’s not just about making merry, the Naropa Festival is also a pretext to consolidate the foundations of a community based on a soil that’s dangerously susceptible to calamities. A stunning display of resilience and defence against negative forces by the Kung-Fu nuns and local archers are among the many testimonies to the vibrant and ancient history of the region. 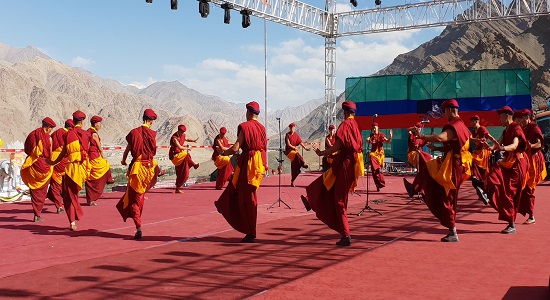 Performance by the Kung-fu nuns

“As you all know, environment is the most challenging thing in a place like Ladakh. We are now focusing on water, which is turning into precious gold. It’s more precious than petrol and diesel. In a place like Ladakh, which is a desert, we only get water from the melting snow, but global warming has affected that as well,” His Eminence says. As the country still grapples to cope with the mammoth losses faced in Kerala last month due to the floods, the festival of Naropa uses its platform to assist the state in rebuilding itself. “An album by young Ladakhi EDM artistes is being distributed at the festival, and all proceeds from it will go into helping Kerala,” says Lynne Dipam, a volunteer-donor from Malaysia working with the fellowship.

As the sparkling azure gives way to a star-studded night sky, the festival’s stage lights up to welcome a few more stars every evening. From Kailash Kher, to Papon, to Sonu Nigam and Akriti Kakar, the voices of the Bollywood artistes resonate and echo through the crests and troughs surrounding Hemis. On reaching the final evening, one would find it difficult to imagine what could possibly be a befitting conclusion to such a magnificent carnival of positivity. Really, what could it be? Perhaps, a Guinness World Record? — Nearly 300 women, aged 18 to 60, wearing their heavy coat-like traditional ‘gonchas’ and the ‘perak’ headgear, congregate to dance and break a world record against the most enviable backdrop ever.

But soon after, it’s time to bid adieu. As the carpets are rolled up and the lights are shut out one by one, weary and happy faces trundle down the slope to hold memories of what would remain as a few days of pure bliss and enlightenment. ‘The land of high passes’ is here to stay in every heart, forever.