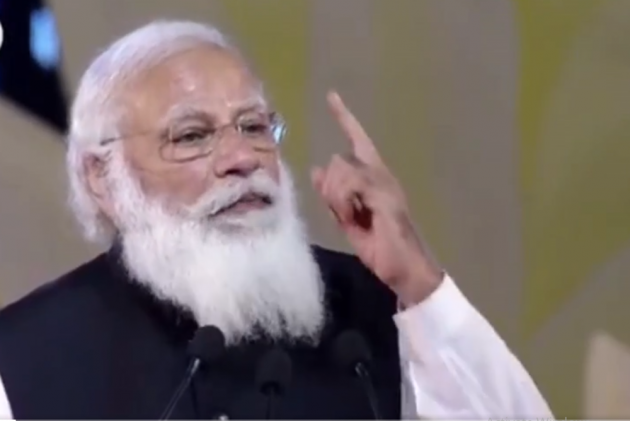 Recalling the 1971 war of independence, Modi said the pictures of atrocities that the Pakistan Army inflicted on the people in then East Pakistan (now Bangladesh) used to distract people in India. "I must have been 20-22 years old when I and my colleagues did Satyagraha for Bangladesh's freedom," he said.

Prime Minister Modi said that Bangabandhu had a mesmerising personality and was blessed with an unwavering commitment to further human empowerment. No wonder all sections of society were inspired by him.

Modi recalled the role played by the Indian Army in Bangladesh's freedom war and said the blood of those who fought for their liberation and the blood of Indian soldiers are flowing together and this blood will form such a relationship that will not break down under any type of pressure.

"I salute the brave soldiers of the Indian Army who stood with the brothers and sisters of Bangladesh in Muktijuddo. Those who gave their blood in Muktijuddo, sacrificed themselves, and played a very big role in realising the dream of independent Bangladesh," said Modi, who is visiting Bangladesh on his first trip to a foreign country since the COVID-19 outbreak.

"Both our nations possess the power of democracy, with a clear vision to move forward. That India and Bangladesh move forward together, is equally important for the development of this entire region," he said.

"We must remember that we've similar opportunities in fields of trade and commerce, but at the same time, we've similar threats like terrorism. The ideas and powers behind such types of inhumane acts are still active. We must remain vigilant and united to counter them,” he added.

Modi, who was wearing a 'Mujib Jacket' as tribute to Bangladesh's Father of the Nation, said that Bangabandhu’s leadership and bravery had ensured that no power could enslave Bangladesh.

"Bangabandhu was a ray of hope for the people of this land and for us Indians," he said.

Under his leadership, common people of Bangladesh across the social spectrum came together and became 'Muktibahini', Modi said, adding Bangladesh's Liberation War had support from all corners of India, from all parties, every section of the society.

The Gandhi Peace Prize 2020 was conferred on Bangabandhu this week.

The war broke out after the sudden crackdown at midnight past on March 25, 1971 in the erstwhile East Pakistan by the Pakistani troops and ended on December 16. The same year Pakistan conceded defeat and unconditionally surrendered in Dhaka to the allied forces comprising the freedom fighters and the Indian soldiers.

Modi said the efforts of the then prime minister Indira Gandhi and her important role in Bangladesh’s freedom war are well known.

Modi said the next 25 years are crucial for both India and Bangladesh. "For both our nations, the journey of the next 25 years in the 21st century is crucial. We have descended from a shared heritage, and we are advancing towards shared development. We have shared goals, and shared challenges," Modi said.

He also invited 50 Bangladeshi entrepreneurs to India to get associated with innovation ecosystem and meet venture capitalists.

Modi also invoked Bengali poets and writers Kazi Nazrul Islam and Rabindranath Tagore in his speech to highlight the common heritage of the two countries.

Earlier, the programme began with the religious leaders from Islam, Hinduism, Buddhism and Christianity reciting prayers from their holy books, projecting a secular image of Muslim-majority Bangladesh.

Bangladesh was founded as a secular state, but Islam was made the state religion in the 1980s. In 2010, the High Court held up the secular principles of the 1972 constitution.

Modi was the guest of honour while Bangladesh President Hamid was the chief guest at the function chaired by Prime Minister Hasina.

In Chittagong’s Hathazari upazila, at least four persons, including two students, were killed and dozens injured when fired tear shells followed by rubber bullets and shotguns to disperse crowd, the Dhaka Tribune reported.

In Dhaka, at least 50 people, including two journalists, were injured when clashes broke out between a group of protesters, mostly members of Islamist groups, and police in the Baitul Mukarram area on Friday.