The Centre has, since last one year, passed on several legislations which directly and indirectly give effect to social and political restructuring 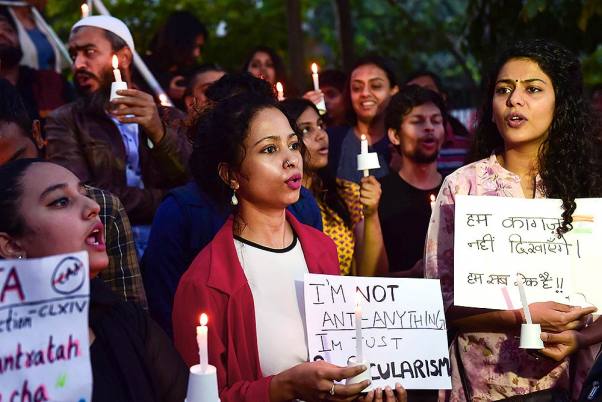 This year, the Indian subcontinent will be reviewed as a researcher’s delight. Repressive state, an agitated civil society, countrywide protests, and an international surfeit of support ---- we have a major case study brewing for all the scholars of democracy around the world.

Look, here it crumbles! True. But to what extent are these pointers effective in mapping such a breakdown? Instead, as we see the country erupt in protests with the students, workers and veterans gather up as comrades-in-arms with the farmers in these wee hours of the blessed year that 2020 has been, the BJP- led central government has managed to move ahead with several bills that did not make enough noise but worked just as subtly to bring up a massive set of changes to the basic fibre of minimalist protection meted out to the most underprivileged. It is at this intersectional concept – that of what construes the underprivileged – that the rights of the economically deprived, the religious minorities, the linguistically challenged and the regionally peripheral fire-play.

While taking off from the anti-Citizenship Act protests earlier this year, that the civil society uproar, bereft of significant consolidation and sustenance, has basically aided and abetted, albeit unintentionally, the government’s long time ploy to change the socio-legal provisions that have kept this global south unit of a developing- underdeveloped fabric running. This has, however, resulted into doing away with the very residues of the welfare state that was once referred to as the Nehruvian model.

Albert Camus, bell hooks And Shaheen Bagh A Year After

Continuing to debate how the modern political formations in India conceptualize the social and political restructuring, the Centre has, since last one year, passed on several legislations which directly and indirectly give effect to this phenomenon. These “transformations” thus warrant a comprehensive breakdown to understand how structural democracy abets crises when there is no actual transformation, for which they are established in the first place. The Jammu and Kashmir Reorganization Act 2019 not only bifurcated the state into two Union Territories but empowered and emboldened the Centre tremendously to legislate on matters not under its legal jurisdiction earlier. This has set an undemocratic precedent, truncating upon the power sharing mechanisms and federal asymmetries forever. This should, however, be read with the growing fetishisation of Kashmiris and an inflated sense of Hindu dominance against Muslim Kashmir, which continues to be exhibited till date.

Second in line, The New Education Policy 2020 was vastly criticized for being exclusionary and impervious. However, it is important to note that the policy is designed to further consolidate the long drawn ideological project which the ruling government cherishes. The current glorification and eventual revival of a largely constructed ‘ancient Indian Hindu culture’, envisaged by the policy, not only solidifies the Hindutva project further but also embeds it deeper, impacting the social fabric of the society as perceived in mainland India.

One instance could be the recent amendments to the Medicine Bill 2020 that include consolidating and setting up a national commission to control the education and practice of the Indian systems of Medicine that now has a huge diversion of funds towards the study of Yoga and Ayurveda while the country still reels under underpayment of doctors and amenities crunch at public medical facilities. It is not to hold any prejudices towards alternative medicine, but what stands alarming is that the Bill aimed at ensuring ease of access for the public and curbing corruption in medical practices does not have anything concrete except the continuous mention of a centralised board to look after further encouraging alternative medicine amidst a pandemic that has got the whole world engrossed into improvising clinical healthcare.

History bears witness to the fact that any totalitarian regime harbour on the construction of “suspect communities”. The application of extraordinary laws has always found minorities at the receiving end. While in India, history hangs high on Muslim community and it has been the first to be brought under the purview of such laws. The changes in UAPA, which gives a state-wide authority to arrest anyone deemed as a suspect by the state. The numerical analysis of all the arrests under such laws refer to a worrying trend that it has always been a tool of repression to be unleashed against the minorities. The Citizenship Act should thus be understood in this broader framework to understand how it would become another exclusionary instrument to perpetuate violence against what have been construed as the suspect community.

In the similar vein, while the Essential Commodities Amendment Bill 2020 envisions vesting more powers to the Centre to regulate the production in certain sectors and empowering to decide upon what would constitute the essential commodities, an attempt that had been in motion since late January 2020, the pandemic only paving a smoother way for the same. Similarly, All of the recent changes in existing laws like the Companies (Amendment) Bill- which relieves privileged defaulters from punitive action brought about by the state and additionally dilutes the existing Corporate Social Responsibility provisions towards aiding the corporates, The Foreign Contribution (Regulation) Amendment Bill, The Insolvency and Bankruptcy Code (Second Amendment) Bill that imposes the burden of huge reductions to defaulters on loans on public sector banks.

The Jammu and Kashmir Official Languages Bill, the Industrial Relations Code and the Major Port Authorities Bill reflect a centralizing trend: empowering Centre more than actually bringing in any transformational mechanism. Apart from setting up boards at local levels with Centre- nominated representatives to make decisions on port properties, it also conveniently renamed the Calcutta port (one of the denoted Major Ports) after Sangh ideologue Shyamaprasad Mukherjee. The board, according to the 2020 amendments, is also the adjudicating body in public-private partnership (PPP) disputes, leaving to imagination whose interests it will seek to protect in case of contentions.

The slow injection of absolute centralising tentacles of the state under the Narendra Modi government will now set the national and diplomatic behaviour of India at an antagonistic parallel against the course and crux of global solidarities against inequality and oppression. While gauging the implicit, these bills passed over this period of 1 year did not make it to the angst of the protesting mass, however, have been equally deteriorating to those three ancient words we hold so dear: liberty, equality, fraternity.

Under the garb of pandemic and protests, the current government passed several other laws, like the anti-conversion law, which couldn’t gain much attention yet hold significance as far as the state-society relations are concerned-potentially changing the democratic discourse in India forever. All of the recent changes in existing laws, and several newly added ones, reflect a centralizing trend: empowering the Centre more than actually bringing in any transformational mechanism.

While the Opposition boycotted the parliamentary proceedings protesting against the new farm rules, the government passed the Jammu and Kashmir Official Languages Bill 2020 in the month of September. Although, the Act added Kashmiri, Dogri and Hindi to the official languages list, however, the inclusion of Hindi and the promotion of Devanagari script created apprehensions in the civil society bodies who perceived it as threatening and detrimental to further introduce centralizing tendencies to the vernacular practices.

An amendment aimed at further amending the Foreign Contributions (Regulation) Act (FCRA), 2010, prohibits the transfer of any foreign contribution to another person. It aims at centralizing the administration of foreign contributions while establishing a strict control over the voluntary organisations and political associations that receive such contributions. The move has also resulted in the merger of three nationalized banks which has received a huge backlash. The government in order to hide its incapability to recover loans from corporate houses has proposed to merge banks and consolidate their governance. This would however squash the banks functional aspects and hamper the employment in the banking sector.

The Industrial Relations Code 2020 sought to combine the provisions of three erstwhile laws. These are – the Trade Unions Act 1926, the Industrial Employment (Standing Orders) Act 1946, and the Industrial Disputes Act 1947. The code not only undermines the purpose of unions by reframing the constitution of representation but also the culture of strikes at such spaces. It does this by asking for a sixty-day advance notice prior to starting a strike and expanding the definition of strike to include a concerted leave by 50 per cent of workers or more on a given day. The number of workers to be employed in order to be answerable to the government during lay-offs and retrenchment has been raised from 100 to 300, in the pretext of encouraging employment whereas, this raises the number of workers who are now set vulnerable to unconditional lay- offs from 99 to 299 without any public monitoring.

These are only a few instances of the government’s thought-out and perpetual attempt at ridiculing any notion of bettering the public’s standards of living, feeding incessantly into the privileged pockets. As the year ends, it stands to be reviewed as to what extent the mass will interpret these legislative adventures in these extraordinary times.

(Views are personal, and do not necessarily reflect those of Outlook Magazine.)