A Much Loved Show Goes Online!

Thanks to the lockdown that Covid has forced us into, I watched the show online and believe me, despite my exposure to what may be considered more sophisticated forms of theatre, I was entranced. 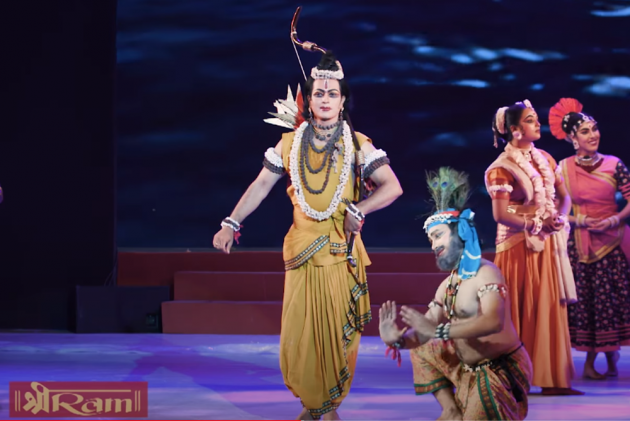 Few of us who have grown up in India in the era before dish television have not been enchanted by some form of a performance of the Ramayan. I remember, as a young girl, watching with mouth literally hanging open, the characters of Ram, Sita, Lakshman and Ravan, not to forget the boisterous Hanuman, coming alive on stage in a Bharath Natyam steeped ballet performed by the dancers of Kalakshetra. However, having grown up in Delhi, I was never exposed to the live performances of the Ram Lila that spanned the 10 days of Navratri and ended with the thunderous explosive destruction of Ravan on Vijaya Dashami evening.

But thanks to the lockdown that Covid has forced us into, I watched the show online and believe me, despite my exposure to what may be considered more sophisticated forms of theatre, I was entranced.

The Sriram Bharathiya Kala Kendra which organises the show has been doing so for the past 62 years. “When my mother got married and moved to Delhi, she brought with her the memory of the 10-day Ram Lila that was performed at the Benaras Hindu University where she had been studying. She was keen to start a Sampoona Ramayan in Delhi, and luckily both my grandfather and father supported her,” says Shobha Deepak Singh, current director of the show. Thus ||à¤¶à¥ÂÂÂà¤°à¥ÂÂÂ Ram|| A dance drama based on the life of Shri Ram, was born. “I got involved 50 years ago, while in my teens,” Singh says, “My sisters and I were part of the monkey troupe, as there were not enough dancers in Delhi at that time.” While assisting the dancers backstage as part of her duties, she realised that quick changes for the main protagonists from royal costumes into simple homespun clothes suitable for their forest sojourn was a chaotic experience as jewellery would get caught in clothes and hairdos. Velcro and artificial flowers were among the modifications introduced, but the show has been evolving every year, Singh adds.

Today, the original Tulsidas script has been abandoned for a simpler Hindi narrative, and many dance forms have been added to the repertoire.

When the lockdown and the need for crowd control made it seem as if the show would not be staged live, Singh swung into action, deciding to film the entire two-and-a-half-hour performance. Her own experience as a photographer of the performing arts with three impressive books to her name, came in handy as she got the cameras into place and made sure no movement or nuance would be missed. The Ramayan did get an official nod for a live performance, but the filmed version offers its own magic. For one the video backdrop that shows changing scenes as the story progresses is much more effective on film; as are the expressions of the actors which would perhaps be lost to those unable to catch a prime seat at the live show.

Though it starts off slowly, with a routine set of dances, by the time the young heroes wander into Janak’s garden and Ram locks eyes with Sita, the spell is cast. The actors suit their roles wonderfully. Watch the scene between Kaikeyi and Manda, and you will know how well lighting, contrast and body language are used to pull at your emotions.

Watching the video version of ||à¤¶à¥ÂÂÂà¤°à¥ÂÂÂ Ram|| A dance drama based on the life of Shri Ram on YouTube is an immersive experience. The dance forms that range from Dandiya and Garba to Kalaripayatt, Kathakali and Mayurbhanj Chau, the raga based music that is yet light enough to convey the emotion required and the dialogues add their magic. Goose flesh is guaranteed as the much-loved epic comes alive. If you can peel yourself away from the blood and gore on streaming channels, log on to on YouTube. And discover the magic of storytelling through our wonderful spectrum of art forms.

Usha Venkatraman has quite another version of the Ramayan ready to show. Again, using the lockdown as a means to push her creative mind to the next level, and working closely with dancer Anupama Devarajan, Venkatraman has put together an online version that combines her knack of storytelling with puppets to stand in for characters, and Bharat Natyam by Devarajan to take viewers through the epic story. Titled Ramayana Through the Eyes of Compassion, the hour-long show has used versions of the Ramayan by C. Rajagopalachari, Devdutt Patnaik and Arshia Sattar for reference to create the text for Venkatraman’s narrative, and has music sourced from the archives of the Bharatnatyam Kalalaya, Mumbai. Original choreography and live singing add their heft to recreate drama through dance. The compassion comes in as Hanuman’s point of view.

Premiering at the Powai Fine Arts and Chembur Fine Arts Societies in Mumbai, the show also has a few bookings in America.

The entire show will be online post-Diwali, for those who find themselves wanting more!