When I joined Andaman and Nicobar Police as its head in December, 2020, I was not prepared for the two surprises that awaited me here. First, it was difficult to believe that the Islands Union Territory, so beautiful, had the highest overweight and obesity rates in the whole of the country. 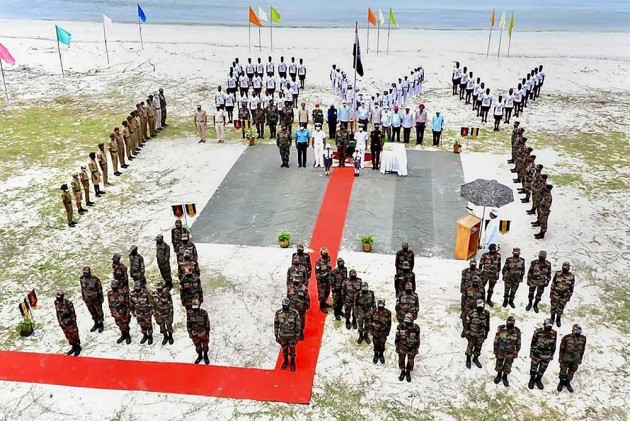 Before I joined the Police service in 1987, I used to think that Policemen are fitter and stronger than people in general as they have a lot of physical input in their training and daily work schedule. I no longer think so.
On the contrary I am convinced that policemen are worse off as far as physical fitness and wellbeing is concerned. When I joined Andaman and Nicobar Police as its head in December, 2020, I was not prepared for the two surprises that awaited me here. First, it was difficult to believe that the Islands Union Territory, so beautiful, had the highest overweight and obesity rates in the whole of the country. According to National Health Survey 5, 45% of men of Andaman & Nicobar and 38% of its women were overweight or obese. These figures are the highest for the population of any state or union territory in the country.


More unacceptable was the fact that Policemen in the Islands are worse off, even compared to their civilian counterparts in fitness and wellbeing. Policemen of the Union Territory is more overweight or obese than other people in the Island Territory making him more prone to chronic diseases including Cancers. Andaman & Nicobar Police carried out possibly the first health survey anywhere in the country where every serving Policemen including its Director General of Police, all IPS officers and policemen of all ranks underwent physical examination and measurement. Excluding those who were on leave or were absent, 4,304 of 4,383 police officials underwent health and physical examinations in January, 2021.


Every Police official was measured for height, chest, waist and we could ascertain their body mass index, waist to height ratio and chest expansion. The results of the first ever health survey of any Police force in the country were not good. While every individual is expected to have his waist equal to half of his height or less, only 1,648 or 38.3% had their waist equal to or less than 50% of their height. As many as 61.7% policemen had their waists more than 50% of their heights. It is generally known that those with waists more than 50% of their heights are vulnerable to metabolic diseases which include diabetes, high blood pressure, impaired cholesterol, heart disease, dementia and even cancers.


The performance of Policemen on the parameters of Body Mass Index (BMI) was worse than their civilian counterparts. BMI, as we know, is the division of one’s weight by the square of one’s height in meters and is known world over as good criteria for evaluating one’s physical wellbeing. Only 2,068 or 48% of Police officials were in the category of the Normal Body Mass Index, which is between a BMI of 18.5 to 24.99. As many as 50.95% or 2,193 of 4,304 police officils were either overweight or wose, Obese. As many as 1,818 or 42.2% were overweight, being in the category of BMI between 25 and 30.


Beyond a BMI of 30 is the most dangerous category of health wellbeing called obesity. There are three categories of obesity classified as obesities category I, II and III. Those whose BMI is more than 30 but less than 35 are Obese Category I. In A&N Police as many as 342 Police officials or 7.9% were in this category of Obesity I. 31 Police officials or about 1% of the entire force were in the category of Obesity II which is when BMI is between 35 and 40. Obesity Category III is the most dangerous when the BMI of a person is beyond 40. Two officials of the UT Police were in this category.


One way of avoiding the dreaded cancer disease is maintaining healthy weight. For every Policeman to be recruited in any Force there is a requirement that his chest expansion should be at least 5 centimeters. Every Policeman fulfils this criteria at the time of recruitment tests. During the physical examination and survey it was discovered that only 699 of the Police officials or 16.2% of the Police Force today had chest expansion of 5 centimeters or more.


This means their health and wellbeing have deteriorated to the extent that if these police officials appeared for recruitment tests today as many as 83.8% of them will be rejected only on this count that their chest expansion is not what is the minimum prescribed for recruitment of any police official anywhere in the country. Those in the category of Obesity class II and III were sent for a detailed medical examination and their reports indicated to them the health issues including diabetes, high blood pressure, impaired cholesterol and other health impairments. Those having health infirmities were told to take precautions and improve their health.


As there have been some restrictions due to the Covid pandemic in the year 2021, A&N Police could not organise detailed health awareness for every police officer. We have initiated personal counselling for those in Obesity Class III and there have been dramatic improvements in the health of officials in this category. We are expecting that others with health impairments will take inspiration from them and improve their health. In the meanwhile, it was sad for the Police force that one Inspector of Police who was in Obesity Class II has died of a stroke at the age of 53 years. He had a history of obesity, blood pressure and diabetes. Awareness is being created among police officials that being in good health is of utmost importance in everyone’s life. Maybe it is the most important requirement in one’s life.


(Satyendra Garg is Director General of Police, Andaman & Nicobar Police, Port Blair. Views expressed in this article are personal and may not reflect the views of Outlook Magazine).