A Wine-drinking Ex-Muslim's Defence Of The Tablighi Jamaat

I abhor the views held by the Tablighi Jamaat, and I wish for their ideological defeat across the world, but I will still defend their right to equality – to be equally miserable in thought and in ideas as other religious groups, and to be treated equally when they default in their actions. 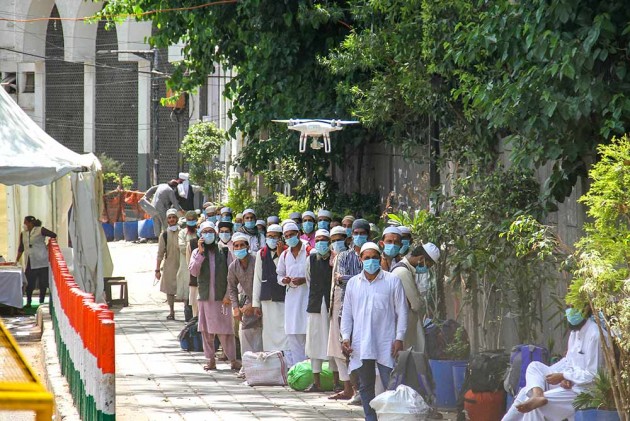 The title is part truth, and part creative liberty with an objective of a satirical take. I do, without any apologies, enjoy the charms of one of the most potent of human inventions –- the wine and its sister drinks. This trait of mine -– a giver of a buzz of inspiration best summarised by the Greeks as entheos –- has, more often than not, gotten me in trouble with religious groups like the Tablighi Jamaat. So for me, to have found myself in a position where I have to defend a group from the communal narrative that is spun around them, although clear in thought, is a rather discomforting scenario in public life. But one derives one’s conviction and subsequent satisfaction from the former and latter is just the performative.

Like every other child who has ever grown up in a Muslim household, I had a maulana employed to teach me the Quran in Arabic without comprehending, of course, what the text really meant. And like every other boy who has ever followed that afternoon lesson blabbering indecipherable sounds -- indecipherable to the maulana also, by the way -- with a game of cricket in the evening, I was very adept at sighting a group of mustache-less bearded men clad in pastel coloured long kurtas and pyjamas tied higher than their ankles, and running off from the playground. After the unopposed surrender of his game, a young boy’s priority, then, is to save the rest of the evening by avoiding getting held into a group of men asking him some deep questions about the "purpose of life" that possibly they themselves do not understand. This would be followed up by an "invitation" to go around the neighbourhood between Asr (the early evening prayer) and Maghrib (the late evening prayer) with the group preaching the word of Allah –- as if that abrupt end to the game of cricket was not torture enough.

Unlike most Muslim boys, however, my bone of contention, to put it lightly, with the Jamaatis did not end at the ruined cricket evenings. I soon grew out of the idea of a divine creator and became what the Tablighi Jamaatis would abhor the most -– murtad -– an ex-muslim, and I have been a vigorous critic of the extremist practices of the Jamaat and their allies since then. Pursuing my undergraduate at the birthplace of Students Islamic Movement of India – Aligarh – my criticism earned me several threats, public shaming, and also a criminal case for "hurting religious sentiments" of a group of otherwise strong, brave, and young men. I am yet to be acquitted.

Some days ago, however, the fallacy of imagining that I can dissociate from the Muslim community by branding myself as an ex-muslim once again came to life. Nizamuddin Markaz -– the headquarters of the Tablighi Jamaat -- came to be known as the "hot spot of epidemic in India". The description was quite fitting. Some two thousand Jamaatis -– belonging to various nationalities –- had congregated at the Markaz and then travelled to various parts of the country, carrying the virus with them -- no, not the proselytization here, I mean the real, the novel Corona virus. As per reports on April 2, the meeting had contributed to around 20% of all cases of the disease in India.

What followed was not surprising. The suffix of ‘jihad’ was once again invoked and the case was called ‘Corona Jihad’. It soon was portrayed as if had the congregation never happened, the motivated thali-banging would have worked and we would all be to our business as usual by now. With a Muslim name that earns me hatred of the Hindu right, infamy as an unapologetic blasphemer that earns me hatred of the Jamaat, and being a staunch secularist that earns me hatred from both, I found myself getting engaged in what appeared as a "defence of the Tablighi Jamaat".

That is, although, not entirely true. It cannot be said that the Jamaat was not grossly irresponsible in their conduct amidst the global epidemic. The Delhi police with the Nizamuddin Station sharing a wall with the Markaz building can also not be absolved of their negligence. It is, however, a case of communally driven double standards to criminally charge the Tablighi Jamaat while turning one’s face away from the numerous other gatherings -– some featuring lawmakers and rich celebrities -– that have taken place in the country since the epidemic hit us. What started with the racist title of "Chinese virus" in the White House, had become the anti-muslim ‘Corona Jihad’ in India – imagining a group of Indian Muslims as being part of a conspiracy of spreading the virus or of being apologetic of the Jamaat’s activities in general. I was included in the latter group.

Irony is the salt of life, and it is on the basis of the same principle of secularism that I have vehemently criticised the Jamaat in the past, that I defend them today – not for what they did but from the communalisation of the epidemic. I do not think they should be treated any more harshly than groups who organised the Ram Navmi celebrations that were held at Bhadrachalam which were, it is important to note, attended by two state ministers of Telangana.

A wine drinker can defend the Jamaat because the secular narrative is, by definition inclusive of people of all beliefs while the extremist and dogmatic narratives of that of Tablighi Jamaat and the Hindu right are exclusionary and intolerant. I abhor the views held by the Tablighi Jamaat, I am strongly opposed to their fundamentalism, to their aggressive preaching, I am disgusted by them for brainwashing kids into a cult like behaviour, and I wish for their ideological defeat across the world but I will still defend their right to equality –- to be equally miserable in thought and in ideas as other religious groups, and to be treated equally when they default in their actions. While the Jamaat and their affiliates advocate against human rights and for the sharia, and while the Hindu right violently pushes the Hindutva agenda upon the nation, one should not hesitate at all to make the secular case against the communal narrative.

Incidents like that of the Tablighi Jamaat tell us that the termites of hate have spread so deep in our society and they have dined for so long that even in the face of a calamity, we will find a way to generate hate towards the usual target – the Muslim. It is indispensible in a context such as this, that the liberal narrative unapologetically maintains its inclusive values and does not yield to the threat of being associated with a dogmatic group such as the Tablighi Jamaat. By standing for the principle of secularism and equality, it is possible to exemplify the moral superiority of the liberal narrative that we must claim back and that the country so gravely lacks at this point. One cannot expect an exclusionary narrative to be defeated by another exclusionary stance – the people of the Jamaat, although opposed to the values of secularism; have every right to be treated in a secular manner under the law. It is only by building a stance of inclusivity that dogma and politics of hate can be tackled.

(Fahad Zuberi is an architect and academician, invested in the realms of socio-political discourse and cultural criticism. Views expressed are personal.)