A Wrong Grammar Of Politics: How Congress Has Forgotten The Art Of Waging A Political Fight

While the Congress has adopted a pattern of promoting leaders who conform to certain new-age mantras, a tactic which might work well in the corporate world, it’s most likely to fail in politics. 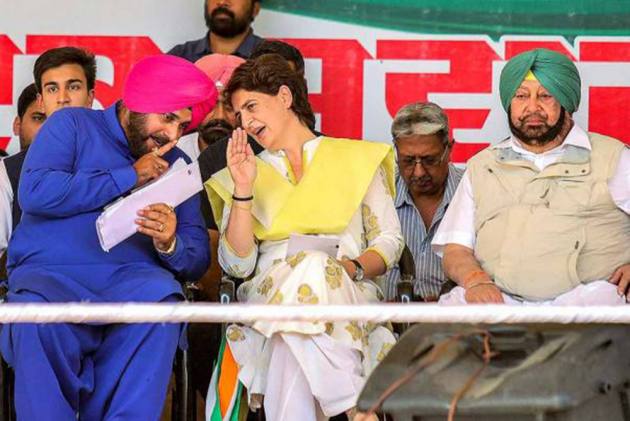 The word ‘grammar’ usually evokes an idea of a logical structure. Politics or ideology is not just a lexicon—not a mere set of words. The only way those words make sense is if they are arranged according to the rules and ordering principles of that grammar. But of late, we have been witness to multiple events relating to the Congress that seem to bear no relation to such a logical ordering. Political watchers, for instance, are surprised at the indulgent treatment given to Navjot Singh Sidhu by the Gandhi family. The cricketer-turned-TV personality-turned-politician was a multiple-time BJP MP and even a member of the party’s national executive, before switching to the INC in the lead-up to the 2017 Punjab Vidhan Sabha elections. Sidhu has made no secret of his ambitions, and this has put him on a collision course with Captain Amarinder Singh, who has long been the face of Punjab Congress.

Why, people are asking, would the Congress leadership anger a tall leader like Amarinder Singh, in favour of a relatively recent BJP import whose actions seem guided more by naked personal ambition rather than any great concern for the Congress or its ideology?

This, however, is the wrong question according to the new generation of the Congress leadership. Not just Sidhu: there is a clear pattern of promoting or relying on leaders who conform to certain new-age mantras, captured by words such as ‘dynamic’, ‘go-getter’, and ‘changemaker’. These qualities, which might work well in the corporate and business world, have a record of translating rather poorly into politics. Take, for instance, ‘Team Rahul’: it was and is populated by leaders who embody this management-inspired style. Hence you see Jyotiraditya Scindia, who had unparalleled access to the Gandhi family and enjoyed great success in the Congress, jump ship to the BJP when his dream of being chief minister, or at least being nominated to the Rajya Sabha, was thwarted. Or take the case of Sachin Pilot, who regularly threatens to split the party and bring down yet another Congress government. Admittedly, he was in the doghouse in terms of finding his ambitions thwarted in a way that he feels aggrieved. But seen on a larger scale, he was deputy chief minister of a major state at a young age, enviable by any standard in politics. But perhaps that falls short of corporate-style personal roadmaps, where he ought to have become CEO (!) of Rajasthan by this time. Or consider Jitin Prasada, recently seen as Congress’s poll in-charge in Bengal, who has had no compunction in switching to the BJP, even in the aftermath of its disastrously inept handling of the pandemic, in a bid to jumpstart his stalled political career.

Where, one might ask, is ideology in all this? How can these leading lights of the Congress, who the party projected for years as new faces in Indian politics, and who were furnished with ministerships and other lucrative positions, and enjoyed great access to the Gandhi family, jump ship to a party as ideologically opposed as the BJP? While the change in their political colours appears unfathomable to those who still see politics as an arena of ideas and values, for these new-age leaders, trained in a modern corporate style which focuses on ‘results’, ‘solutions’ and ‘personal growth’, ideology is, at best, a pragmatic PR toolkit to win public support. Or more accurately, they are ideological, in the sense of having fully adopted the reigning neoliberal value system, which stresses ‘governance’ over deeply-felt politics and ‘competence’ over commitment, and places personal achievement at the apex.

According to this value system, politics would be much improved if only ‘good people’ from other walks of life enter politics to ‘cleanse’ it. More so, if these good people are highly credentialed (preferably from top foreign institutions) and successful at business or in corporate life. Not only does this way of thinking blur the difference between politicians and technocrats, it also lazily reduces complex problems like corruption to a lack of ‘individual ethics’, instead of the institutional, historical and social problem it is.

Interestingly, the Congress’s adoption of this new value system has coincided with the most spectacular electoral downturn in its history. It is uncanny that as the newer generation of leaders progressively took over the party, after the 2009 Lok Sabha elections, the party lost its ability to connect with the masses (including the middle class). On the other hand, the BJP, for all its adoption of high-tech campaign strategies, at its core projects an essentially political, not corporate, image. Ascension to the higher rungs of party and government is virtually reserved for the ideologically committed and proven, rather than seasonal technocrats. And while the BJP has acquired many Congress turncoats in recent years, they haven’t come to dominate its homegrown leadership—barring stray cases like Himanta Biswa Sarma in Assam, who can be explained in terms of cold pragmatics. More pertinently, the turncoats who have done best in the BJP, like Sarma, are highly political operatives, who do not see politics in terms of standards of excellence more suited to the corporate domain.

There is undoubtedly an important role for domain experts in politics, in that effective leaders rely upon their advice in taking decisions. Today’s BJP clearly lacks this quality, which reflects in its poor governance record and abysmal economic management. This, however, does not mean that ideologically committed and proven leaders be treated as “old-fashioned” liabilities. The grammar of politics is not the same as the grammar of corporate life: frequently switching jobs to leverage one’s position in order to negotiate a higher ‘package’ might be laudable in corporate life, it has no place in politics.

This is the crux of the debate on Sidhu: those schooled in the new, corporate-inspired grammar of politics see him as a go-getter who is asking for a suitable price for what he “brings to the table”, in terms of his public speaking prowess and support among sections of the Punjabi youth. This is seen as laudable as he “knows his worth”, much like an ambitious person in corporate life should. On the other hand, politically grounded observers are aghast that an opportunist and turncoat has the ear of the Gandhi family, and is being accommodated even at the expense of a seasoned politician like Amarinder Singh.

While Rahul Gandhi is to be lauded for being a rare leader who takes the fight to the RSS, he and the wider Congress leadership must realise that politics in a society like ours is not merely about managing people and marketing goods; marketing strategies matter of course—a Prashant Kishor may have his role—but they matter only insofar as they come with clarity about the direction you want to impart to the society, about the nature of political community you want to construct. The inclusive idea of India and a fair, just social system is one kind of political imagination, while political Hindutva and communalism in general is its antithesis. The Congress, being the prime mover of the inclusive Nehruvian idea of India, can hardly afford to forget that the fight against the RSS is essentially a political fight. The RSS, instead of treating the idea of politics as some kind of unwelcome substance, has consistently centred it. Some aspects of Modi’s style of functioning may not be fully to the liking of the RSS, but they know he remains deeply committed to political Hindutva and has demonstrated his capacity to deliver in that direction, including through the deft use of marketing strategies and technology. It’s indisputable that political power here is wedded to a vision—the argument can only be on its contents.

It is a now-or-never moment for the INC to realise that just as you cannot write correct Hindi by following the rules of English grammar, you also cannot do serious politics with a managerial mindset.

(Purushottam Agrawal is a Delhi-based writer and historian of ideas. His latest book is Kabir, Kabir [Westland, 2021]. Ritwik Agrawal is a doctoral student of philosophy and cognitive science at the University of Arizona. Views expressed are personal.)