With the elections advanced by a month, both BJP and Cong are in disarray. 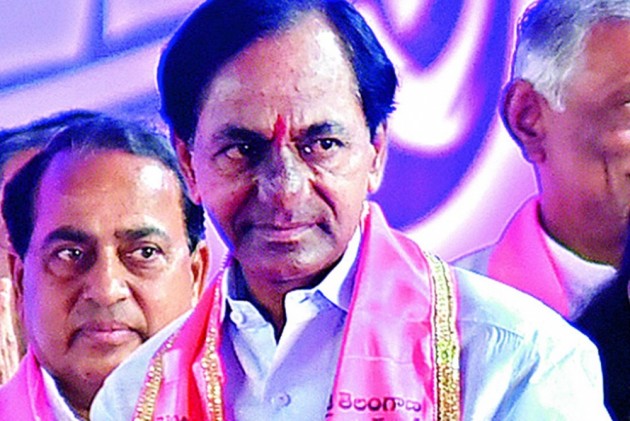 Despite the setback it suffered at the hands of the BJP in Dubbak Assembly poll not so long ago, the ruling Telangana Rashtra Samithi (TRS ) looks more than comfortable to retain the cash-rich urban civic body, the Greater Hyderabad Municipal Corporation (GHMC).

The decision of the state election commissioner to hold polls next month, advancing them by more than a month, shall certainly prove advantageous to the ruling clique. Simply, because the entire Opposition is in total disarray so the announcement to hold GHMC polls on December 1 and its results on December 4, has come as a rude shock. Neither they have time to identify potential candidates to field for a 150-strong corporation, nor the campaigning time.

“Our victory is like writing on the wall.  In spite of criticism over mishandling of the recent devastating rains, the state machinery could successfully take up repair works of main thoroughfares as well help those affected due to flash floods with Rs 10,000 to each household,” said senior TRS leader Palle Rajeshwar Reddy.  He also finds Opposition criticism over advancing elections ridiculous.

The ruling party’s confidence is in fact, borne out of its all-weather ally All India Majlis-e-Ittehadul Muslimeen (AIMIM)’s support.  It is sitting pretty with complete control over the situation as it’s combined strength in the outgoing GHMC is little over 140 of the 150. If the TRS has managed to bag 99 seats, then its ally AIMIM 44 in the 2016 polls. So far, both the parties have no problem as far as finalizing the list of contestants is concerned. The TRS has already found some non-performing members, who will be replaced with winnable candidates. As far as the AIMIM is concerned, it too should not have any issues in replacing or retaining en block as per the wishes of its leadership.

The problem only arises for the BJP, though it is riding high on Dubbak win. It had just four members in the last GHMC body. To unseat TRS-AIMIM combined, the BJP needs to win more than 50 per cent of wards of 150, which, as of now looks impossible, until some miracle or wave that may favour the BJP.

Similarly, the Congress, which held a sway over GHMC till the state was not bifurcated, is in a hopeless condition. In spite of its claims over separate statehood, there are no takers. “We are going to create a tsunami in the upcoming polls.  We, in fact, welcome the ruling party’s move to advance the polls, which bound to boomerang on them.  The urban voter is more vexed with the ruling TRS and MIM.  Haven’t you seen videos going viral of the residents of old city openly using abusive language against their own MIM party and leadership for not coming to their rescue during the floods and also before the pandemic, which created havoc in Old City,” the BJP’s state unit chief spokesperson K Krishna Saagar Rao said.

The party is shrinking at a fast pace and also becoming irrelevant in state politics, for whatever reasons. The party had also lost its credibility due to largescale defections to the ruling party. As a result, the average voter, besides the Congress sympathizer, is pondering over "voting for that party". And, the BJP appears to have been encashing that factor to its advantage and this has been proved beyond doubt in the Lok Sabha elections that were held in 2019 as well the recent bypoll.

Though the Congress won 19 of the 117 Assembly seats and emerged as the principal Opposition, yet within no time it was reduced to just 8, forfeiting its main Opposition role to the TRS ally AIMIM.

Although, the BJP, which has some hold on urban voters, failed to put up good fight in 2016 as the "sentiment wave" which was alive and kicking helped the ruling TRS win that many seats and create a history of sorts in the GHMC polls since its formation.