Thanks to rain, the first Test at Nottingham ended in a draw but India will be happy with Bumrah’s bowling and the grit shown by the lower order 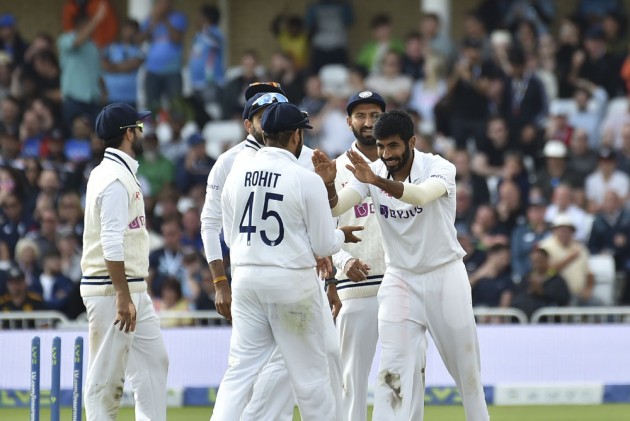 Test cricket returned to our screens after a break of almost 40 days but once again, the fickle English weather played spoilsport and with two full days of play lost to rain delays, the first Test at Nottingham meandered to a disappointing draw. India found a new opening pair who batted with a great deal of assurance, kicking off the series with a solid opening stand of 97.  KL Rahul, making a comeback to Test cricket, flowed on to 84 gratifying runs playing some beautiful drives in the process, while the usually aggressive Rohit Sharma was a revelation in the difficult last hour of the second innings, late on the fourth day, as he stonewalled successfully in a complete role reversal.

England’s batting woes on the other hand, continued with six England batsmen managing a combined total of 5 runs amongst themselves, inclusive of four ducks and it was only Joe Root’s sparkling batting that took them to the safety of a draw.

Like England, the much-vaunted Indian middle order of Cheteshwar Pujara, Virat Kohli, Ajinkya Rahane and Rishabh Pant, also disappointed, scoring a mere 34 runs amongst them, with the first three failing to get into double figures at Trent Bridge. The ball was moving around appreciably at this time and Jimmy Anderson looked at his incisive best as he got rid of Kohli for a rare first-ball duck and threatened to run through the innings.

Joe Root cashed in on the improved batting conditions of the third and fourth days when the ball stopped swinging, with a wonderfully dominant century under pressure, his first at home since 2018.

Root has almost single-handedly carried England's batting fortunes on his shoulders of late and the strain has shown at times in terms of patchy form. He put all that behind him in this Test match and batted with a refreshing positivity, playing some glorious drives.

Chasing anything over 200 In the fourth innings is tricky in England, since average fourth Innings totals in the traditionally low scoring, rain-shortened, bowler-friendly Test matches here, are in the region of around 180 runs only.  Batsmen are never completely ‘in’ and the ball never stops swinging but in this case it surprisingly did so on the third and fourth days.

As a result, the bowlers' lengths got progressively shorter and shorter, till Bumrah magically got the second new ball to move like a boomerang, to wrap up the England second innings in quick time. Bumrah started the slide with a hint of away movement off the pitch, luring Root to play away from his body and suddenly it looked a different ball game. Bowling at 143 kph and ‘Bending it like Bumrah’, he was suddenly in search of a ‘10 fer’ in the match, making a strong comeback after an indifferent showing in the World Test Championship final.

For only the second time in their 89-year Test cricket history, India didn’t pick up a wicket to spin. And surely this won’t be the last time, especially overseas.

Three major takeaways emerged for India from this Test Match. The first obviously, was the settling of the opening pair, something that has traditionally troubled India on past tours. In contrast, it is the middle order that looks iffy at this stage.

The second was the resurgence of Jasprit Bumrah as a destructive seamer in these conditions, with the ability to move the ball sharply at pace, even when others are struggling to do so. The wickedly swinging yorkers that he bowled in both innings to quickly clean up the tail, would have surely warmed Indian hearts. And it promises to only get better when Shami finds his rhythm from the other end.

The third takeaway was the crucial and confident contribution of the lower order that augurs well for India in the matches to come. India is batting deep at this time and in ever-changing English conditions, this is a huge advantage in terms of crucial late order runs

The England batting on the other hand, remains brittle as ever and other than Root the next highest contributions were 29 and 33, respectively, in the two innings, which does not have happy portents for them. If India can bat to their potential and put up the kind of totals that they are capable of, sooner or later this England team will fall apart and we could be looking at some big victories in the Test matches ahead.

Jimmy Anderson eased past Anil Kumble in the list of all-time highest wicket takers in Test matches and now sits proudly atop a mountain of 621 Test wickets taken over a career spanning an incredible 163 Tests. He had surpassed 1000 first-class wickets earlier this season and these statistics are a testimony to his unbelievable fitness levels and hunger for success. In these times of managed workloads for fast bowlers and rotation policies, it is unlikely that these figures will ever be repeated again.

And so, it’s on to Lord’s in three days’ time and India definitely looks to be holding all the aces that they would be keen to exploit to the hilt.

(The author is a retired IAF Wing Commander and a former first-class cricketer. Views personal)