Are Iranian Apples Coming Via Afghanistan Killing The Indian Fruit?

Duty free apples from Iran have been coming to India via Afghanistan under the India - Afghanistan Free Trade Agreement for last two years. In spite of numerous petitions and representations made by the farmers of Himachal and J&K to the government of India these Iranian apples have not stopped coming. Will the Indian fruit survive the odds? 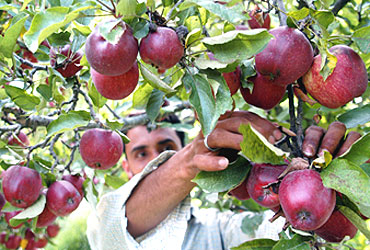 ‘As I sit writing, I can hear outside my window the bells on the necks of mules which have come to carry away the first boxes of the fruit that we sold from the new trees in the orchard near our house.’ These lines are from a letter written by Satyananda Stokes, an American who settled in India and participated in the Independence Movement here, to his mother in the USA on August 31, 1926. That year was a turning moment for the future of apple cultivation, not only for this country but for the entire trans Himalayan region of this sub-continent. It had been proven beyond doubt that the region was congenial for producing world class apples.

Mr Stokes, who is best remembered today for having introduced apple cultivation to the state of Himachal Pradesh, had experimented with different temperate fruits since he settled and bought Barubagh estate from an English lady called Mrs Bates, who used to grow tea on this mountain slope. Stokes for the first time had successfully produced 20 boxes of Red Delicious apples from his apple orchard at Kotgarh and sold them to a trader at Shimla for an equivalent of 3 dollars per box of 6 pounds each. Apple in those days were imported to India from Japan and were consumed by Britishers, Rajas and Mahrajas, who owned summer homes at Shimla. The five plants which he had imported from Starking Brothers Nursery New Jersey in 1916 had ultimately rewarded his efforts by bearing nice juicy red apples, which eventually put an end to the import of Japanese apples.

Himachal Pradesh has come a long way since 1926. Today we have a capacity to produce more than 5 crore boxes but unfortunately the marketing challenges remain the same. The only difference is that in those days Stokes had to use mules to carry his produce to Shimla, today we use motorised vehicles. The other problems like packaging, exploitation by middlemen and the vast difference in what the farmer gets and what the consumer has to pay have not gone away but in fact have increased many folds.

This year there is a hue and cry from all across the state. The morale of the farmers is at the lowest ebb. They are frustrated and demoralised. Apples for which farmers have to wait for at least one year if not more, are compelled to sell their produce at a loss. Apples boxes weighing 22 to 35 kgs are being sold for Rs 500 to 1200 in the local markets. Whereas the consumers in the cities are paying many folds for the same apples. The same strain of delicious apples, branded as Washington apples on the other hand are being sold at Delhi for Rs 4000 per 20 kgs box by the same middle men because these imported apples from USA come at a predetermined price, which is decided and paid in advance at the time of import. The state government is blaming poor quality of apples for the low price but the million-dollar question is why are not the farmers getting good price for the good quality apples produced under anti hail nets. The government should intervene and break the nexus between the fruit traders and the fruit commission agents.

To add fuel to the fire the threat of cheap Iranian apples is looming large on the horizon. Duty free apples from Iran have been coming to India via Afghanistan under the India - Afghanistan Free Trade Agreement for last two years. In spite of numerous petitions and representations made by the farmers of Himachal and J&K to the government of India these Iranian apples have not stopped coming. This year Iranian apples are going to come in huge quantities because of the all-time bumper apple crop in Iran. Indian business men along with their Iranian counterparts have streamlined the packaging and grading of Iranian apples to suit the Indian market. Because of the US sanctions Iranian apples are available at unbelievably low prices. Some of the Indian companies who are into fruit import business have signed agreements to buy Iranian apples at Rs 20 per kg. These apples will start arriving in the Indian markets in the month of September. The Government of India should immediately impose non-tariff barriers to stop the import of these Iranian apples. If timely measures are not taken the apple growers of Himachal, Uttarakhand and J&K will be ruined. If the import of other goods can be stopped under the anti-dumping laws, why not Iranian apples?

The farmers should learn a lesson from this years’ experience and try to improve the marketing set up for the coming years. If the farmers do not come together and catch the bull by the horn, our future is bleak.

I think the way forward is that farmers should come together and organise themselves into cooperatives or farmers producers’ companies.

It is not that efforts were not put in by successive state governments to help the farmers to market their produce but unfortunately these government agencies could not compete with the private sector because of the inherent problems of the government sector. Corporations like HPMC which were set up to look after the post-harvest needs of the farmers were instrumental in introducing telescopic cardboard cartons and trays thus saving the forest cover of Himachal Pradesh. They were the first ones to set up cold stores at terminals markets like Madras, Bombay and Delhi so that the farmers could store their produce in case they did not fetch good prices in the running market. Apple grading machines were set up in the growing regions to standardise grading and packing. In spite of the best efforts of the state governments all the efforts went in vain because HPMC could not compete with the sharks and the unscrupulous middle men who have monopolised the markets for generations. To come out of the shackles of these middle men, fruit auctioning yards were set up by the H.P State Marketing Board in the fruit producing areas but unfortunately these markets have also been penetrated by the same set of middle men from Delhi and have adopted the old methodology of exploitation.

To fight the cartel and secure a bright future for coming generations of farmers, the farmers should come together and build CA stores and pledge to store 25 % of their produce so that the running market can be regulated.

At present our storage capacity in Himachal Pradesh is about 40,000 MT’s   against a production of 6  lakh MT’s, which is minuscule.

The state government should be asked to set up the AJC plant at Prala at the earliest so that the markets are not flooded with culled apples thus ruining the prospects of good quality table apples. A sum of 14 crores was sanctioned by APEDA during my tenure as a board member and the rest of the amount is to be provided by the World Bank under the Horticulture Development Project. Apple Schnapps and pectin are two other products which can be produced at Prala apart from apple juice concentrate. All these products have a good marketing potential.

The farmers should come forward and adhere to packaging and grading standards. The New Zealand and Washington farmers are able to demand top dollars because their standard of grading and packaging are well defined and world class. To compete with them we will have to come together and follow the international norms of grading and packaging. Packaging 35 kgs apples in telescopic cardboard cartons meant for 20 kg is no wise solution to save packaging costs. It will ruin our industry. Let not the greedy middle man dictate our packaging and our future.

If these measures are not taken timely by the farmers and the governments, each year will be a repetition of this year.