As COVID-19 Testing In Bengal Remains Low, Battle Between Mamata And Centre Continues

The West Bengal government’s attempt to ‘dilute’ the COVID-19 death tally in the state has come under severe criticism from various quarters in the society. 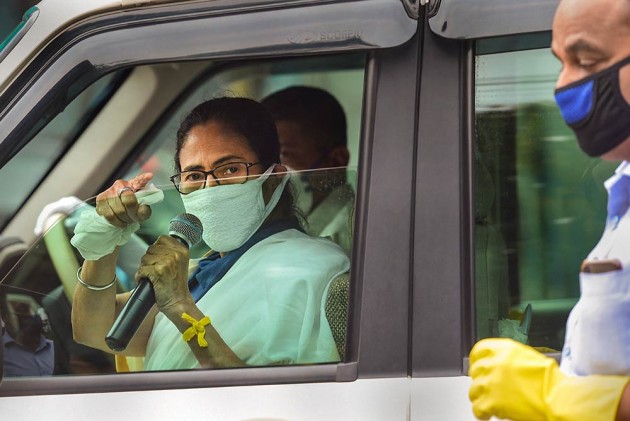 How many people have died of COVID-19 in West Bengal as of now? Is it 33, or 105? If one goes by the state government’s official position, all 105 people who died in the last few weeks were corona positive patients, but only 33 died of the COVID-19 disease. Others were due to comorbidities (pre-existing diseases like diabetes, heart or kidney ailments). The state government would not like to have it on record that the death toll has risen to three-digit figure. Rajiv Sinha, chief secretary, West Bengal, says the numbers are in conformity with the protocol set up by WHO and ICMR. However, the union health ministry dismisses it, saying the overall COVID-19 victims in the country 78% had co-morbidities.

The West Bengal government’s attempt to ‘dilute’ the COVID-19 death tally in the state has come under severe criticism from various quarters in the society. Various doctors’ associations have raised doubts and questioned the veracity of the government’s official data about the cases of infection and deaths. The state BJP leader Dilip Ghosh has even filed a PIL before Calcutta High Court alleging the state government was under-reporting the corona deaths and suppressing the facts. It also questioned the legality of the state’s setting up of an expert panel to audit Corona deaths in the state.

On 5 April, after a spike in the Corona deaths in the state, the government hurriedly formed an expert committee to audit the medical history of the deceased patient, if it was a case of comorbidity or not. The state administration also said hospital doctors treating the corona victims would not issue the death certificate unless ratified by the expert committee. In a social media scoop, it was revealed that in the Murshidabad Medical College Hospital, a duty roster for the doctors from 27 April to 17 May contained an advisory on writing death certificates. “Cause of death will be the usual cause. No mention of Covid in death certificates of Covid positive cases.” It created a ruckus when it was leaked on social media and drew criticism from the Opposition political parties. Mamata Banerjee's government first went into a denial mode by saying it was a minor error that had been promptly corrected. Next, they transferred the hospital super. But the damage was done. The suspicion is growing among the people that the administration is hiding the Coronavirus related facts to give an impression that the state is doing well in its fight against COVID-19 when compared to the performances of some other states like Maharashtra. Gujarat, Uttar Pradesh or Delhi.

Since the pandemic broke out, the Mamata Banerjee government has been fighting on many fronts. It has been caught in a battle with the central government over the issue of West Bengal's ‘poor implementation’ of the lock down in many sensitive areas. What's more, two inter-ministerial central team arrived in the state without any prior notice. They came to Kolkata and Siliguri simultaneously to audit the state administration’s measures to contain coronavirus outbreak and strict implementation of lock down. A war or words ensued. After a few strongly worded letters from the ministry of home affairs officials, the state government relented. The central team demanded all medical files of those COVID-19 positive patients who died with the verdict that they were cases of  co-morbidity. Finally, the number of Covid19 deaths, with or without co-morbidity was put at 105.

That the state has been seeing a surge in COVID-19 infection is no longer a secret. According to the chief secretary, 58 fresh cases have been reported in last 24 hours (29-30 April) and 80% of the cases are from Kolkata, Howrah, North 24 Parganas and Hoogly. All four districts have already been identified as Red Zones. Yet, in the case of testing West Bengal is lagging behind most of the states. According to the official data, the national test per million (TPM) is 483. In West Bengal, on 12 April the TPM was 25 and on 25 April it rose to just 100. As of April 1, West Bengal had conducted only 659 test and of them 37 were found to be Corona positive. By 30 April, the total test number has gone up to 16,525 and the number of active cases is stated to be 572. But many doctors and researchers, like the director of Medical speciality hospital in Kolkata, Dr. Kunal Sarkar, are of the opinion that the state must go for more extensive testing to identify the corona positive asymptomatic persons.

As if the prodding by the MHA and the central teams are not enough, the Bengal Governor Jagdeep Dhankhar and the chief minister Mamata Banerjee have joined a war of letters where both sides are attacking each other. In a sternly worded letter, the chief minister has reminded the Governor that he was only nominated by the President of India, while she has been elected by the people. Governor Dhankhar has also reminded her that she, as chief executive of the state has to act according to the Constitution and the Governor is the Constitutional head of the state. This battle between the two state heads is not new, and won't be the last.