Book Excerpt: 'Sanghi Who Never Went To A Shakha' By Rahul Roushan

In his new book, Rahul Roushan says, 'If Modi has spectacularly failed at something, he evidently has failed to be the despot and Hitler that he is supposed to be in the eyes of the liberals.' 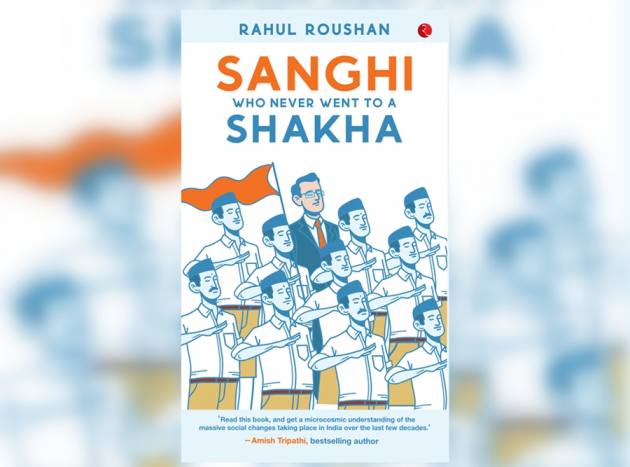 It is a little intriguing why the same ecosystem that was nurtured and nourished well by the Congress party ended up giving it a fatal blow in the popular narrative through the 2011 anti-corruption movement, which had the face of Anna Hazare and brains of the likes of Arvind Kejriwal, Yogendra Yadav and Prashant Bhushan.

But before that, one has to understand what exactly is this secularliberal ecosystem—a term that I must have used over a 100 times in this book. One may wonder how can the same people, who had attacked or criticized the Congress not just in 2011 but even on many earlier occasions, be accused of being part of something that sounds like a Congress-supporting outfit.

The best way to comprehend this is to understand the word itself. Most probably, the first time you came across the word ‘ecosystem’ was in your high-school biology classes. All animals, including human beings, plants, land, the water bodies and the air in a particular geographical unit are defined as parts of an ecosystem. There is a common source of energy in this ecosystem—the sun—and this energy keeps all of them alive. The energy passes from one to another in the form of food chain. If one of the constituent units is removed, the entire ecosystem risks collapsing.

The key element is interdependence, not alliance or union. It is not rare or unimaginable to see the constituents of an ecosystem attacking each other. If you take the case of ecological ecosystem, the food chain itself is proof of how they ‘attack’ each other, even to the extent of killing and eating each other! Essentially, the ecosystem is not a syndicate, where members must stick to some strict rules and where they must not oppose each other.

Take the case of communists, for example, and their place in this secular-liberal ecosystem. While the communist parties have always been the rivals of the Congress party, so far as electoral politics is concerned, the Congress co-opted the communist ideologues to a large extent, right from the time of Nehru itself. As I had mentioned earlier in the chapter on ‘Congressi Hindus’, the communists then gained a crucial foothold in the corridors of power during the Indira Gandhi days.

Many Left-leaning ideologues or intellectuals can point to various incidents when they stood up to the Congress, as proof of their ‘independence’. But that doesn’t negate the ‘interdependence’.

The CPI (Communist Party of India), in fact, didn’t even oppose the imposition of Emergency by Indira Gandhi, though many leftists can say that their ‘intellectuals’ had spoken up. They can similarly cite them for speaking up against Rajiv Gandhi on issues like Bofors and when he tried to censor the press through his defamation bills. They can even claim that their opposition led to Indira and Rajiv losing the subsequent Lok Sabha elections.

However, the truth is that most of them bask in reflected glory. Both Indira and Rajiv were defeated not because of an intellectual uprising but because the rival political parties formed a potent unified opposition, where they let go of various personal and ideological differences to unite under one banner. If the Sanghis had not extended support on either of these occasions, the results could have been different. But, Sanghis are never given that credit by the ecosystem.

There is no doubt that the intellectuals or the intelligentsia of India have criticized and opposed the Congress multiple times, and that’s how they appear ‘neutral’ or ‘independent’ to a common Indian, but hardly any of them have attacked any member of the Nehru–Gandhi family with the same viciousness that they have attacked someone like Modi. The ecosystem has always been soft on the family.

The ecosystem doesn’t harbour any special dislike or ill-will for the Nehru–Gandhi family, because it has only flourished whenever someone from the family has been in power. It’s well-known and obvious that some of them are literally devotees (yes, ‘bhakts’) of someone like Nehru. The historian-cum-cricket-expert-cum-conscious-keeper-cumcolumnist-cum-activist Ramachandra Guha is a renowned specimen of such a ‘bhakt’. When it comes to other members of the family, the fawning devotion might not be as brazen as in the case of Nehru, but the ecosystem players make sure that their criticism is not caustic.

As I write this, the most recurring theme of criticism of Modi by the so-called intellectuals is how there is an ‘undeclared emergency’ in the country. All that they have to offer in support of this claim are hyperbolical histrionics. Modi is a despot who somehow allows them to shout every day on every platform that he is a despot. Comparison of Modi with Hitler is tossed around regularly by the same bunch. Again, Modi is such a Hitler that he allows this comparison to go unchecked, almost on a daily basis.

If Modi has spectacularly failed at something, he evidently has failed to be the despot and Hitler that he is supposed to be in the eyes of the liberals.

Talking of despots and Hitler, one of the first things that led Hitler to acquire dictatorial power was the Reichstag Fire Decree. In February 1933, the president of Germany issued an emergency order, which was based on Article 48 of the German Constitution, on the advice of Chancellor Adolf Hitler, which massively curbed many civil liberties and led to the imprisonment of many of his political opponents.

Cut to India in March 1977, when the president of India issued an emergency order, which was based on Article 352 of the Indian Constitution, on the advice of Prime Minister Indira Gandhi, which massively curbed many civil liberties and led to the imprisonment of many of her political opponents.

Despite this chilling parallel, how many times has Indira been called Hitler by the intelligentsia? On the other hand, Modi is compared with Hitler based on ridiculously loose parallels on every possible occasion.

It’s the same with Rajiv Gandhi too. The ecosystem players never cease to claim that Modi had tried to justify the 2002 post-Godhra riots by saying that ‘Every action has an equal and opposite reaction’. Now consider this—2002 was veritably the first televised communal riots of India, but where is the video clip of this alleged statement of Modi where he is supposed to have justified the killings of Muslims as a revenge for Hindus being burnt alive? In the era of TV, shouldn’t it have been played again and again on TV, and in the era of internet, shouldn’t it have gone viral?

Such a clip is not viral because Modi never said such words to justify the riots. On the other hand, Rajiv Gandhi literally justified the 1984 anti-Sikh riots by saying, ‘When a big tree falls, the earth shakes’. The video clip of him saying so was hardly ever played on TV. It became public more than 30 years after he said it. A lawyer named H.S. Phoolka somehow managed to get a recording of it from the archives, and only then people could see and hear Rajiv saying these words.

The point I’m trying to make is that the ecosystem is meticulously soft on the Nehru–Gandhi family. Poor Rahul Gandhi comes under attack once in a while these days, but it’s mostly because he has not been winning elections. If in the future he becomes the prime minister, the same set of guys would race against each other to write how great he is and how misunderstood he was during the ‘dark days’ of India, when the country was ruled by a fascist Modi.

(Published with permission from Rupa Publications.)