Breaking Biases: Now Is The Time To Reclaim Women Athletes

Apart from being subject to lack of opportunities, women athletes in India also have to deal with gender stereotyping 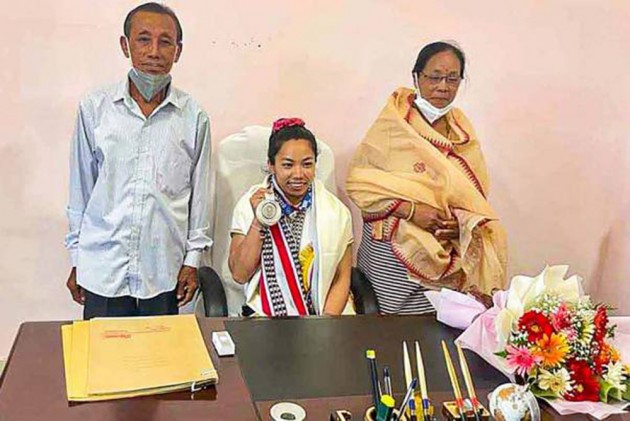 I still recall the day when Karnam Malleshwari became the first Indian woman to win an Olympic medal at the Sydney Olympics in 2000. It was a bronze and the sole medal that India bagged at Sydney. As a child, I was touched by the historic moment when she was lauded on various news channels. This was followed by Mary Kom winning the bronze in women’s flyweight boxing at the London games in 2012 and Sakshi Malik bagging a bronze at the 2016 Rio games in freestyle wrestling. Mirabai Chanu’s win at the Tokyo Olympics takes me back to these moments where perhaps sports became much more than the idea of winning or losing. Chanu’s gender made a difference, and it is also her native state, Manipur, which has had a good spell with development of sports over the years. India’s medal tally at the Olympics further rose when another Indian boxer Lovlina Borgohain wrote her name in the history books on Friday by going into the semi-finals.

The trajectory of these events is a bit more than ‘historic’ for me as a woman. These accolades have come from a purely male domain. Weightlifting, boxing, or wrestling have traditionally been games that men play. However, as a woman, I feel highly inspired by the fact that these women travelled to break stereotypes and brought themselves to the helm of the competition.

What caused this sudden spurt of celebration and jovial fanfare? It is years of dedication to beat biases coming along women’s way.

Nurturing sportspersons is an extremely methodical and systematic process. Across the globe, sportspersons are chosen, irrespective of the type of sport, in their early teens, an age group, that’s very populous in India. Cultivating young talent in India has been a bone of contention over the years. It is not an unknown fact that for women athletes the challenges tend to multiply by ten times. The main challenges they face are socio-economic backgrounds, language, religious, cultural, social and gender biases. Along with the existing system of sports governance and management, issues of “institutionalized gender discrimination” affect pay checks as well as other factors such as how often they are trained, the medical care and coaching they receive and even how they travel to the competitions.

The real gender bias has to do with the attitude of what defines masculinity and what defines femininity. Gender typing is whereby you attribute qualities, characteristics, temperaments, demeanour, and behaviour to gender. It also includes generalising any person, and how they act or should act, based upon preconceived notions and definitions of their gender.

Where do they come from?

Manipur has given its children an opportunity to flourish in games and sports, by levelling the playing field. The state’s sports clubs have been nurturing young talent by focusing on single sports and assisting them with resources. This might be an agent of change but early exposure in the right direction can do wonders. It can be epitomised by the transition of young 12-year-old Chanu, coming from Nongpok Kakching (located at a distance of 44 km from the capital, Imphal) to a professional weightlifter at the age of 26.

Another state which has given India its sportspersons in abundance is Haryana. Haryana has the lowest sex ratio (877) in Indian states and ironically has given India some of the best professional wrestlers, ranging from the Phogat sisters to Sakshi Malik.

India has found remarkable success in its endeavours in a few sports over the last few years but, how long can we ignore that there is a need to go beyond celebrating victories. We must cater to the dreams of women, who are aspiring and thriving as athletes. Further, the advent of social media and the extravagant exposure to global sports has increased the need to change our mindsets.

Increasing the opportunities available for sportspersons in India through professional sporting leagues has made a difference for basketball and badminton. While the Indian Premier League continues to be the be-all and end-all of the Indian sports culture, what Chanu’s story tells us is that we need to pay attention and bring about similar models in other sports.

(Views expressed are personal and do not necessarily reflect those of Outlook Magazine.)