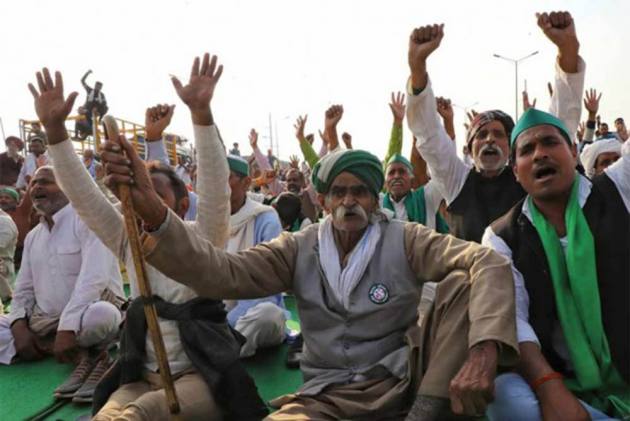 Close to the Ghazipur demonstration forum, Buddhist monks have pitched a tent to lend their support to the farmers’ protest. The maroon-robed monks, who claim to be apolitical with strong roots in the farming community, arrived early December before the government crackdowns escalated. The barricades, ditches, concertina wires, shutdowns, and round-the-clock police surveillance following the January 26 violence, have strengthened their resolve to bolster the movement.

While Hindu seers, akhada religious leaders and representatives of Christian trusts have shown their solidarity by moving in and out of the protest sites, the Buddhists have remained robustly stationed. One is tempted to ask what the followers of Buddha’s teachings have to do with the farmers’ protests. Are they here to surcharge a common cause for a while?

In their spacious tent where devotees trickle in to seek the monks’ blessings, one might think it’s a religious congregation on the lines of Kumbh Mela’s akhadas. Books about Ambedkar, low-caste struggles and Buddhist meditation piled high, it’s difficult to understand how the monks’ presence has morally or politically charged the movement. On easing them into a conversation, the reticent monastics say the protests are shorn of any caste, religious or linguistic affiliations.

While it’s largely a farmers’ protest they say, religious groups and independents can “galvanize collective public action for the common good.” To them, Buddhism has extolled non-violence but not non-resistance. If they are okay showing their devotion at the altar, they must on the streets, too.

“Religion has taught us not to be mute spectators to social injustices,” said an elderly monastic in Ghazipur. “Farming has no religion, and we are only agitating for the right to life and livelihood.”

Despite not being active campaigners on the streets and public squares, the monks have delivered a powerful message: Non-violent protest is as critical to Buddhist training as is the training of the mind and body. Simply by showing up, it’s possible to spark change at the grassroots level.

The monks feel the presence of spiritual leaders has strengthened sacred practices at prayer halls and meditation centres. So here too, they could surcharge the fight for a systemic change.

For the Buddhists, the contentious farm laws—affecting all sections of society—need to be challenged beyond direct action. As “peace activists,” they want to rescue sentient beings from suffering caused by corporatisation of agriculture and erosion of farmers’ sacred ties with the soil.

“The corporatization of agriculture has progressed alarmingly over the last few decades,” said a monk from Etawah. “This is a collective response to farmer suicides, discriminations, exploitation and growing poverty that those directly or indirectly involved with agriculture have faced.”

Some of the monks, who’ve embraced spiritual life in response to these growing inequalities at the grassroots level, feel the protests have spurred a new ethos of compassion through resistance.

Their empathy is reflected in verbal and emotional support to protesters participating in dharnas and tractor rallies, camping out in the cold, or taking part in creative endeavors.

“When someone is roughed by the police, say, it helps to have a spiritual leader calm him down and thank him for his resilience before the doctors or medics arrive,” said another monk.

Considering how inter-faith work has been one of bulwarks of the farmers’ protests, the Buddhists have also been aiding the Sikhs, Hindus and Muslims in organizing langars, and providing other material support such as food and medical supplies for protesters and grassroots citizens.

One of monks said religious leaders could provide bodily protection to citizens by offering lessons on spiritual health and psychological aid at the protest sites, and help in times of medical emergencies given how many of the sites have been cordoned off or allowed reduced access to first aid.

At a time when the spiritual practice of bearing witness is depleting around the world, the monks want to look towards suffering instead of turning away from it. They believe their persistent involvement would not only invigorate the protests, but also offer encouragement to other spiritual leaders in finding creative solutions to social injustices.

(Priyadarshini Sen is an Independent Journalist based in Delhi. She writes for Indian and US-based media. Views expressed are personal, and don’t necessarily reflect those of Outlook Magazine.)