CAA Alone Will Not Affect Culture And Demography In Assam

But the threat posed by immigration is real and Indigenous people of Assam need constitutional safeguard. 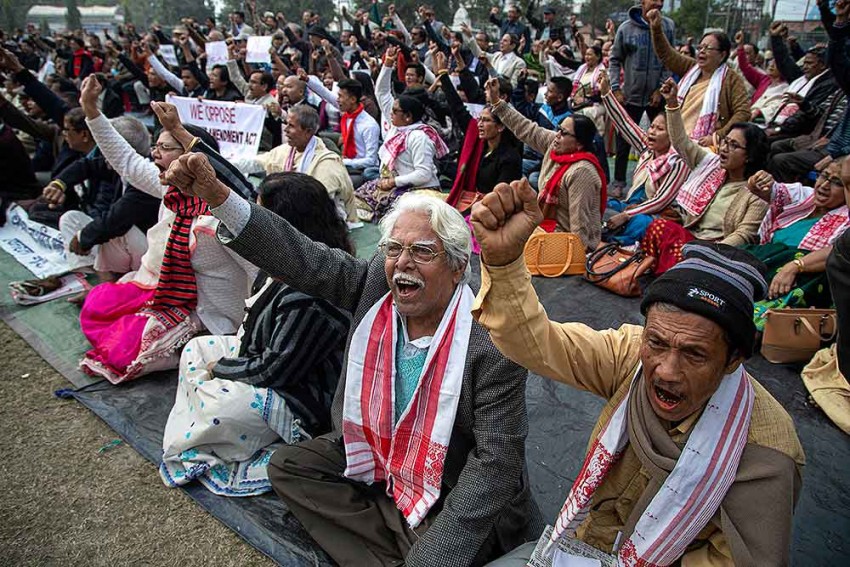 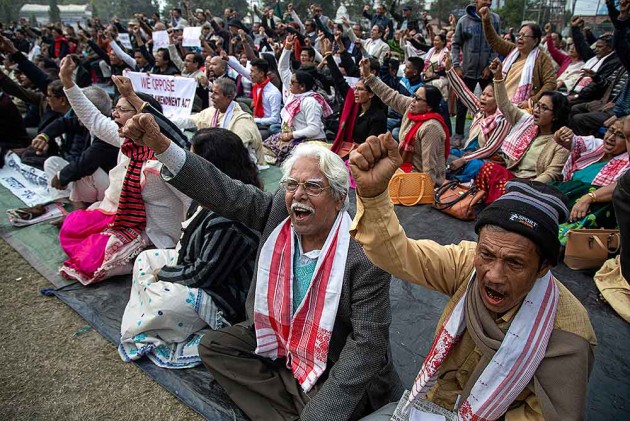 Just a few days before #CAB2019 was placed in Parliament, I got a number of provocative videos, memes and audio clips on social media groups from Assam and the Assamese diaspora. In one such audio clip, a voice purported to be of a girl student of a university is heard saying:

“Peasant leader Akhil Gogoi and a few intellectuals came to us and explained the whole meaning of CAB. Actually, the government is lying to us that only 5 lakh foreigners will be accepted through CAA, but in reality, an additional one crore people will come to Assam, who are rich, belong to upper caste, highly educated, they will rule us; not only our language will vanish but we will lose all kinds of identity…not just jobs but entire commercial sector will be taken away from us… they said ‘you have not read the actual CAB but we have read it; after the bill is passed, anyone who comes from outside can get citizenship just by a simple court affidavit and there is only one day left for us to do anything, if you cannot do anything tomorrow, then everything will be over..”

In a widely-circulated video clip, Akhil Gogoi, who was later arrested, is heard saying said that 1.9 crore Hindu Bangladeshi will come to Assam once CAB 2019 is passed; no MLA/MP/panchayat seat will be in the hands of Assamese; all Assamese will lose jobs and business. About 1.9 crore Bangladeshi Hindus will do work only for Rs 80 per day in the tea gardens, and 30 lakhs of tea garden laborers will be jobless in Assam.

In another meme, a distressed wife asks, “what is CAB2019?”. The husband explains, “Suppose, my neighbour beats his wife, and I give her shelter first, and later I accept her as my wife”. He further explains that 2.5 crore new Hindu Bangladeshi will come to Assam if CAB2019 is passed. The angry housewife reacts that she will fight against #CAB2019 anyway.

Needless to say that these videos are circulated and viewed in millions and has a remarkable impact on the indigenous population of Assam on CAB2019. Noticeably, while the government failed to prevent such ongoing propaganda for more than a year, intelligence agencies could not recognise the association of anti-social elements in this intensive protest in Assam in advance.

The Bill became the Citizenship Amendment Act (CAA) on December 10 and Assam—and other parts of the Northeast—erupted in anger. Shrill cries of protests rang out, most loudly in Assam where five people also died in police firing on protesters.

Is immigration from Bangladesh to Assam a myth? Indeed, not. Immigration from East Bengal to Assam in the pre-independence period and immigration from East Pakistan/Bangladesh have permanently altered the very ancestry of population in many districts of Assam. A silent yet steady settler colonialism displaced numerous ethnic origin people from their centuries-old homeland. Both real-life experiences and results of census data compel an indigenous person to become touchy about “Bangladeshi immigration”. There has been a six-years-long Assam movement between 1979-1985 leading to the death of 855 activists and other people, besides other losses to the people of Assam.

Yet, careful observation of this anti-CAA movement in Assam shows that there are three types of people involved:

1) A large chunk of protesters are indigenous Assamese who do not want any more Bangladeshi immigrants, either Hindus or Muslims. They don't want any more settler colonialism altering the demographic, socio-cultural and religious composition of the state. For them, an immigrant is an immigrant, irrespective of his/her religion or language or nationality.

3) Another group that is happy to accept #CAB 2019 if Muslim immigrants are accepted.

Interestingly, all these three groups are fundamentally different, yet the last two groups are using the sentiments of the first group to make an intense movement against CAA2019. The second two voices are mixed with the first voice, making the anti-CAA protest intensive.

Not surprisingly, these last two groups never raised their voice for NRC re-verification despite knowing the fact that millions of illegal immigrants have managed to include their name and a large section of genuine citizens were left out of the NRC. These two groups also never raised their voice for executing Clause 6 of the Assam Accord, which was meant to ensure constitutional, legislative and administrative safeguard to the indigenous people of Assam. They were also silent on previous amendments to citizenship act in post-Assam movement period, which were pro-immigrant and pro-illegal. These groups have their own agenda rather than making Assam “free from immigrants”.

There has been radical changes in the demographic composition of Assam from 1911-1951 in the pre-independence period. As per census data, this process was slightly slower during 1951-1971 but escalated again after 1971. One possible explanation of this is the now-scrapped IMDT Act 1983 which encouraged new Bangladeshi settlements in Assam. the credit also goes to the inefficient Asom Gana Parishad leadership and vote bank politics played by erstwhile Congress governments.

In the past 100 years (in less than two generation’s time), indigenous people of Assam have become minority in several districts of the state. It is with that emotion that the Assamese people are fighting against CAA2019. They are standing for their rights in their centuries-old homeland and they are not discriminating against immigrant on the basis of religion or language.

First, CAA2019 will give citizenship only to those people who came before December 31, 2014 to India, belonging to Hindu, Sikh, Buddhist, Jain, Parsi or Christian community from Afghanistan, Bangladesh or Pakistan. For decades, many intellectuals or movement leaders have thrown an incredibly big number, such as 40 lakh Hindu Bangladeshis entered Assam after 1971.

However, census-based analysis of population trend by religion since 1901 in Assam shows that out of total immigrants in Assam who came after 1951, only about 10-15 per cent are Hindu Bangladeshis. In a previously published article, much before the publication of NRC, analysing population trend and compositional change in 1951-2011, I demonstrated that Hindu Bangladeshi’s number would be approximately around 5 lakhs. The Assam government also gave out a similar number a few days ago. These 5 lakh Bengali Hindu refugees will have little impact on demographic composition, given that millions of Bengali Muslim immigrants have already enrolled their names in NRC. No doubt, millions of Bangladesh- or Pakistan-origin minorities will be benefitted by CAA2019, but they are residing mainly in West Bengal, Tripura, Delhi, Punjab etc, but not in Assam.

Secondly, analysis of Census data is supported by local experiences found in various districts of Assam. In all districts of Assam, Bengali Hindu villages either remained the same in size or reduced after 1971. In fact, I visited a number of small towns where Bengali Hindu and Muslims were the dominant population about 30 -35 years before. Even in these areas, Bengali Hindus are shrinking either through outmigration to other states or through very low-level fertility. Bengali Muslim villages, on the other hand, always exploded as a result of higher fertility and continuous immigration from Bangladesh.

Thirdly, the movement leaders claim that 1.9 crore to 2.5 crore Hindu Bangladeshi will come to Assam. This is not supported by evidence. In fact, the total Hindu population in Bangladesh at present is 1.4 crore, much lower than what movement leaders project will come to Assam. CAA2019 approves citizenship to those who came to India before 2014, nowhere it instigates to come 1.9 crore new foreigners to come to India. Since Assam has already implemented NRC, it will be not possible to get citizenship for new immigrants. Further, Hindu Bengali refugees do not have a strong social network in Assam, unlike in West Bengal or Tripura. Even in the time of the Bangladesh Independence War in 1971, they went predominantly to Tripura and West Bengal.

Assam is a mini India, a perfect blend of the so-called mainland Indian and South Asian cultures. It is a land of about 115 ethnic communities, speaking 55 languages and dialects. The population size of such communities varies from 72 families of Tai Phake to approximate 30 lakhs of Koch Rajbangsi’s. All of them are not listed as “Scheduled Tribe” but have distinct culture and language and historical continuity in Assam. These communities have been facing a serious threat of extinction due to unabated immigration from Bangladesh. A drastic change in population composition was seen not only in the pre-independence era, but after 1971 too. In fact, hundreds and thousands of villages of ethnic origin transformed to villages of economic infiltrators in the post-independence period. Because of different size and diversity in language/religion/cultures, indigenous people cannot stand well in front of vote bank politics. Contrary to this, immigrant or immigrant origin people can play a decisive role in Assam’s political representation. In several districts of west Assam, political representation of an indigenous community is by immigrant-origin leaders. Such a situation usually fuels displacement of indigenous communities from their native place.

In such a situation, what is the way forward? Will Delhi hear Assam’s heart-rending cries of its own people carrying distinct native culture for centuries together? Will Delhi ensure first the rights of indigenous people while ensuring rights of foreigners? Will Assamese leadership finally deliver Clause 6 of Assam accord, which has been pending for 35 years, in an effective way?

Giving Scheduled tribe status (without harming existing ST communities) to six major communities was an election promise of BJP. This is the time to execute now and bring a major part of Assam under the Sixth Schedule. Reserving land, jobs and political power for indigenous communities should be ensured through laws.

There has been debate over the definition of “indigenous people” in Assam. Considering the diversity of indigenous people around the world, the UN has not provided a strict official definition. Yet, UN permanent forum on indigenous people identifies a few characteristics to define “indigenous people”. Those are: a historical continuity of pre-colonial or pre-settler societies, strong links to territories and surrounding natural resources, distinct culture (manifested in form of religion, tribal system of belief, dress, means of livelihood, language etc.), form non-dominant group and society and determine to maintain and reproduce their ancestral environments and systems as distinctive peoples and communities. These characteristics can certainly be adopted to decide who are indigenous to Assam.

At least 10+ education of girls, particularly from immigrant origin should be encouraged to combat population explosion and ensure quality of life of them. Bangladesh, a Muslim-majority country, has already reached below the replacement level of fertility (TFR less than 2.05 for average Bangladeshi women) by means of improving education and popularizing family planning methods, together with government and non-government organizations.

(The author is Assistant Professor in Population Studies, CSRD, JNU, and can be contacted at nanditasts@gmail.com. Views expressed here are personal. )

Man Breaches Priyanka Gandhi's Security, Gets To Meet Her