Could Trump Prove The Pollsters Wrong?

Many thinking Americans who would not care to admit that they will vote Trump but will do so nevertheless. 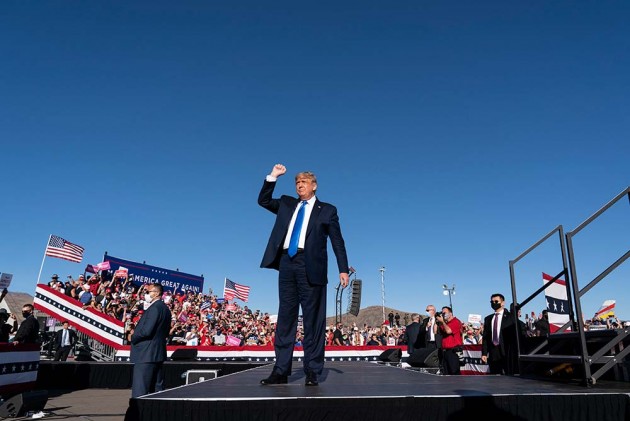 Many pundits believe that Democratic contender Joe Biden’s double-figure lead in the polls is sufficient to crown him as the 46th President of the United States of America. Yet, the world holds its breath while Americans stock up on popcorn and soda for election day, now shaping up to be an event which will overshadow the Super Bowl.

Even President Donald Trump’s detractors will admit that until last year, his second term was a foregone conclusion. As a strategist in former President Bill Clinton’s campaign had famously exclaimed, “it’s the economy stupid,” and it was grudgingly accepted that the economy was doing rather well. Then someone in China ate a bat, making the pandemic an election plank. Can Mr Trump be blamed for the severity with which the pandemic hit America’s shores?

The retort that Mr Biden had opposed the decision to stop travel from China quite early on makes for good copy but misses the point that many angry Americans on social media blame their President for “murdering” Americans who perished. The charge is that frivolous uttering misled the people and precautions such as the wearing of masks was not made mandatory. The Democrats have fuelled the outrage by claiming that he did not pay heed to the science. Public memory is short and few remember the Director of the National Institute of Allergy and Infectious Diseases Dr Anthony Stephen Fauci’s interview on “60 minutes overtime” where he said that “right now people should not be walking around wearing masks”.

People look to expend their anger following disasters by looking for scapegoats. Presidents are in the hot seat and should expect to be criticised. Many world leaders are accused of misgovernance for failure to contain the outbreak. Surely, the American electorate realises that even today there is no consensus within the scientific community about the optimal method to contain a runaway virus. Mr Trump’s utterings were of course inexact and full of bravado. Mr Biden’s on the other hand are gloomy and downright morose. In a widely televised debate, Mr Biden spoke of a ‘dark winter’ and predicted that 200,000 more Americans will die before the end of the year. This is extremely unlikely in 10 weeks and perhaps he confused his projection with the number of people who had already succumbed to the virus.

While Mr Biden came to the debate armed with some punchy one-liners and was able to deliver them without faltering, his sense of foreboding was very apparent not just in his words but also his demeanour. What is most admirable about the American national character is an unfailing and contagious optimism and Mr Biden may have squandered away his best shot at the presidency. Voters would much rather gravitate towards the unbounded positivity of Mr Trump pointing out that one cannot shut down the country. This refrain would reverberate across the globe with ordinary folk who have exhausted all limits of forbearance and now yearn for some semblance of normality. The question here is not about who is correct, the answer to which is still hotly debated by the experts. It’s about what sells with the electorate. Mr Biden’s accusations also allowed his opponent to cannily turn the issue around back to the economy and voters are unlikely to blame him for their failing fortunes, attributing the downturn to a vile bug which interrupted an era of prosperity. If this works Mr Trump will be the first president in living memory to be elected at the time of an economic downturn.

There are however more serious charges against Mr Trump. The allegation of racism has its foundation in his effort to build his wall. However, the Democrats have themselves had occasion to roundly condemn the evils of unbridled illegal immigration and are on camera doing so. A large section of the media refuses to expose this hypocrisy. Relying on this fringe benefit would be a cardinal error if it turns out that the American people have a collective memory of previous campaigns.

To be sure, Mr Trump is not a likeable person. But nor is he a buffoon, as many would have us believe. One wonders if his unique conversational style is deliberate given its undoubted effectiveness in communicating with the masses. If his advisers bite their tongue each time he strays from the script, they would do well to remember that the subtle message being understood is that this man here is not a politician. It is not surprising that in an era where the disaffected all over the globe are sceptical of the glib talking political class, this simplicity is sufficient to win the day.

Mr Trump is also likely to benefit from the fact that he quite simply did what he promised to do at the very outset. Not a thinker in the Obama mould, he has demonstrated that common sense and instinct matter a great deal more. Especially when the elite have not learnt the lessons of 2016 and continue to sneer at him and his base.

When President Obama was celebrating at the park in Chicago, Democrats may be forgiven for mistaking the historic election as a sign that the demographics with increased numbers of Latino and Black voters were so overwhelmingly different from the previous century, that the days of the GOP were numbered. While the euphoria of those heady days can be understood, the intellectual snobbery and holier than thou attitude proved to be their undoing in 2016. Unfortunately, the same divisiveness has now transcended to a point where it is impossible to hold a conversation with anyone who will vote blue this November. From being labelled country bumpkins it has now come to a point where a Trump voter is branded a racist, a fascist or a Nazi. Name-calling, abuse and the inevitable violence which follows has a lot to do with social media where expression is limited to 40 - character sentences which few can appreciate in the right context.

For this reason, however, there are many thinking Americans who would not care to admit that they will vote Trump but will do so nevertheless. If this phenomenon enables Donald to Trump ‘Bye-byeden’ it will continue to baffle and bring great disrepute to the science of psephology.

Percival Billimoria is a chartered accountant and leading corporate commercial counsel. He has written extensively on economics, geopolitics and current affairs in addition to matters of law and litigation. (Views expressed are personal.)