COVID-19 Forced World To Adopt Masks, Why Then Niqaab Is Problematic?

How will security agencies distinguish between a spiritual choice and health-related concern? Isn’t democracy once again becoming context specific where actions must square with circumstances and the values of choice, liberty and equality becoming relative once again? writes Dr Farhat Bano. 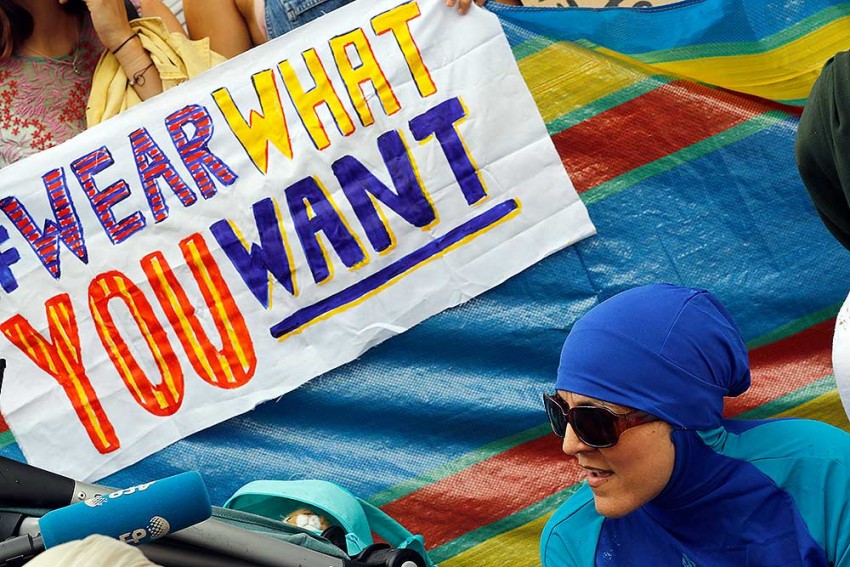 In this file photo, an activist protests outside the French Embassy in London during a protest against the French clampdown on Muslim women wearing burkinis. (AP photo)
Dr Farhat Bano May 23, 2020 00:00 IST COVID-19 Forced World To Adopt Masks, Why Then Niqaab Is Problematic? 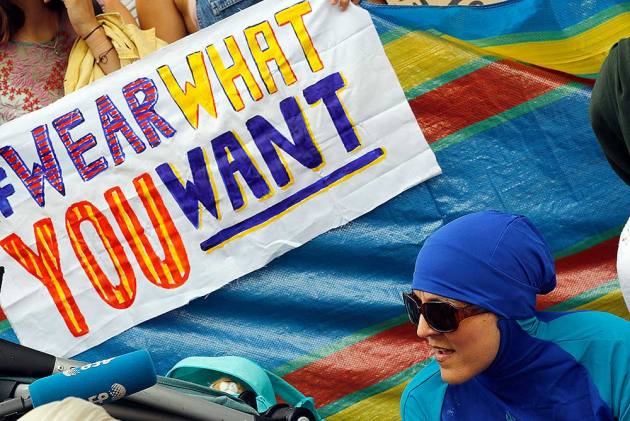 The coronavirus pandemic has upended our lives in unthinkable ways. Governments worldwide, whether democratic or authoritarian, are taking unprecedented decisions to manage the pandemic raising concerns of government overreach, abuse, inaction and even denial. The notion of an active and engaged citizenry is getting weakened as the survival instinct has mutated the civic ethos so as to empower governments to choose for us what we would have never chosen for ourselves under normal circumstances. Is this process new or have democracies presumed choices earlier as well?

History tells us that choices are relative. They have never been made available universally and exhaustively to all. Race, gender, language, ethnicity based differentiations among others have been a global trend. Yet, democracy has retained its fascination as the principle on which political life is organized or ought to be organized. What lies at the heart of this appeal is the freedom to make choices.

The laissez faire position based on individual dignity is premised on the conviction that: “to be able to choose is a good that is independent of the wisdom of what is chosen.” Freedom of choice is not simply a political nicety; it is liberating and empowering; it enhances self-esteem enabling us to make choices that sculpt our identities thus giving us a certain sense of control over our lives, whether real or imaginary. How do democracies determine what choices are worth pursuing and what are worth denying? Can governments deny a choice under ordinary circumstances on grounds that such choice is offensive, alien, chauvinistic, a security threat, rather a slur on choice itself and then endorse or enforce something fairly similar under circumstances such as the present coronavirus pandemic?

An example would perhaps, simplify matters. If we think through the act of face-covering, there are by and large two ways of screening one’s face. One is with face masks now being worn by men and women worldwide to combat infection against COVID-19 and the other is the Islamic face veil or the ‘niqaab’ worn by Muslim women for religious reasons. After discouraging citizens from wearing masks during the initial stages of the pandemic, even countries with anti-face covering legislations are encouraging face-cover in public places. Face masks, although considered alien to western culture, have been made mandatory in the Czech Republic, Austria, Slovakia, Bosnia-Herzegovina; are being recommended in France, Italy, UK and the United States with citizens being encouraged to use either face masks, or scarves or bandanas in public places. In countries like China, Hong Kong, South Korea and Japan masks have had a ubiquitous presence.

Unlike masks, which are slowly gaining acceptability to contain contagion, the face veil has had a rather chequered history. Seen as oppressive and discriminatory, the face veil has been an object of contempt, pity and bewilderment. Muslim women in the West, despite being ridiculed, fined, arrested and subjected to job losses for the act of covering their faces continue to do the same with educated and accomplished women taking such decisions even in the wake of controversial legislations imposing penalties for non-compliance.

States such as Denmark, Bulgaria, Belgium and France among others have imposed bans on the face veil with several local bans elsewhere in the world. Despite prohibitions, what explains this choice? For most women the decision to veil is the outcome of a spiritual journey that has deepened their relationship with God sometimes even in the wake of family opposition. For some it is the most preferable act to please God and therefore a source of spiritual comfort. For still others, the face veil safeguards them from unwanted, malicious and unscrupulous gaze. Seen from these perspectives the choice is spiritually stimulating, psychologically empowering, socially liberating, enhancing mobility and the quality of their lives.

Why is this choice upsetting for democracies? Muslim women who don the face veil toss at least three perplexing questions for liberal/western democracies to answer. Firstly, doesn’t everyone enjoy an equal right to make choices? If ‘who is choosing’ and ‘what options can be chosen are predetermined’ clearly it would be impossible to universalize the freedom of choice as being equally available to all. Secondly, what happens when choices conflict with the values of the otherwise tolerant liberal democratic framework? It lays bare an irony. Despite the ostensibly pluralistic nature of western societies that claim to be the harbingers of multiculturalism and religious pluralism certain choices are clearly ‘objectionable practices’.

Confronted with the ‘absurdity’ of such choices the explanations typically range from forceful compliance due to coercion exerted by husbands, families or the community with the idea of the individual making rational choices for oneself so central and so inviolable a virtue of democratic societies fading into oblivion. Not that there is always no truth in such an assertion but the belief in the sheer irrationality of such a choice lends no credence to the wisdom of those opting for it. Thirdly, how are the religious and cultural needs of the minorities being addressed by the state in terms of enhancing not just their enjoyment of democracy but also the quality of their lives? For the west however, such choice is cryptic, culturally inappropriate, slows down social integration and raises security concerns apart from problems of face recognition and difficulties in engaging socially without facial expressions.

In an unexpected turn of events, people across the West today are covering their faces in the niqaab like fashion. Face masks are now everywhere covering as much as the face veil would cover. What options are we exercising now and what new choices are being thrust upon us? There is very little room for choice as citizens must comply with the advisories issued by their governments and health officials. People everywhere are going about their jobs without being asked to remove it for identification or for security purposes. We are told the practice is likely to outlast the pandemic as a protection against the likelihood of future diseases. Just as a deadly virus has made masks a global norm against the likelihood of infection, why can’t the niqaab be respected as a matter of choice for some for spiritual reasons?

Face masks have already become a part of ‘coronavirus couture’ and the fashion industry is seeing a boom in face mask production. While there is a compelling business case for this trend it simultaneously brings to the fore some questions that must be answered. How will this create complications for the law enforcement agencies in the West that could until now discriminate between religious and non-religious face covering and take penal action accordingly?

How will security agencies distinguish between a spiritual choice and health related concern? Isn’t democracy once again becoming context specific where actions must square with circumstances and the values of choice, liberty and equality becoming relative once again? As governments grapple with the pandemic we hope the measures they undertake to restrain our choices are temporary and proportionate to the requirements of the crisis. On the positive side, for those women who wish to cover their faces the crisis has produced unintended consequences. The limitations of gender, religion and other bigotries will probably no longer decide how the game of choice will be played in the immediate future in this regard - for how long - only time can tell.