When the dust settles down, the image that will come back to haunt us is that of a soaring young bird, having its wings clipped in mid-flight, hurtling down on terra firma with a thud, bloodied, bruised and battered. 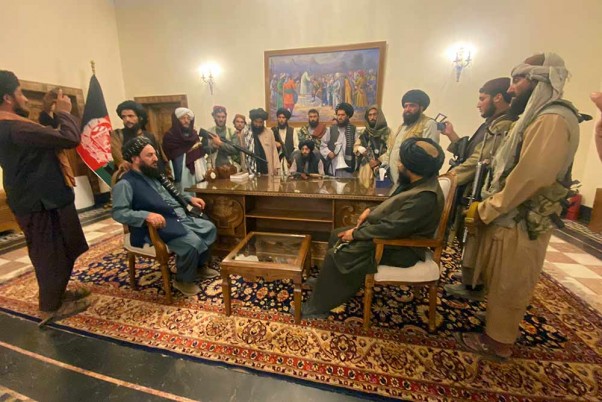 As a development worker, I spent five years of my life in Afghanistan between 2007 and 2013. In more ways than one, by the time that I landed in Kabul one balmy afternoon of July 2007, the international security and aid efforts were moving forward in top gear. Hamid Karzai seemed like a man in control of the destiny of his fledgling nation-state. The Taliban were a distant dream for ordinary civilians, at least in the urban centers, eager to get on with their lives.

Or, not quite. Reality jolted me as I stepped out of my office complex on my very first day at work to attend a lecture at one of the city’s famous watering holes for the international media. Fezeh, a female Afghan colleague of the Hazara ethnic stock offered, out of courtesy, to escort me to the venue, a short 500-metre-or-so walk from my UN compound.

Even though she had her chador in place and chose to walk a couple of paces ahead of me and not by my side, the piercing glares of the bystanders and the brazen catcalls by the waiting cabbies at the street signal made her feel like the most immoral woman alive. This, for the simple act of walking on the street with a foreigner. I was filled with rage and advised Fezeh that we better trace back our steps and return to the office. Her response was a suppressed smile as she muttered in hushed tones that she was quite used to this kind of behaviour but it would not deter her to walk with whoever she wished to and claim her right to public places.

'People Are Terrified In Kabul'

Are Afghan Women At Risk Of Sexual Slavery?

Notwithstanding her bravado, hardly could I believe that just a few metres outside the haloed United Nations headquarters in the national capital, for a modern Afghan woman, the mere act of walking the street in the company of a man other than her spouse would be seen as a gross defiance of the unwritten moral code put in place by a bunch of grisly insurgents who had ruled the country with an iron hand from 1996 to 2001, with their extreme and misguided interpretations of Islam reserved for women. In an anti-climactic turn of events, the speed of which took even the oh-so-mighty Americans off-guard,  a full two decades hence, the grisly insurgents have seized power in Kabul from a weak, distant, disconnected and fractious regime that capitulated without a fight.

The insurgents, though, had been for all intents and purposes beaten back into the bush. But the memories of their extreme depredations lingered in every Afghan woman's mind and defined the way she turned out in the public place. The horrendous ravages of the Taliban era had robbed women of all sense of self-worth and pushed them deep into a pitiless existence, the last dregs of their self-confidence stolen. Retribution was swift, public and brutal, so women had learned to internalize fear and perverse acquiescence into conformism was accepted as a fait accompli.

Even inside the seemingly egalitarian UN precincts, ministries of the federal government and offices of national and international broadcast networks, it was commonplace to see women invariably covered in head-scarves and burqas and, in keeping with the mores of public behaviour, speaking in lower-than-normal tones.

A state-building effort designed to stabilize the conflict-wracked country yielded many quick wins. By the end of the first decade of the new millennium, an impressive 3.5 million girl children were enrolled in schools, a gargantuan effort in a country where just a decade earlier girl-child marriage was rampant and women were made to feel like chattel. Afghan observers would often go into overdrive, citing the progress made in advancing women’s rights to basic education as an initiative pregnant with the possibility of laying the foundations of modern Afghan society. As more and more women entered the workforce, the demographic dividend was on full display.

In the years that followed, I was witness to under-grad schools and universities filling out with girls in Kabul. None was happier at the new spring in the step of women than Nancy Dupree, the Founder-Director of the Afghanistan Center for Kabul University, the irrepressible American women’s rights activist, indefatigable documentalist and writer of the most delightful Afghan travelogues, who passed away in September 2017 in her ever-beloved Kabul.

As Nancy stood witness to the depths of human misery, impoverishment and helplessness, but also to countless stories of resilience, triumph and hope, against all odds, she never tired of exhorting young girls to help themselves to opportunities thrown open by the rule of law in modern Afghanistan that the international community was helping rebuild. In a long interview she gave me and Rosanita Serrano for The Afghanistan Times, she left us in no doubt that the well-meaning efforts of the international aid community focusing on women’s upliftment would come to a nought if we failed to pay attention to the generation of young boys who had wasted away their best years of youth fighting the war for their country.  Now that the rogues are back in power, I wonder what she would have made of these developments? I shudder and squirm to think about the road ahead.

(An aside: It is not so well known that Ms Dupree, who, along with iconic women like Carla Grissman and others, spent the better part of her life protecting Afghanistan’s culture and cultural artefacts,  had most of her childhood in India, then under the British Raj. Her parents were working in Kerala, where her father was an advisor to the Maharaja of Travancore. Her mother, a Broadway actress, was drawn to Indian art and theatrical dance forms and was the first foreigner to complete a PhD on Kathakali in the British Raj by a foreign scholar.)

My first United Nations assignment outside India took me to Afghanistan, where I spent just under five years, listening to myriad broken men and women who had lived to tell the stories of their shattered and scattered lives, and their constant search for a place safe enough to bring up their children. The stories that got to more than others, I pursued to the very end, tailing my characters like a shadow through all their journeys, observing and processing changes in their lives as perpetual journeymen with each setback and triumph. Some of those stories are part of “Humans on the Run -- Of Exiles and Asylum”, my book of stories of global human displacement from 12 conflict-scarred countries.

In Afghanistan, over a five-year horizon, I travelled across a dozen provinces and made connections with youth and children, many of them returnees making sense of their existence with parents inevitably contemplating the future of their children with a gnawing sense of concern and hopelessness as the conflict raged on. The familiar scenario of radicalized armed thugs, either from shadowy para-state armed groups or from militant organizations like the Taliban, got repeated in different places. As the conflict raged in small towns and districts, people got displaced, moved back and moved all over again. Through all of the internal and external displacement, the one goal that parents did not lose sight of was the basic education of their children.

When the dust settles down and the world comes to terms with a deep sense of outrage at how swift the Taliban incursions have been and how even the mighty American administration has been blindsided by the rapid turn of events in Kabul leading to the most counter-intuitive and apocalyptic end -- for now, at least -- off the decades-long war in the country, the image that will come back to haunt us all is that of a soaring young bird, having its wings clipped in mid-flight, hurtling down on terra firma with a thud, bloodied, bruised and battered.

For thousands of Afghan girls who not only taught themselves to read or write but went beyond to become the educated, self-confident woman of today, not afraid to excel and express herself on the football field, the newsroom or the portals of international development, their dreams are now in the hands of the men in big, burly turbans and menacing intent. The girl-child in Afghanistan is back to square one. Cry, my beloved Afghanistan! It is difficult to be hopeful in the present moment.

(The writer is an aid worker, UN communications expert and author of “Humans on the Run - Of Exiles and Asylum”. Views expressed in this article are personal and may not necessarily reflect the views of Outlook Magazine.)