PM Modi said in his May 30 ‘Mann ki Baat’: Over these years, the country has followed the mantra of ‘Sabka Saath, Sabka Vikas, Sabka Vishwas' 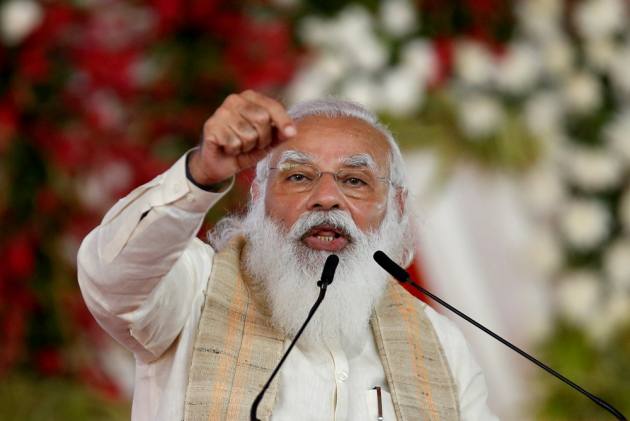 Prime Minister Narendra Modi’s ‘Mann ki Baat’ on May 30, 2021, marking the completion of seven years of the Modi Government at the Centre, was interesting and relevant for several reasons.

PM Modi said in his May 30 ‘Mann ki Baat’: Over these years, the country has followed the mantra of ‘Sabka Saath, Sabka Vikas, Sabka Vishwas’.

Deconstructing the ‘Mann ki Baat 2.0’ series, PM Modi’s radio address in his second term provides some interesting insights into the Modi government’s worldview and priorities to win ‘Sabka Vishwas’. This is also the period that saw the deadly, unpredictable Covid-19 pandemic challenging and testing India, like few events have done in living memory.

As India Battles The Virus, Let Us Not Weaken National Resolve

It’s the national icons, cultural and social symbols, values and folklores invoked in the radio talk, over the last two years, that provide us one of many reasons why the Prime Minister’s trust quotient and credibility remain extremely high, even if the government’s handling of the pandemic has been questioned and criticised.

Among the national, cultural symbols and festivals that the PM has talked about in his radio address, over the past two years, include Dussehra, Durga Puja, Eid, Ramzan, Ganeshotsav, Sharad Poornima, Diwali, Bhai Dooj, Guru Nanak Dev anniversary, Holi, Christmas, Gudi Padwa, Mahavir Jayanti, and Chhath.

The birth anniversary of Lord Basaveswara and the first Tirthankara Lord Rishabhdev have been mentioned.

Geeta Jayanti has been discussed; sons of Guru Gobind Singh, Sahibzade Zorawar Singh, and Fateh Singh have been remembered.

The event of Sister Mariam Thresia being declared a saint by His Holiness Pope Francis, too, has found a mention.

Over the last two years, in ‘Mann ki Baat’, the PM has talked about, among other national icons, Adi Shankaracharya, Swami Vivekananda, Gandhi, Patel, Birsa Munda, Bhagat Singh, Ambedkar, and Netaji Subhash Chandra Bose. He has also invoked Sri Aurobindo. Nanaji Deshmukh has come in for a special mention.

Talking about Sri Aurobindo, the PM remarked in one of the episodes: “He also used to say that Swadeshi means that we give priority to the things made by our Indian workers and artisans. It is not that Sri Aurobindo ever opposed learning anything from abroad. Wherever there is anything new, we should learn from there and then support and encourage what can be good for our country – and that is the spirit of the Vocal for Local mantra in the Aatmanirbhar Bharat campaign. Especially what Sri Aurobindo opined about adopting Swadeshi should be read by every citizen today”.

The list of national icons, symbols, folklores mentioned here is only indicative, and by no means complete, but it surely helps one get the big picture – about the PM's and the government’s priorities, themes, and vision.

There have been rich tributes to India’s linguistic richness and diversity, too in the ‘Mann ki Baat’ 2.0 series. In one of the episodes, the PM talked about cricket commentary being done in Sanskrit, and a cricket tournament held among Sanskrit colleges in Varanasi. There’s also a reference to more than 15 guides in Kevadiya, Gujarat, who guide people in fluent Sanskrit.

New Zealand MP Gaurav Sharma taking the oath of office in Sanskrit, too, came in for a special mention.

In the May 30 episode of ‘Mann ki Baat’, PM Modi said; “Together, we have experienced many moments of national pride in these years. When we witness that now India gives a befitting reply to those who conspire against us, then our confidence soars. When India does not compromise on these issues of national security, when the strength of our armed forces increases, we feel that yes, we are on the right path.”

Armed forces’ importance in the national scheme of things has increased manifold in the present regime. In one of the earlier episodes, the PM said something which, perhaps, explains the bigger philosophy.

In one of the earlier episodes, PM Modi said: “Going beyond Gandhiji’s thought, Atal Ji had said that the Kargil war has given us another mantra. And the mantra was – before taking any important decision, we should think whether our step, our endeavor is befitting to the honour of the soldier who laid down his life in those remote mountains. Let us understand it. The time has come to accept it.”

In other episodes, there are references to the commencement of ‘Amrit Mahotsav’ of the 75 years of Independence. ‘National Science Day’ has been discussed.

It’s not that there are no challenges in present-day India. The Covid-19 pandemic, inarguably, remains the biggest threat to humanity and the biggest challenge to governance. Also, governments and political parties should always be questioned and held accountable for their actions.

Having said that, the ‘Mann ki Baat’ series is an extremely important account of contemporary India’s evolution and its quest for a better, stronger, and more prosperous future. Mapping the series provides interesting and valuable insights into the Modi government’s quest to win ‘Sabka Vishwas’.

A book had been released on the series completing 50 episodes (“Mann ki Baat – A Social Revolution on Radio”). Maybe, at an opportune time, the series should be converted into an enlarged book as well as a documentary – a ready reckoner of sorts, explaining the Narendra Modi government’s philosophy, governance challenges, and priorities, and vision for India -- for the benefit of students, public, researchers, and historians. Many would call the quest ‘New India, Infinite Possibilities, and some would even call it ‘Discovery of New India’!

(The writer, a JNU alumnus, is a political analyst. Feedback can be sent to skjthe@gmail.com)