Definitive Guide On How to Muzzle Fanatic Followers Of The Game 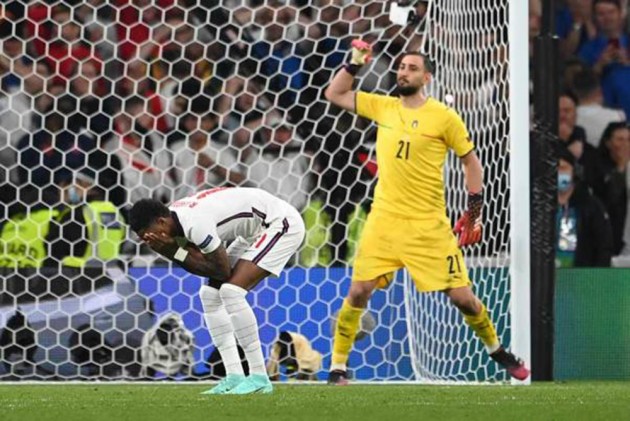 This toolkit is to be circulated among all English soccer fans for the next 55 years. The purpose is to restore Britain’s place in the world as a melting pot of multiculturism and not a country where the pot calls the kettle black. An audio/video version of this toolkit is also to be made as many it is aimed at may not know how to read.

a. From now on at Wembley’s gate, ask fans to show ‘I am not racist (spelt with a c not s)’ written 100 times in A4-size paper, double spaced, along with the ticket. Appoint a handwriting expert to verify it. Only those legible will be eligible.

b. Hold webinars before the games to sensitise fans on racism. Get Boris Johnson and Priti Patel to host them (hold webinars separately for them before, to sensitise them). While at it, can also discuss other issue like gender equality. Add a lioness to the Three Lions.

c. Have giant breath analyser equipment at railway stations and bus stops leading to the stadium. But to avoid the possibility of empty stadiums, allow only those who have guzzled a dozen cans of beer to enter. The cops can be a little lenient here but certainly not a single glug beyond two dozen.

e. Shift all soccer stadiums away from London to the country—say to Cotswolds and Guernsey—where the maximum angry fans can break is blades of grass. Plant only muscular cedars, oaks and birches around the venue which even the heaviest of them can’t uproot.

f. Since it will take a while for the trees to grow, as an immediate measure all the shops and offices around stadiums should be double-shuttered and electric-fenced. The bobbies and peelers are going to be of no help in these situations. Get the Mossad on short-commissions before big games.

g. Jam all internet around stadiums on game days so that no social media messages can be sent to ‘spread enmity among people and disrupt peace in the region’. Enact stringent laws like Unlawful Activities of Fans Act (UAFA) and National Soccer Act (NSA). India can help here with its vast experience in these fields.

h. Make watching Test cricket compulsory for all soccer fans. At the end only the chronic insomniac will make it to the stadium. Alternatively, make football games last for five days. By the time the result comes all adrenalin would have evaporated and testosterone calmed.