Geography His Biggest Enemy, Kejriwal Unlikely To Be Alternative To Modi

No matter the buzz that the AAP victory in Delhi is certain to create, it is unlikely that the diminutive Kejriwal will acquire a far larger image to pose a challenge to Modi, writes Outlook's Editor-in-Chief Ruben Banerjee 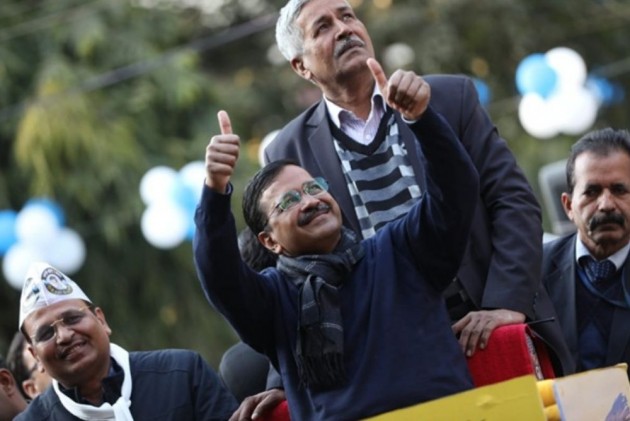 With Delhi elections done and dusted, the next big question to ask is whether Arvind Kejriwal can emerge as an alternative to Narendra Modi at the national level.

The question is certain to be discussed and debated at length in TV studios and drawing rooms of homes across the nation following Kejriwal’s creditable victory. Though the Aam Aadmi Party (AAP) has marginally slipped by surrendering a few seats to a resurgent BJP, AAP’s victory is testament to Kejriwal’s tenacity and pragmatism as a politician. And given that he is no less ambitious, could it be that he would now aim higher and pitch himself as an alternative to Modi? The prospect of such a possibility is tantalising enough to dominate media headlines for days to come.

But no matter the buzz that the AAP victory in Delhi is certain to create, it is unlikely that the diminutive Kejriwal will acquire a far larger image to pose a challenge to Modi. True, the opposition is minus a face or a leader and desperately needs a charismatic leader to infuse enthusiasm and a winning narrative among the anti-BJP ranks. Rahul Gandhi of Congress has come a cropper on that score. Others such as Mamata Banerjee of West Bengal or an Akhilesh Yadav or a Mayawati still remain regional leaders. But no matter how acutely the absence of a pan-India charismatic leader is felt in the opposition ranks, Kejriwal is unlikely to fill the vacuum. And the reasons for why an election win in Delhi will not propel Kejriwal to the national stage are many.

Does AAP Chief Arvind Kejriwal Have The X-Factor To Defend Delhi?

We Gave Pens, They Gave Guns To Children: Arvind Kejriwal

For one, geography is Kejriwal’s biggest enemy. He is primarily a Delhi phenomenon which accounts for no more than seven parliamentary seats. Even if his acolytes start discovering a great potential in him afresh following his re-election as the chief minister, such expectations are unlikely to bear fruit since Kejriwal will never have the numbers to back his claim for a national role.

What also goes against Kejriwal is the manner the AAP is structured and the cult-like personality that has come to be associated with him. If Kejriwal is to pitch himself as a national leader, AAP has to expand its footprint in other states, thereby giving it a larger kitty of Lok Sabha seats. But that is going to be easier said than done. More importantly, such an eventuality, however impossible, may end up damaging the cause of Kejriwal.

Kejriwal is Kejriwal because he is the undisputed leader of AAP. But if the party that he runs in an autocratic style is to expand to other states that are necessarily bigger than Delhi and accounts for more number of seats, its leaders in other states will in all likelihood get to overshadow Kejriwal by virtue of leading bigger states. For example, there is speculation that AAP is in talks with southern film star Kamal Haasan in Tamil Nadu. So even if for hypothetical purposes it is accepted that Haasan comes on board and leads the AAP to victory in Tamil Nadu that has 39 Lok Sabha seats, the matinee idol will instantly emerge as a far bigger politician than Kejriwal.

That would spell the end of Kejriwal and there is nothing to suggest that the astute politician he is, the Delhi chief minister suffers from a suicidal streak. Self-preservation is the prime motto of any successful politician and Kejriwal in all probability will keep his personal ambitions in check to ensure no rivals emerge within the AAP. Therefore, what is likely to happen is that Kejriwal, following this win, will become a more confident politician. He may also lend his voice occasionally to add to the opposition chorus against the BJP. But by no stretch of imagination will he become the fulcrum of opposition politics against Modi.

So, what about all the hype and buzz of Kejriwal storming the national stage? Well, they will be confined to TV studios, media headlines and in the realm of popular imagination.