Unless the police force is reformed – a promise that successive governments have not fulfilled – and its top hierarchy is insulated from political pulls and pressures, the police will always stop short of fair and firm policing. 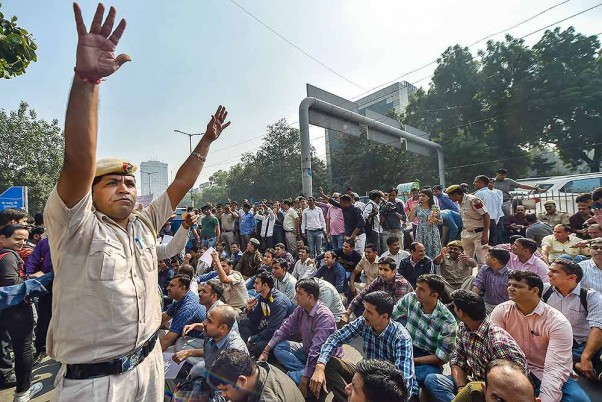 The police in Delhi are up in arms, protesting the assault on them by lawyers in and around the city’s courts, and the spectacle isn’t a pretty sight. Meant to be a disciplined force that bars them from any open show of defiance or dissent, Tuesday’s agitation wherein many policemen publicly jeered the city’s top cop as he cajoled them to disperse and return to duty, serves a reminder to all about what is wrong with policing in Delhi.

True, the lawyers are probably more in the wrong in this episode, which began when some lawyers got into a tiff with a posse of policemen at the Tis Hazari court. It soon snowballed into a major confrontation with both sides targeting each other. While videos showing lawyers beating up cops went viral, there were also evidence of policemen going berserk in response.

Tuesday’s protests, however, were ignited after a video that showed a motorbike-borne policeman being punched and slapped by a lawyer in front of the Saket court a day earlier. It reinforced common perception that many lawyers are some of the biggest violators of law. Many in fact need to be behind bars forthwith.

That unruly lawyers should be dealt with firmly is common sense.

But what is more pertinent is that no matter how wronged the policemen were, it is difficult to sympathise with them given their track record.

Well, the cops are protesting since some of them found themselves at the receiving end of unruly lawyers. But what happened when JNU student leader Kanhaiya Kumar was assaulted – not once but twice – by several lawyers while being produced in the court in police custody? Kanhaiya’s arrest came in the wake of alleged seditious slogans being raised in the JNU, and though the student leader insisted on his innocence, many – his assailants included – had already pronounced him a member of the so-called ‘Tukde Tukde gang’.

The larger point that many missed then amid the mayhem was that the Delhi Police abdicated its role and responsibility. It did precious little to protect Kanhaiya, so much so that after the student leader was assaulted the first time, the emboldened lawyers could dare to beat him up a second time despite the police being duty-bound to provide him security.

Delhi Police didn’t come to Kanhaiya’s rescue. If at all, they aided the lawyers. Stung by the nationwide outrage that the twin assaults sparked, they went through the motions of charging some lawyers and that is where it all ended. None was punished or convicted.

An argument can of course be made that it is the senior cops, out to curry favours with ruling party politicians for plum posts and perks, who are guilty of compelling the police force to be complacent. But whatever the reason, it is safe to assume that the police are reaping what they have actively helped to sow: the lawlessness of lawyers.

Now that the Tis Hazari episode has made headlines and resulted in so much of unrest within the force, the top cops will have no option but order a crackdown. And that is bad news for the lawyer seen to be assaulting the motorbike-borne policeman in that video. He will be arrested to assuage agitating cops.

But that will certainly not be the end of the story. Unless the police force is reformed – a promise that successive governments have not fulfilled – and its top hierarchy is insulated from political pulls and pressures, the police will always stop short of fair and firm policing. And some lawyers will someday again take matters into their own hands, triggering another crisis. Lowly cops will continue to bear the brunt of the follies of their superiors and the unsavoury show will go on.