India, which hosts the SCO summit on November 30, should lay out a fresh template to revitalise the Eurasian grouping. 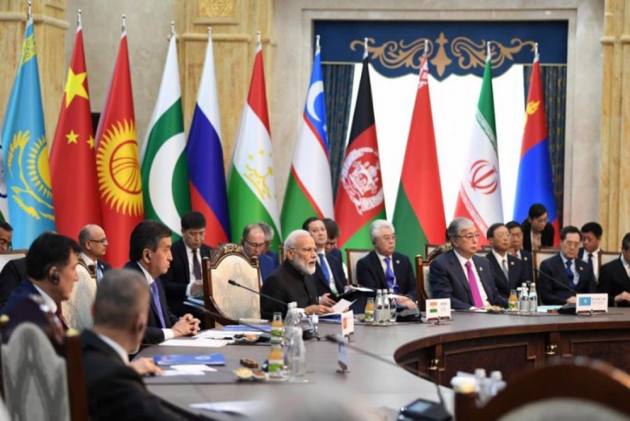 Western observers have been sceptical about the Shanghai Cooperation Organization (SCO) becoming an effective regional powerhouse. The grouping was borne out of a ‘border resolution’ mechanism in 1996. Its underlying goal was to build “mutual trust and neighbourliness” that had drawn everyone’s interest including India’s.

SCO isn’t an ‘alliance’ but it stands as one of the mightiest groupings in size (four nuclear-powered states) with a combined GDP of $19 trillion. It draws top Eurasian leaders annually to take part in the anti-Western power play. The grouping though adheres to the regional security agenda – its defence-centric structures and activities admittedly have achieved considerable successes in curbing regional terrorism.

Twenty years on, however, the grouping lacks a foreign policy convergence or a drive to spur any regional economic growth that tends to frustrate its member states. Critics suspect it is a deliberate ploy of China and Russia (the core agenda-setters) to push their own bilateral interests.But what actually lies behind the flurry of SCO’s high-profile events is the underlying intense regional affliction that existed even prior to India and Pakistan joined it in 2017. It primarily revolves around a nebulous but ill-concealed Russia-China rivalry.

For years, Moscow has effectively impeded SCO turning into a Chinese dominated economic block – and repeatedly derailed Beijing’s plans for pushing a Free Economic Zone and an SCO Development Bank. This was done to ensure that SCO doesn’t outdo Russia’s own regional integration scheme, the Eurasian Economic Union that overlaps in Central Asia. In fact, many believe that Moscow had deliberately pushed for India’s entry into the SCO to water-down China’s influence. Beijing responded to it by pushing Pakistan’s membership into the grouping.

Some observers point to China’s declining interest in SCO after India’s admission into the grouping. This aside, regional wrangling plus the SCO’s routinely adopted a grand-standing position and rhetoric against the West has driven the Central Asian countries to seek alternative ‘C5+1’ dialogue mechanism with the US and others.

In 2019, even China opted for a C5+1 format the scope of which goes beyond the economic domain to cover security and geopolitics. It even seeks to “to form a zone of security, stability, and prosperity in Central Asia”. Besides, Beijing’s priority over the years has shifted to promoting its BRI projects, that travel in the same geographical space.

Multiple internal contradictions beset SCO – India-Pak conflict being the latest addition. Further, the conflict-prone India-China ties create an acrimonious atmosphere. Regional connectivity is being pegged as a priority for SCO’s integration and growth. But, the project such as the China-Pakistan Economic Corridor (CPEC) that passes through the Pakistan-occupied-Kashmir (PoK) grossly violates India’s sovereignty, which in turn breaches the SCO’s core principle of “mutual respect of sovereignty and territorial integrity of States” that will erode its growth.

The Covid-19 pandemic has also exposed the SCO’s fragility. For example, the outbreak and lockdowns instantly caused an economic shock wave in Kyrgyzstan, plunging the country into political unrest and chaos. Mobs were quick to hound the country’s President from office amidst a dispute over rigged parliamentary election results in October. In Belarus, an observer state of SCO, a similar pandemic-induced unrest turned to challenge President Alexander Lukashenko’s election victory held in August. To add to the regional woes, the Nagorno-Karabakh conflict got sharpened amidst the pandemic, although that was mischief wrecked by Turkey to undermine Moscow’s influence in the Caucasus.

Even oil-rich Kazakhstan could potentially face a similar situation when it goes for the parliamentary elections scheduled for January. Clearly, the routinely declared over 97 percent vote results in favour of the incumbents is unlikely to go unchallenged in the post-Covid-19 scenario.

The economic vulnerabilities too have been exposed. There has been significant economic disruption causing GDP decline by 3 to 5 percent. The drop in oil prices, fall in remittances from Russia, etc. have created myriad social problems. A prolonged crisis would then be exploited by China, which is already extending its cooperation on Covid-19 under its BRI scheme rather than under the SCO rubric.

Moscow actually helped resolve the recent Kyrgyz crisis, but China emerged as the key beneficiary. New Kyrgyz leader Sadyr Japarov, who emerged from the street protest anger, was quick to announce friendship with China, as he sought immediate debt relief from Beijing. In return, he pledged to protect Chinese investments and the safety of Chinese citizens and enterprises in Kyrgyzstan.

During a week of unrest in October, large Kyrgyz crowds stormed into Chinese-owned gold mines and chased out Chinese workers. Apparently, at least six Chinese Private Security Companies (PSCs) are now operating in Central Asia to protect the BRI projects. The Kyrgyz foreign minister recently spoke to his Chinese counterpart to defer billions of dollars in debt. Beijing, in return, hopes Kyrgyzstan will synergize its national development strategies with the BRI. As for the strategic dimension, the West so far hasn’t really targeted the Eurasian body. The US administration has instead followed a continued strategy of strengthening the sovereignty and independence of Central Asian countries. However, Secretary Mike Pompeo, in his final months rolled out diplomatic measures under the C5+1 format to push back on Chinese influence and wean Central Asian states away from overly depending on Beijing and Moscow. His Central Asian counterparts, however, avoided getting into ‘undesirable political consequences’ of big power rivalry.

Much would depend on how the Biden administration will navigate its China and Russia policy. Both nations have been rather tardy in responding to Biden’s victory. At the Moscow Summit, Presidents Vladimir Putin and Xi Jinping pledged to stick to multilateralism and stay united in the post-Trump era, especially amidst the Covid-19 pandemic. Of course, the two leaders opposed the politicization of the pandemic.

While not everyone is happy with the SCO’s tardy progress, the grouping has certainly played a big role in keeping Eurasia relatively stable and free from the menace of extremism and terrorism, a serious concern given what is being witnessed in West Asia and next-door Afghanistan, and a reason why India has joined the grouping.

Yet, given the potentials of its member states emerging as strong markets the SCO could finally achieve its goal of becoming a strong community in Eurasia. When New Delhi holds the summit level meeting on November 30, it should lay out a fresh template in optimistic terms to make the SCO more meaningful and organized with economic content. The potential for India in Eurasia is limitless.

(The writer, a former Indian ambassador, is the founder of the Ladakh International Centre, and a member of the Advisory Council of Oxus Society for Central Asian Affairs.)