Dilip Kumar reinvented speech itself for the cinema. He spoke to us because he had that special quality of speaking, almost magically, from inside of us -- articulating our intimacies. 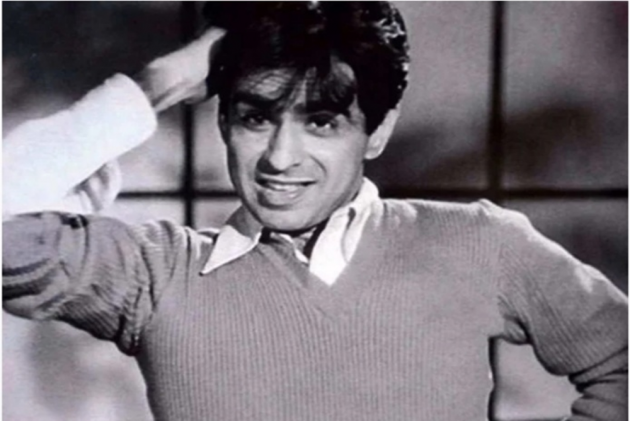 You would be inundated by Dilip Kumar obituaries by now -- those written afresh, and those already written and kept ready and waiting, like scavenging birds, for the opportune moment of his passing.

All the biographical details you wish to know, or already know and merely wish to relive in nostalgia, would be out there. So, I will spare you those, and focus on a singular aspect that made him perhaps the most seminal figure in popular cinema.

For me, he reinvented speech itself for the cinema. He had as a precursor, in terms of someone who valued naturalness in acting, only Ashok Kumar -- and Wikipedia assures us that the senior Ganguly was the one who advised him to "keep it natural".

He did that, but he also did so much more than that. He took speech away from the distant theatrical orations of the likes of Sohrab Modi -- those still approached acting from the stage, presuming an active distance from the proscenium to the audience. Dilip Kumar brought that down to ordinary human speech -- to intimate whispers, even mumbles, bringing a sense of nearness and interiority.

In a sense, that created individuals out of what was hitherto a collective audience. And yet, he gilded the prosaic realm of ordinary speech with the poetic lustre and inner pain of the stage soliloquy. That magical point where the stage is emptied, and the spotlight trains on a lone figure who becomes us. His soliloquies were your soliloquies.

The classic clash of styles came in Mughal-e-Azam, where his soft, sensitive Prince Salim faced off against the thunderous Akbar of Prithviraj Kapoor with...yes, words...but also silences, and marvellously speaking eyes.

The scene that framed this the best is his very entry. All the grandiose pageantry of the Mughal court comes to us first -- nobles, palace maids, and eunuchs running about, jewels raining down on silver trays, orchestras heralding his arrival.... All that magniloquence comes to a halt as he approaches the queen, his mother. And a hush envelops the screen in anticipation of his first words.

That his Urdu diction was a polished, literate one should surprise no one, given that he grew up in times and in a place where that was very much the lingua franca. But there's a more generative side to this. His diction has filled out our notions of a Hindi film hero's speech more than we sometimes realise.

It must be said bluntly: Amitabh Bachchan lifted his entire tone and modulation. And Shahrukh Khan after him.

I realised this as a teenager one day when the TV was playing in the other room... I rushed out thinking an Amitabh Bachchan film was on! That was Amitabh speaking! (Back in the early eighties, we were all still fans.)

I still recall the moment of shock. I ran into a grainy B&W frame, with a horse-back Dilip Kumar filling the screen, quite the young, charming beau then. Perhaps he was serenading a lady. But that's beside the point.

Syllable for syllable, the rise, and fall in tone, the enunciation, the places chosen for emphasis...there was no doubt that it was here that Amitabh found a singular model to emulate and base his speech on.

Dilip Kumar was of course many things. Those who deny the existence of caste within South Asian Islam, for instance, may find it a bit hard to digest the fact that "the first Khan" -- from the heart of Pashtoon country -- was an ardent, lifelong supporter of Pasmanda politics. As videos containing his own words show, he was quite the humanist.

There's also another lesser-known side to him, which actually segues well with his humanism. He was not only supremely au fait with the world of Urdu poetry, he held it as a formative element in his acting. And flowing from that, there's the fact of him being, actually, an excellent singer.

For proof, here's Dilip Kumar singing the most heartfelt lines, in the company of Lata Mangeshkar. The film is Musafir (1957), incidentally Hrishikesh Mukherjee's first as director.

Listening to that for the first time a few years ago, after a knowledgeable colleague passed on the video, I couldn't fathom why composers never made him sing more. To my mind, this one song beats everything that happened in film music since the eighties. Hands down.

Here, as with every other aspect of his best years, we see the real reason why Dilip Kumar spoke to us. It was as if it is we who were speaking. He had that special quality of speaking, almost magically, from inside of us. Our intimacies are articulated on our behalf, relieving our inarticulacy.

That's why I would not hesitate to ask you to leave aside all those verbose obituaries, including this one, and hearken to seven words spoken on Twitter after the news of his passing. Perhaps the most wonderfully apt tribute, worthy of the man of silences and few words, paid by a radiologist from Ranchi, Dr. Manish Kumar (@drmanishranchi)...

"He was the Mir of Indian cinema."