For Its Role In Anti-CAA Movement, Jamia Stands At A Crossroads

Jamia Millia Islamia was born in a crisis, and if during its centenary year it’s mired in another, so be it. 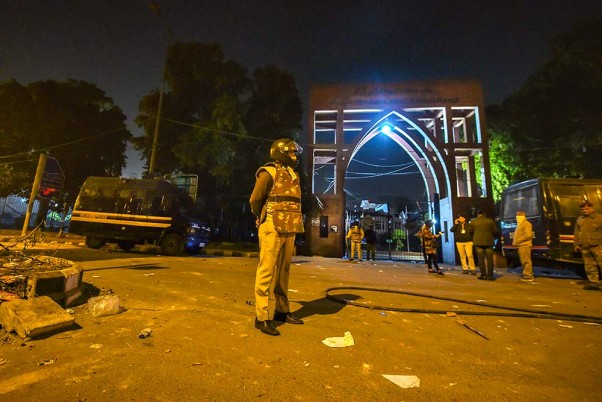 As I write this, scores of security personnel patrol the streets outside Jamia Millia Islamia, waiting to crush even a hint of protest. A pregnant research scholar, Safoora Zargar, languishes in jail for her role in anti-CAA protests. So does Meeran Haider, another research scholar. And Shifaur Rehman, president of the Jamia alumni association. They have been slapped with the draconian Unlawful Activities Prevention Act (UAPA) for a ‘crime’ they did not commit.

Throughout the protests, these people had devotedly mounted their resistance on constitutional values and the nation's secular ethos. Let there be no doubt that their arrests are part of a nefarious witch-hunt. It’s a warning that those who would organise protests against CAA, NRC and NPR, would meet the same fate. This repression is happening when the whole country is engaged in a fight against Covid-19, and the State is using it as a smokescreen to suppress dissent. In executing its evil design, the State is undermining democratic channels of voicing grievance.

The Jamia students, who were active in anti-CAA protests, live under constant fear today. They dread being the next target. It has led to a dark humour among them. “If anybody loves me, better express it now. Or UAPA might claim me before you,” goes the unsettling joke. Many students are yet to recover from the horror and trauma of police violence in December. Their dreams have been crushed by the State. A lot many parents are scared of sending their kids to Jamia. The crisis that the institution faces is enormously real.

Also Read |  Allow Us To Talk To Her Once A Day: Sister Of Arrested And Pregnant Jamia Student

Curiously and regrettably, the crisis started unfolding barely 45 days into Jamia’s centenary year – the university was founded on October 29, 1920. The legislation of new citizenship law, which transgressed the boundaries of the basic structure of the Indian constitution, on December 13 triggered strong protests from the students that continued at full steam for over three months until the pandemic happened.

While the protests were on, a few colleagues and I sat down to discuss the course of year-long centenary celebrations that had been planned. Needless to say, it is extremely sad that a year of celebration started off on such a tragic note. Naturally, there were concerns whether to continue with the celebrations or not. I put forth my submission that Jamia was born in a crisis, and if during its centenary year it’s mired in another, so be it. In that regard, it’s important to place the university in historical context.

Jamia took birth in the throes of the nationalist movement. The ethos of India’s struggle for independence from the British Raj, became touchstones of the university. Founded in 1920 at the call of Mahatma Gandhi, the groundwork for Jamia was done by Maulana Mohd Ali, AM Khwaja, Hakim Ajmal Khan, Mukhtar Ahmad Ansari and many others. In Jamia’s collective consciousness, historical episodes and anecdotes are frequently recalled to underline its historical continuity. When the university was facing a scarcity of funds in 1925, Gandhi had famously told Hakim Ajmal Khan that if need arose, he’d go around with a begging bowl to help Jamia.

The financial crunch, however, was a big concern for Jamia in its nascent years and there were apprehensions whether the university will survive or not. The support of the Muslim community was still oriented towards the older and more established Aligarh Muslim University. In addition, those with deep pockets were unwilling to fund an institution whose ways went against the colonial government.

At the time of Jamia's establishment, the Muslim community was groping in every direction and grappling with questions of country and community (A similar reckoning has been forced by the CAA in present times). The year 1920 was the time of the Non Cooperation Movement and the Khilafat Movement, and consequently, a very dynamic period in the national life of Indian Muslims – much the way it is today.

So for Jamia, an institution concerned greatly with the education of Muslims, the crisis was manifold. Nationalist Jamia, in fact, was a thoughtful and courageous choice that the Muslim community made back then. There were other institutions, too, established in the same year but Jamia, and the idea of Jamia, have clearly outlived and outperformed them. The moral ballast provided by Jamia’s sacrifices in the national struggle tided it over the crisis.

The present day crisis is also wrought with very vigorously contested themes, and the sustained protests against CAA created a lot of space for engagement. Slogan shouting gradually gave way to scholarly lectures and discussions. The protestors invoked the Constitution of India to demonstrate that the makers of Indian Constitution had ensured the State shall not discriminate, and that no law shall ever be framed which would favour one over the other.

The Preamble to the Constitution became the bedrock of the protest and ‘We the People of India’ emerged as the clarion call among the protestors. As a natural corollary and symbol of national unity, the tricolour too became an integral part of the mobilization against the CAA. The leading figures of India’s independence struggle were invoked with frequency. And so was Ambedkar, as an icon for social justice. The writing on the wall became very clear that the anti-CAA protest had succeeded in building bridges across social groups.

Besides questions of citizenship, identity and constitutional values, there was a whole vault of student issues. When the assault on Jamia happened, it wasn’t seen in isolation as a large number of campuses erupted against the police brutality. In Delhi, JNU, IIT-D and Delhi University came out on streets in protest against the attack. In far off campuses such as Jadavpur University, Kolkata; Madras University, Chennai; BHU, Varanasi; AMU, Aligarh; TISS, Mumbai and several other university campuses, students expressed solidarity with Jamia. It was a turning point.

Anti-CAA protests acquired pan-Indian character overnight without any coordinated campaign. Students’ response in solidarity with Jamia was reflective of pent up anger against the system since the time of their protest at FTII, Pune. Rohit Vemula’s death at HCU, Hyderabad was another flash point.

Many of these questions might have acquired a milder form during the pandemic but they remain very much alive. The State’s vengeful crackdown on students tells us that the crisis has only deepened over the months. But with its legacy of struggle, Jamia will take the crisis in its stride.

(Rizwan Qaiser is a professor of modern Indian history at Jamia Millia Islamia. He has authored a biography of Maulana Azad. Views expressed are personal.)