For Sri Lanka, India Is 'Relation', But China And Pakistan Continue To Be Friends

India’s security concerns would not stand in the way of Sri Lanka’s economic and commercial relations with China and Pakistan. 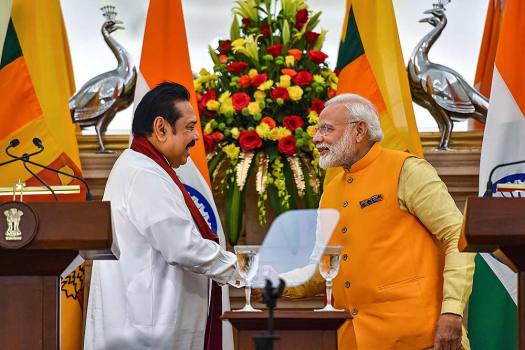 The India-China military stand-off, understandably, has overshadowed other developments on the foreign front especially in the South Asian region. In these fraught times, while its northern neighbours, particularly Pakistan and Nepal, are a source of cold comfort to India when dealing with China, the signals from the south are somewhat different.

Thus, Sri Lanka’s “India First” strategic security policy, articulated by the new Foreign Secretary, Admiral Jayanath Colombage (retired) in the last week of August, came as a timely reiteration at a critical juncture. Admiral Colombage is the first from the armed forces to become the island republic’s top diplomat.

There is nothing new in what Colombage has said, as it is a reiteration of Sri Lanka’s long-standing policy. This was the position of Mahinda Rajapaksa when he was President from 2005 to 2015 and was explicitly communicated to Prime Minister Narendra Modi by his brother President Gotabaya Rajapaksa soon after his election last year. Earlier this year, after returning to office, this time as Prime Minister, Mahinda too made the point on his visit to New Delhi when he met Modi.

Therefore, much as the reiteration by Colombage is expected to be reassuring, it also raises the question of whether it was intended to draw attention to the riders that came with it.

The rider, spelled out in plain words, by both Gotabaya and Colombage, was that Colombo’s deference to India’s security concerns would not stand in the way of Sri Lanka’s economic and commercial relations with China and Pakistan. As has been stated, again more than once, while Sri Lanka considers India a “relation”, China and Pakistan are friends.

Colombage’s articulation might well be a sophisticated response to India’s hints in the aftermath of the Galwan Valley clash with China that Sri Lanka—meaning the Rajapaksa brothers—should shed their pro-China image. Should that be the case, then Sri Lanka’s answer as given by Colombage, and the Rajapaksa brothers, is that Colombo is not ready to oblige on this score.

In successive interviews to the island’s media outlets, Colombage was emphatic that Sri Lanka “cannot afford to be a strategic security threat to India”. At the same time, he was equally emphatic that economic development is the goal of his foreign policy and this requires him to recognise the “clear shift” in the world economic order. In one of his recent interviews, Colombage said: “China is the second largest economy…and India the sixth…We are between two economic giants. How we benefit from both is diplomacy. That is why the President mentioned that as far as strategic security is concerned, Sri Lanka will always have an India First approach…As far as economic development is concerned, we cannot depend on one country. We are open to anyone. We know China is one country willing to invest. We have to benefit from it. We have to balance,” he added.

Such a position also implies that Sri Lanka would not be drawn into New Delhi’s Indo-Pacific play, driven by Washington’s containment strategy against China. Colombage also echoed the statements of his President and Prime Minister to the effect that “Sri Lanka is an independent, sovereign nation”, meaning it would not be intimidated by Big Brother, no matter what compulsions are brought to bear on the relationship.

Also Read: Gotabaya Rajapaksa's Many Challenges Include Balancing Ties With India And China

The draft 20th Amendment Bill has revived efforts among sections of the minority Tamil leaders to make India take an interest in the matter. As New Delhi weighs the pros and cons of responding to the Bill for its perceived impact on Tamil aspirations, it should be borne in mind that Sri Lanka may brook no intervention. That has been made clear to India on more than one occasion and explicitly to Prime Minister Modi during Mahinda’s visit earlier this year.

Mahinda Rajapaksa’s categorical assertion that India’s scrapping of Article 370 was the country’s internal affair and “we will not get involved in the internal matters of India” was a message that Colombo wants this to be reciprocated in principle and practice.

Modi, however, refused to take the hint and urged Colombo to meet the “expectations of the Tamil people for equality, justice, peace and respect.” Rajapaksa did not hesitate to rule out any solution to the Tamil problem that would be unacceptable to Sri Lanka’s majority community.

At the present juncture, any misreading of the messages from Colombo could cause avoidable headaches to New Delhi.