How A Tagore Fan Became Founder Of Chinese Communist Party

As China celebrates the Communist Party’s 100th anniversary, we look back at the party’s founder, who introduced Indian literary icon Rabindranath Tagore to Chinese readers 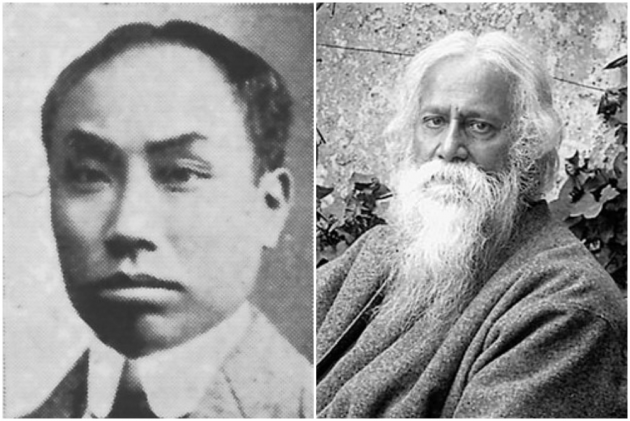 Chen Duxiu has often been credited as the founder of the Communist Party of China (CPC), but very few know that the man – one of the most prominent early 20th century scholars of China – also played a huge role in introducing and promoting Rabindranath Tagore’s works to his home country before vehemently discrediting the Indian bard.

According to a paper called “A century of vibrations between Tagore and China (1913-2012),” written by Professor Tan Chung and Professor Wei Liming, Rabindranath Tagore was introduced to the Chinese as early as October 1913 – a month before his name was announced as the first-ever Asian Nobel laureate – when Qian Zhixiu, editor of Dongfang zazhi (Eastern Miscellany), one of China’s earliest modern journals, wrote, “Tagore is an Indian poet famous for prophecy’, in his article ‘Tai’e’erzhi reshengguan’ (The Worldview of Tagore) along with the Indian author’s photograph.

But a couple of years later, as the Indian polymath became world-renowned after receiving the coveted Nobel medallion in Stockholm on December 10, 1913, it was Chen who introduced Tagore's writings to the Chinese readers. The then Professor of Chinese literature at the prestigious Peking University translated four poems (Nos. 1, 2, 25, and 35) from Tagore’s magnum opus of Gitanjali (Song Offerings) in Chinese for the second issue of his then-newly launched leftist journal, Qingnian zazhi (Youth Journal), in October 1915. Naming the anthology ‘Zan’ge’ (Hymns) but being confused about the Indian laureate’s award category, Chen penned a eulogy: “Tagore is a modern poet of India. He advocated carrying forward the Eastern spiritual culture. He was awarded the ‘Nobel Peace Prize’ and is famous all over Europe. Indian youths revered him as a prophet. His poetry is rich in religious and philosophical ideals.”

The Anqing-born scholar mistakenly addressed the Nobel literature laureate as the peace awardee and had to rechristen his vernacular Chinese magazine after the second volume as Xinqingnian (New Youth) soon after being sued by the editors of another journal also named Qingnian zazhi for stealing their title. But there was no shortage of his zeal in promoting the Indian author in his mother tongue. A few months later, two more poems from Tagore’s The Crescent Moon were published by the popular periodical under the titles ‘Tongqing’ (Sympathy) and ‘Haibin’ (‘On the seashore’). But this time, the translator was not Chen. Instead, Liu Bannong, then a young editor of the journal who later became a professor at Peking University and famous writer, translated the two poems for Xinqingnian, which also had a French title of La Jeunesse.

Significantly, apart from presenting Tagore to his motherland, Japan-educated Chen was a key figure in starting the New Culture Movement in 1915 with his radical journal and made it the first forum for Chinese intellectuals to introduce new ideas and theories. He also played the role of a gamechanger by leading a drastic change in society that fuelled the defining May Fourth movement in 1919 that, arguably laying the foundation for the formation of the CPC two years later.

Chen’s Xinqingnian, after debunking Confucianism with Western science and democracy in its initial issues in the first couple of years, shifted its focus towards Marxism, eventually consolidating an intellectual base for the party, which Chen co-founded in 1921.

Formation of the Communist Party of China

In April 1917, Chen’s Xinqingnian published an article written by a young Mao Zedong, and that paved the way for the future founder of the People’s Republic of China’s baptism with Communism. The write-up established Mao’s first contact with Chen before the former started to study Marxism. Then, in 1918, while working as a librarian’s assistant at Peking University, Mao got a chance to audit some lectures by Chen Duxiu, alongside Hu Shih and Qian Xuantong, and also came under the influence of Professor Li Dazhao, the head of the university library, who later co-founded the CPC with Chen.

In July 1921, Mao travelled to Shanghai as a representative of the Marxist study groups in Hunan to participate in the historic First National Congress of the CPC where the 13 participating delegates founded the CPC as per the suggestion of the then representative of the Communist International or Comintern, Grigori Voitinsky and his colleague Hendricus Maring. Chen was chosen the first-ever General Secretary of the party after its birth despite his absence along with his fellow CPC co-founder Li at the Congress at 106 Wangshi Road in Shanghai’s French Concession and the subsequent continuation of the critical meeting on a tourist boat on the South Lake in Jiaxing, Zhejiang Province. At the same time, Xinqingnian became a formal mouthpiece of the CPC, with Chen as the chief editor after the party's foundation. Notably, Mao, still waiting to come of age, took the minutes of the pathbreaking meeting. Meanwhile, in the same year, Tagore, while devising a new learning system in India, established his dream university of Visva-Bharati in Santiniketan.

Taking on Tagore in China

The Indian poet laureate’s first visit to China came after three years in 1924. At that time,  one of the first translators of his works, Chen, had become one of the most prominent and the fiercest critics of Tagore’s landmark visit. But the CPC co-founder stopped short of questioning Tagore’s writing prowess due to his earlier admiration for Tagore’s literary achievement even though he expressed his reservations about inviting ‘Dr. Tagore,’ - as he addressed him in his articles and leaflets slamming the Indian literary legend - to his country. The Tagore-translator-turned-Chinese Communist leader became the most fervent detractor of the Indian poet as he continued his tirade against Tagore through several no-holds-barred articles in publications like Zhongguo qingnian (Chinese Youths), Xiangdao zhoubao (The Weekly Guide), and Yusi (Verbal Threads) during the latter’s China sojourn, apart from distributing handouts snubbing Tagore and creating commotions by sending his men to the venues where the poet delivered lectures.

Incidentally, according to another article written by eminent Chinese historian Prof Tan Chung, “Xiangdao zhoubao", the first mouthpiece of the Chinese Communist Party followed Tagore’s itinerary in China with short snippets written by Chen Duxiu and an unidentified pseudonym, “Shi’an,” in 10 one-paragraph comments (a total of about 900 words) from 23 April to 10 July 1924.” Incidentally, it was Chen who started the influential Xiangdao zhoubao as a successor to his earlier periodic publication of Xinqingnian. The exponent of the May Fourth Movement dubbed Tagore’s peace movement as advice to the Chinese to be humble to the imperialists and came down heavily on his spiritualism and endorsement of oriental culture.

But as luck would have had it, another Indian, who was also a critic of Tagore’s views, arrived at the scene that saw the gradual fall of Chen from grace. Comintern delegate and Soviet leader Joseph Stalin’s emissary to China, Manabendra Nath Roy or MN Roy, who had grown up under the name of Narendranath Bhattacharya, had brought the Comintern-sponsored controversial resolution that the CPC must lead the agrarian revolution swarming across a deeply divided China while rethinking its future relations with the Left Kuomintang and its government at Hankow during the fateful Fifth Congress of the CPC in the city, currently a part of modern-day Wuhan, in May 1927. Although the then general secretary Chen and the Soviet Politburo appointed CPC advisor Mikhail Borodin readily opposed Roy’s radical move, the resolution was overwhelmingly endorsed by a big majority of the Congress delegates, predominately the ones from the countryside. Meanwhile, a cunning Roy’s capricious act of leaking the Comintern order to the CPC and then chairman of the Left Kuomintang Government at Hankow, Wang Jingwei, resulted in the expulsion of the Communists from the Left Kuomintang-led regime in Wuhan and the government’s fall. The terrible turn of events of the spring of 1927 also marked the end of the Chen era at the helm of the CPC as an extraordinary meeting of the Central Committee of the Party deposed him from the exalted position of general secretary. Subsequently, in 1929, the year Tagore made two short visits to China, the purge of Chen was complete as the CPC expelled its co-founder for toeing the Leon Trotsky line against Stalin’s policies for the then Comintern-guided CPC toward the Chinese revolution.