Future Of News: What May Save India's Flailing Print Journalism In Digital Age

This business model, termed the advertiser-revenue model of news, has been the dominant operational model for newspapers over the last few decades. However, as readers shift from the newspaper to the webpage, the sustainability of this model has begun crumbling. 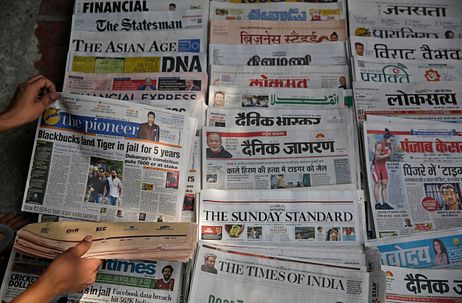 By any reasonable measure, the print news industry lies in dire straits. The financial shock of the Covid-19 crisis has brought this trend to a precarious tipping point. The last few months have seen several reports of media houses laying off their journalists, cutting their salaries and benefits and even shutting down entire editions of their papers. This is not a crisis limited to India, as is evidenced by similar decisions being made in newsrooms across the world. It is also not a crisis that has an end in sight. Spectators of the industry unanimously express a pessimistic outlook about the future of print news, and it is easy to see why. In a world of mobile applications and web pages, the physical newspaper looks like a relic of a different age.

Print news is a predictable victim of the technological transformation of our society. The internet brings down the costs of producing and distributing information. The penetration of smartphones and 4G internet across the country signals that the days of the newspaper stand might be over. Instant access to an unlimited selection of news content for free may have seemed like a pipe dream twenty years ago, but the promise of the Internet points to this utopia. Yet, all is not well online. With traditional revenue streams from print advertising slowing down, news organisations have naturally moved to monetise their digital editions, with paywalls slowly becoming the norm for online versions of newspapers as well. A world of pay-walled news, where only those who can afford hefty monthly subscriptions are able to read credible accounts of current events seems like a cheap parody of the promise of the Internet.

The answer to optimising the news environment clearly seems more complex than just to ‘move everything online’. There is a deep malaise at play in the print news industry, and its business models have found themselves flailing in a world which is increasingly more comfortable with tossing the newspaper aside. To break down this issue, we must ask a few questions: what are the causes and consequences of the current state of the print news industry? Why is it necessary to save this industry? What would a solution potentially look like?

The sands of time: Print news in a digital age

In order to understand how the print news industry arrived at its current predicament, it is important to understand the dynamics that undergird their enterprise. Most newspapers cost around Rs. 15-20 to produce, while they are sold for prices around Rs. 1.5-4 (The Indian Media Business, Vanita Kohli-Khandekar, 2013). The shortfall is made up by advertising revenue that a newspaper generates. Effectively, advertising revenue cross-subsidises the production costs of a newspaper. This business model, termed the advertiser-revenue model of news, has been the dominant operational model for newspapers over the last few decades. However, as readers shift from the newspaper to the webpage, the sustainability of this model has begun crumbling.

Advertisers tend to follow eyeballs. The rise of digital news, with its ability to target demographics of readers in a personalised manner on social media platforms, offers a more attractive proposition to most advertisers who have shifted the focus of their advertising budgets towards digital advertising. This is a trend that was set in motion a few years ago and has only gotten stronger. For example, in the period from 2014 to 2015, print media advertising grew at a rate of 8%, while digital advertising grew by 38% (The Future: Now Streaming, FICCI-KPMG Report, 2016). Projections about the near future predict that digital advertising is expected to grow at a rate of around 27% in the coming few years, while print advertising is projected to grow at a relatively meagre 3% (Digital Advertising in India 2020, Dentsu Aegis Network, 2020). When these projections are combined with the slowing growth in the readership of print news, it presents a bleak outlook for the commercial future of print news.

At the same time, news organisations have struggled to benefit from the shift towards digital advertising. The process of digital advertising relies heavily on ‘advertising platforms’ – who operate as middlemen between advertisers and publishers of news. Over the previous decade, these advertising platforms have grown in power, with reports indicating that the market is primarily dominated by two players – Google and Facebook. The presence of these platforms as ‘unavoidable trading partners’ for most news publishers has diminished their ability to negotiate for better returns from the platforms. While Google has recently made some concessions in respect of revenue-sharing with news publishers in some countries, the advertiser-revenue model of news has not proved that it can succeed for newspapers in the digital age. The rising trend of pay-walls and subscription models is perhaps the strongest evidence of the failure of the digital advertiser-revenue model.

There are larger consequences which follow from the failing business model of traditional print news. Print newsrooms have long been hailed as the primary sites for credible journalism, who employ the largest number of professional journalists. The diminishing influence of the print news industry also points to the diminishing influence of professional editors in deciding the news ‘diet’ of their readers. When the primary mode in which the news reaches its audience is through their social media news feeds, the algorithm starts acting as the editor. Unlike the front page, which is curated by professionally trained and accountable journalists, the top stories are decided by the algorithm’s ranking of the news which receive the most hits. Consequently, there is a propensity to prioritise issues which drive engagement on social media, which may often come at the cost of more sombre, public-interest reporting.

It is, of course, attractive to say that the future is inevitable, and print will eventually be a victim of the vicissitudes of time. This perspective, however, misconstrues the emphasis of the present moment. The question is not so much of holding on to the past and preserving the status of incumbents, but of ensuring that credible journalism can transition into the future in a sustainable manner. It is in ensuring this transition that the law has a role to play.

Many would be quick to point out that this seems like a business problem, and perhaps not a ‘legal’ one. They would be ignorant of the law’s commitment to ensure a vibrant environment for the press. Several constitutional cases in India have recognised that part of the Government’s constitutional mandate is to ensure sustainable journalism. This is not limited merely to preserving the right of newspapers to say ‘what’ they want to say, but also of ensuring that they ‘can’ say what they want to. The constitutional mandate, on a close reading of these judgments, is not limited to preserving the editorial freedom of the press, but also to ensure that the business of the press is not so unsustainable that it reduces the volume of circulation of newspapers, the number of newspapers in the market and competition amongst newspapers. A harsh business environment for the press directly undermines a reader’s right to be informed. In this context, the law does not only respond to the market but can also be used to shape market conditions to achieve beneficial social ends – which includes the preservation of credible journalism. This constitutional mandate must be pressed into action in order to ensure that credible journalism can survive in the face of an overwhelming digital transformation.

The winds of change: Towards legal reform

There are various ways in which legal reform can help structure these market conditions to achieve the greatest public interest. Vidhi Centre for Legal Policy’s report on the “The Future of News in India” examines avenues of such reform and proposes the way forward to sustain credible print journalism in India. The report develops a roadmap of legal reform based on an analysis of the constitutional values that should be advanced in the development of press laws.

Examining the need to orient the environment of digital news to the public good, the report highlights the potentially dominant position of online advertising platforms and argues that this issue falls squarely within the remit of the Competition Commission of India. Further, the Report argues that comprehensive regulations about the online distribution of news can ensure that user’s news feeds feature credible sources of news, and that readers are able to tell apart misinformation and credible news.

Significantly, the role of the Department of Audio-Visual Promotion (DAVP), a department under the Ministry of Information and Broadcasting which is responsible for channelling government advertisements to newspapers, assumes great importance considering the fall in commercial advertising. The DAVP appears to be suffering from a serious number of operational inefficiencies and has a long history of bureaucratic control, questionable allocation practices and ineffective transparency mechanisms. The report highlights the need for institutional reform of the DAVP to equitably channel state support to the print news industry. These, and other similar areas of reform as outlined in the report, must be a priority for the Government to ensure sustainable journalism.

Last year, a draft bill called the Registration of Press and Periodicals Bill, 2019, was circulated by the Government, with the stated objective of reforming press regulation in India. Any policy reform considered to sustain news for the public good must be consultative and inclusive. Thus, it is imperative that this reform be carried out through open and consultative processes, which involve journalists, the news industry and civil society in an effort to save news from falling victim to the sands of time.