How Akbar And Jehangir Celebrated Christmas 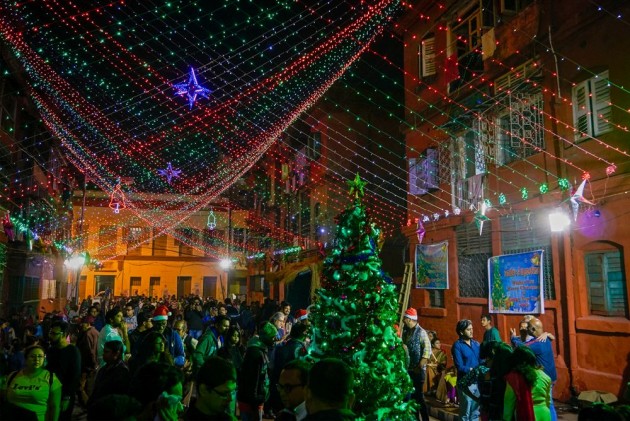 Will it surprise the present-day gate-crashing generation jam-packing hotels in Delhi and elsewhere on X’mas Eve that the Mughals, too, celebrated Christmas with great gusto, right from the time of Akbar up to that of Bahadur Shah Zafar, except for the reign of Aurangzeb and some puppet kings?

The Nativity play originated in medieval Europe but in North India it dates back to the time of Akbar the Great, who invited the Jesuit fathers to his court at Agra. The Agra of Mughal times was the most magnificent city in the East. Europeans who visited the place were struck by the glamour of its streets, the richness of its merchandise and the beauty of its palaces that strung the river Jamuna like a necklace, observed the late author Thomas Smith.

“It was a cosmopolis with Italian jewellers, Portuguese and Dutch ship-owners, French travellers, traders and artisans from Central Asia and Iran and scholars from the Middle East visited Agra,” he wrote. With such an influx of foreigners, Christmas was a grand affair in those days.

The Franciscan Annals record that “the joy of the congregation radiated all over the city.” The bazaars put on their festive appearance with colourful arches and banners and flags of several countries fluttered in the cold December air. “Bugles blared, clarionets played, trumpets were sounded, crackers fired and church bells rang”, the Annals say.

Akbar gave permission to the Jesuits to build a magnificent church in the city – tower and all, and with bells so heavy that when one of them fell down during the reign of his son, Jehangir, it could not be carried by one elephant alone to the city Kotwali. The bell broke on the occasion of the baptism of Jehangir’s nephews, when the sacristan is said to have “gone mad with joy” and to have pulled and tugged at the rope of the bell until it fell down with a great crash. Luckily, no one was injured and the sacristan did not lose his job.

Both Akbar and Jehangir celebrated the festival and partook of the traditional dinner at the Agra Fort. “On Christmas morning, Akbar used to come to the Church with his nobles to see the representation of the cave in which Christ was born and the mountain on which the good shepherds kept watch,” the Annals read.

In the evening, the ladies of the harem and the younger princes visited the church at Lahore and presented beeswax candles. Since then Akbar came there every Christmas day and was conducted to the church at Agra “like a bishop” to the chiming of bells and singing of hymns.

“The Europeans, who intrigued against each other at the court and fought on the high seas, forgot their jealousies and participated in the festival as one body. It was to them that Agra and perhaps North India owe the first Nativity play. On Christmas night they usually enacted the drama of Christ’s birth with little boys and girls dressed as angels.”

During the reigns of Akbar and Jehangir, the play became better organised and the imperial forces had to be called to maintain order lest the uninvited public broke up the performance. Rehearsals were generally held in the area of the bazaar now known as Phulatti, where the British had their headquarters.

“From 1632 onwards, the play was discontinued because Shah Jahan, who fell out with the Portuguese, demolished the church at Agra after the sacking of Hooghly port and forbade public worship by the Christians. There were hundreds of Portuguese prisoners at Agra, who had been brought all the way from Bengal. But in 1640, the relations between the Emperor and the Portuguese began to improve and they were again allowed to build a church at Agra.”

The church still exists, but the Nativity play was not staged until the reign of Mohammad Shah Rangila who patronised the Bourbons and the Dutch resident in Agra and Delhi since the time of Akbar. But the Bourbons left Delhi after some perceived insult and settled down in Bhopal.

After that Shah Alam, Akbar Shah Saini and Bahadur Shah Zafar celebrated X’mas with the English officials of the East India Company (at which Maratha nobleman Hindu Rao played Father Christmas) but the Nativity play was not held until the late 1940s when the Italian Capuchin fathers patronised it for some time.

In 1958, the first Indian Archbishop of Agra, the Rev. Dr. Dominic Arthaide, revived it. Those absent were the great Mughals, though spiritually their presence is still felt, for Agra and its church owe a lot to them. This Christmas is no exception, and when the church bells ring out at night, one can be sure that the ghost of the “mad sacristan” of Jehangir’s time is active again.

However, the new order of Diocesan priests in Agra and Delhi, which celebrates Christmas with great enthusiasm, has somehow not felt the need for continuing the Nativity play tradition. And that’s a pity!

(R.V. Smith is a historian of Delhi. Views expressed are personal)