How I Will Miss The Merry Kanwariyas On Delhi’s Streets

What a spectacle it used to be, those big men, or even mousy men swaggering to be hunks, their saffron robes flowing about them, their unkempt hair tied with Om-printed bandanas, with chillums in their palms, with a vow that they would bathe only in the Ganges. 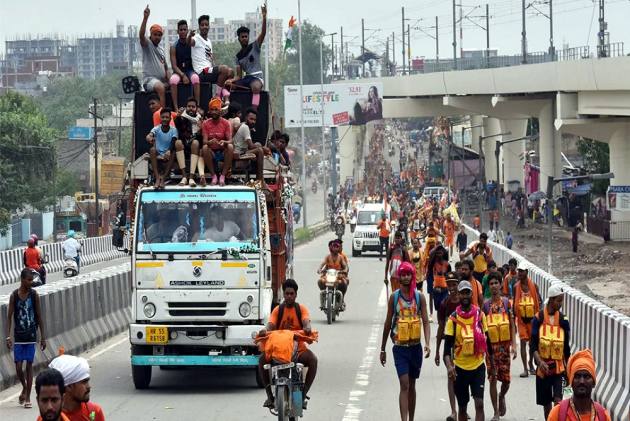 The courts are so boring! They have stolen a big slice of excitement from our lives for which we would wait anxiously at this time of the year. They have gone and cancelled the kanwaria yatra again for something as tiny and insignificant as a virus! Doesn’t the law know how indestructible these men are, how they are ajar-amar like the atma, mounted majestically on their motor bikes, horns blaring, brakes screeching, vrooming through the city--mostly against the traffic--at all hours of the day and night? No traffic light or police barricade could daunt them, no speed limit or pedestrian crossing could slow them.

What a spectacle it used to be, those big men, or even mousy men swaggering to be hunks, their saffron robes flowing about them, their unkempt hair tied with Om-printed bandanas, with chillums in their palms, the whiff of somras all around, a salute to the jatadhari, with a vow that they would bathe only in the Ganges. What cheer they would bring to this dead city with their war cries and screams, brandishing swords and trishuls, dancing the tandav with no care in the world, or any care for anybody.

But they were always men, never, ever would there be a single woman devotee. (Though I suspect in the villages these youths would leave behind there must be a collective sigh of relief to see their backs for at least a month).

Their religious fervour would be so infectious. Mata bhajans set to the tune of ‘Hai, hai mirchi; Uff, uff, mirchi’ would wake up dreary DDA colonies and make the babus and bahenjis jive to their beat. Their trailblazing trucks, with angry Hanuman and muscular Ram stickers, garlanded with plastic marigold, men hanging on to every inch of the vehicles, the bonnet, chassis, windshield, mudguards, rearview mirrors, with deep devotion and bhakti on their minds. So as not to come in the way of their meditation, many citizens of Delhi would stop getting out of their homes these few weeks. Because if anyone ever got caught in the middle of a string of them only divine intervention got them home safely. Or if anyone happened to be out on the highway, it was better to wait by the side and let the convoy of kanwarias pass, if they didn’t want to attain untimely moksha.

These few days used to be the only time Delhi had any nightlife. You could step out at 3 am and there would be this carnival atmosphere outside, the kanwaria’s brightly lit camps, loudspeakers at full throttle, cooking, cleaning, eating, with thousands of soiled thermocol plates and plastic cups strewn around like oversized flower petals. The weather would be on their side too, squalls and thunderstorms would carry their fragrance far, the leftover food, empty water bottles and gutka wrappers flowing on the streets. The remains of their camps with overturned poles and torn tents would keep their memory alive for months. In contrast, how deathly dull the streets of Delhi are now. No music, no dance, no party.

I hope the courts won’t be as cussed when it’s time for the next Shab-e-Barat, another occasion when the city comes alive with marauding Mad Maxes on bikes, wearing altogether different colours and get-up, but with same religious fervour and ferocity.