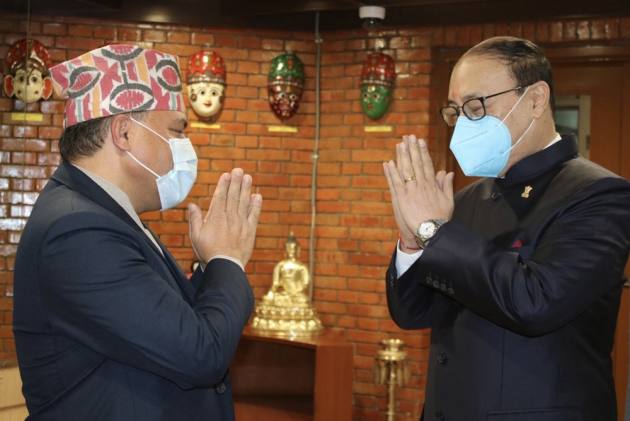 Foreign Secretary Harsh Vardhan Shringla wrapped up his two-day visit to Nepal on a positive note Friday,  as both neighbours appear to leave behind this summer’s  simmering  acrimony triggered by what is now being  dubbed as the "cartographic war."

Considering that the claim to Kalapani, which India regards as its own came around the same time as the Chinese transgressions in Ladakh, the Indian army chief in a rare outburst said that Nepal had been put up to do this by a third country, in an obvious reference to China. This was widely seen as an affront to Nepal.  Chinese defence minister Wei Fenghe arrives in Kathmandu on Sunday.

It is well known that at the time the new political map of Nepal was ordered to be printed by Prime Minister KP. Sharma Oli, he was fighting his challengers within the party with his back to the wall. Once the battle was won and his position secure, Oli decided to send out an olive branch to India. Oli called Prime Minister Narendra Modi to greet him on India’s independence day on August 15. The Indian leader said he would soon send an emissary to Nepal. The thaw had begun.

While sending out greetings on Vijaya Dashami, a major Hindu festival celebrated through the length and breadth of Nepal, Oli used the old map, which did not include Kalapani-Lupulekh-Limpiyadhura, which is in India’s Pithoragarh district. Perhaps that was Oli’s way to send a message to India. However, his opponents in Nepal were not amused with the PM’s whimsical use of the map.

New Delhi picked up the signals from Oli and knew he was in the mood to rework ties. Two other visits preceded the foreign secretary’s trip.  Samant Goel,  the chief of the Research and Analysis Wing, India’s spy agency, made a very public visit to Nepal, landing in a private plane and meeting with Prime Minister Oli. Local reports saying the meeting was a one-on-one naturally generated some controversy in Nepal.

This was followed by the army chief General Manoj Mukund Naravane’s trip to Kathmandu in early November,  where he was bestowed with the designation of the commander of the Nepali army. This is a tradition both armies maintain. The Indian army chief’s visit was delayed due to the pandemic as well as uncertain political ties between the two neighbours. The two armies have excellent ties, with many Gurkha soldiers serving the Indian armed forces. In fact, the ex-army Gurkhas receive the same pension and medical facilities granted to their Indian counterparts.

The Kalapani- Lipulekh-Limpiyadhura issue came up during foreign secretary Shringla’s talks with his counterpart as well as with senior political figures like foreign minister Pradeep Gyawali. Details are not known but it is certain that the border issue will be taken up and a solution found.

India has climbed down from its former high-handed attitude when Delhi had steadfastly refused a meeting of the foreign secretaries to discuss the border issue. Kathmandu had asked several times with no response from New Delhi. Shringla also called on President Bidha Devi Bhandari and Prime Minister KP Sharma Oli.

With China making major inroads into Nepal,  New Delhi has smelt the coffee and realised that unless it reworked ties, Nepal would get into a tighter embrace with China. Nepal is very clear about one thing. As a small nation sandwiched between Asian giants India and China, it wants to have good relations with both.  Any pragmatic leadership would try to take the best each nation has to offer for its national interest. The sooner New Delhi realises this the better.