The new map of Nepal will also be a cause of concern for India. Because in this new map, even if it is small, a crack will be found in Uttarakhand region. 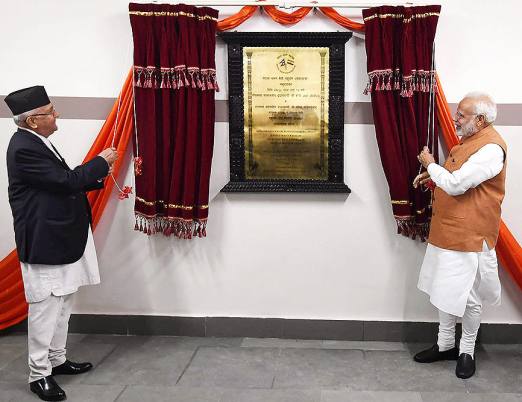 A new map is going to replace the old map of Nepal. The new map claims that the 335 sq km area of Kalapani, Lipulekh and Limpiyadhura is located in Nepal, but the area is still in India. This region has been appearing on the Indian map for ages. The bill on this issue has been passed in the lower house of the Nepal Parliament. It is evident that the matter is gradually getting out of India’s reach. Once the national emblem of Nepal is placed on this new map, there will be no way to correct it.

Also Read:Â Why India Feels Cornered Than Never Before By A Hostile Neighbourhood

Nepal has never raised the demand for Kalapani, Lipulekh and Limpiyadhura so strongly. Historically, India’s claim to these areas has been predominant. In 1815, the King of Nepal signed the ‘Treaty of Sugauli’ with the East India Company, which was ratified in 1816. According to this treaty, Nepal got the right to the east Bank of Mahakali river and India got the right to the west bank. This position has remained unchanged for a long time. The beginning of the argument centres on the identification of the source of the Mahakali river in the Nepali interpretation. Nepal’s explanation is that the region which India considers to be the source of the Mahakali river is not the actual source of the Mahakali river at all. So, the location of Kalapani, Lipulekh and Limpiyadhura is not in Pithoragarh of India but in Dharchula district of Nepal.

It is difficult for India to accede to Nepal’s claim, as it is stated in several documents apart from the Sugauli Agreement that the real owner of the region is India. During China’s invasion of Tibet in the 1950s, India set up 17-18 military posts on the Chinese border with Nepal’s permission. In 1969, at the behest of king Mahendra of Nepal, Prime Minister Kirti Nidhi Bista asked Indian Prime Minister Indira Gandhi to remove these Army posts. Kalapani was not among the list of Army posts that Nepal gave to India at that time. Now, the question is why Kalapani was not in this list? Nepal’s explanation for this question is that King Mahendra was aware of India’s security concerns, so at India’s request, he allowed the Indian Army to maintain an Army post at Kalapani. Incidentally, Kalapani is the entrance to the Lipulekh pass.

Is this interpretation of Nepal acceptable at all? China did not pay attention to this area in 1969. Also, the cultural revolution in China was at its peak at that time. It was not clear why Indira Gandhi would request Raja Mahendra to let India’s army post stay at Kalapani. And there is no historical document of Nepal’s claim. The baselessness of Nepal’s claim proves that India had set up an Army post in Kalapani as per the previous treaty. There was no question of seeking permission from the King separately.

Why is Nepal suddenly so eager to occupy this region? The reason for this is to be found in the incompetence of India’s foreign policy and China’s incitement against India. Khadga Prasad Sharma Oli, known for his staunch anti-Indian stance, became the Prime Minister of Nepal after the two Communist parties merged at the initiative of China. Maoist leaders, Prachanda and Madhav Kumar gradually became his challengers. Oli was rapidly losing popularity among the people of Nepal due to administrative failure. Although Oli was in post, the people were repeatedly demanding a change of Prime Minister. During this turmoil, India released a new map of Jammu and Kashmir in November 2019. The inclusion of Kalapani in this map gives Oli a new impetus to oppose India.

On May 8, Indian Defence Minister Rajnath Singh inaugurated the Mansarovar Link Road, in which Oli got another weapon to criticise India. In 2005, India decided to build a 80 km long road to ease the difficult and inaccessible road to Mansarovar. The cost was estimated as Rs 80 crore. The road, which was supposed to be completed in 2013, was inaugurated in May 2020. By then, the cost had gone up to Rs 440 crore. After the inauguration, Oli raised his voice against India. He adopted well-known anti-India tactics to handle mass protest in his own country. He stated: “Those who are coming from India through illegal channels are spreading the virus in the country...Indian virus looks more lethal than Chinese and Italian now.”

Immediately after his statement, a new map of Nepal was released. Leaving Prachanda and Madhav behind by cunning political tactics, Oli will be relieved for a while now.

What should India do now in this situation? Experts think that India has to proceed very carefully this time. It would be foolish for India to take the kind of action it took at the time of the Madheshi problem. In other words, India should not take any decision like a blockade. But, India has to be adamant in its demand for Kalapani, as the historical documents are in India’s favour. Moreover, Nepal has not closed the door for talks yet. Nepal has formed a nine-member expert team whose job is to present evidence in support of Nepal’s claim. India has no choice but to resolve the issue politically and diplomatically without hurting the Nepali national sentiment. In the last six years, Indian Prime Minister Narendra Modi may have brought the world leadership closer, but India’s distance from its neighbours is widening. The further India moves away from its neighbours, the close China becomes to them. Nepal is the biggest example of this. India’s proximity with its closest and most trusted neighbour Bangladesh, is also waning. At present, it is necessary for the Indian leadership to think openly about this issue.

It is important to remember that Oli has followed the path shown by Modi. Oli played the nationalist card in this case, which Modi played during the surgical strikes on Pakistan. With this single weapon, Oli silenced the opposition, charmed the masses and blunted the “big brotherly” arrogance of India. India has no choice but to remain flexible at the moment. As much as this move has brought Oli’s success as a politician, it has also exposed India’s diplomatic failure.

Nepal created a Kashmir-like situation for India with the Kalapani region. Kashmir is fragmented on India’s map to Pakistan and China. The new map of Nepal will also be a cause of concern for India. Because in this new map, even if it is small, a crack will be found in Uttarakhand region. The issue is being handled very carefully by Indian leadership but it is still difficult to heal this would.

(Author is an M.Phil Scholar of International Relations at Jadavpur University, Kolkata. Views expressed are personal.)

Pestered Over Breastfeeding, Mother ‘Kills’ Her Baby In Chhattisgarh