The fixation for a male child transcends socio-economic status, religion, education and gender. 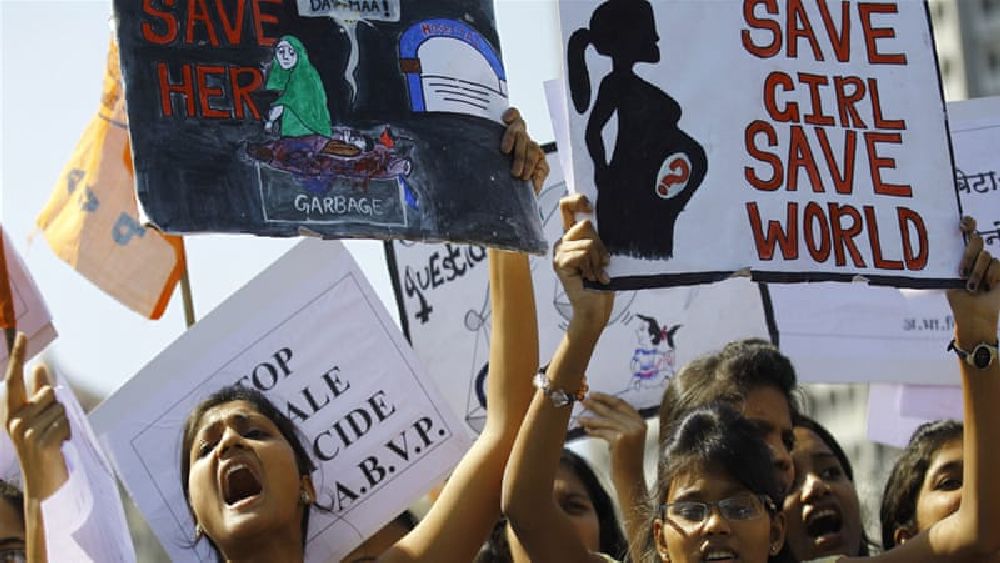 I was so busy helping the screaming 19-year-old Primi (her first pregnancy) that I completely neglected the 34-year-old Gravida (8 times pregnant) at the far end of the ward. Amidst shouts of “mukku Amma” (Push, lady, (in Tamil)), by the accompanying nurse, a beautiful healthy boy baby emerged among fanfare in the waiting room where her family rejoiced. The near- emaciated, anaemic Gravida raised her hand and to my horror, I could see the baby’s head emerging. She didn’t wince at all, accustomed to the ritual of childbirth. The beautiful girl child came out, and the mother turned away. I held her daughter to her and said, “Look, she’s perfect”. To my surprise, she had tears in her eyes and said “It’s not positive, it’s negative”; code: positive- male, negative- female. She reluctantly held her 8th daughter as she uttered a series of prayers asking God why this had happened again.

In the waiting room, her burly scowling husband was accompanied by a pretty, young girl, who looked like she was six months into her first pregnancy. She held his hand and reassured him that she would definitely bear his first male child. He looked at her and said unkindly, “you had better”.

In a third bed, an “unbooked” (one who never had any previous hospital visits during her pregnancy) mother from a distant village was given the horrible news that her baby was stillborn with anencephaly – an underdeveloped brain and incomplete skull. The young mother held on to her baby crying and kissing him, over and over again.

I shook off the stressful morning to rush to the Outpatient Gynaecology and Obstetrics department to help the Senior Doctor with the sea of patient charts that needed attention.

I read out the name of the chart in front of me into the speaker “R. Venda; come to room No. 3, please”. This was the south Indian tradition of putting her husband (Ramesh’s) initial first, followed by her name. Venda. The unwanted.

She was a beautiful young lady with sparkling bright eyes who had studied till the 9th grade. She was a good student and chatted happily. Her mother had lost her two older daughters in miscarriages. When her younger brother was finally born, the family invested all their resources into his education.

Her vitals were stable, as was her ultrasound. I casually asked Ramesh what he felt about having a boy or a girl. “As long as the baby is healthy, we don’t mind doctor,” he said kindly, “10 fingers and 10 toes work for us”. Venda added, “I will give my baby a good name if it’s a girl. I don’t want her to grow up a ‘Venda’,” she said with a tinge of sadness in her eyes. The couple recounted that they didn’t pay a single rupee in dowry as Ramesh and his family were against it. She was allowed to have her sewing business and was good at her trade.

A phone call reminded me of the short celebration honouring the women doctors in the conference room. We were given a rose each and a card expressing the hospital’s gratitude in the role we played every day. The guest of honour at this event was an eminent faculty of a nearby college, who invoked the feminist in us, all charging us with a fiery speech on how far we had come in a man’s world.

I thanked her for her speech at the coffee break and while we chatted, she asked me the procedure for getting an OPD appointment. “I’m three months pregnant,” she said. As we chatted, her husband came over with four young daughters. “I’m sure that you loved her speech! We certainly did!” I gushed.

“I got us an appointment,” said the scholar to her husband, who was also a professor in the same college. Was that a disinterested look that I saw? Or was he just tired, I wondered. The girls were wonderful and quite happy to meet a young medical intern, yours truly. One of them aspired to be a doctor, the other, a teacher, while the younger two were uncertain.

As they waved goodbye, I asked them to stay in touch and asked their names, as they shouted out-

The unwanted girl child is India’s greatest shame. The fixation for a male child transcends socio-economic status, religion, education and gender. A girl is dispensable in the world’s largest democracy. She is a product of misconception that has filtered through homes, places of worship, schools, the media, government buildings and her workplace. She is a target in utero. Illegal sex determination may ensure that female infanticide ensues. The genocide of a girl child places India fourth globally in skewed sex ratios: 1000 male to 943 female Indian babies. This ratio may be further biased due to underreporting. The Pre-conception and Pre-Natal Diagnostic techniques (Prohibition of sex selection) Act of 1994, amended in 2003, faces challenges where in vitro fertilisation (IVF) encompasses pre-implantation screening.

A girl child is more likely to go missing, suffer sexual or domestic abuse, or drop out from school compared to a male child. The girl causes great financial distress to the family at the time of her marriage as the dowry system still prevails in all classes of society in India. A male child performs the last rites at a Hindu funeral, ensuring that his parents obtain salvation.

The Indian woman is blamed for her inability to produce a male child when scientifically, the y chromosome of a man determines the sex of a child. Many women are subjected to multiple pregnancies until she gives birth to a male child, perpetuating a series of health-related issues to both the mother and the child. Postpartum depression, anaemia, complications related to repetitive pregnancies and abortions are medical sequelae. Pre-term infants, malnutrition, and health issues with the new-born are common.

The times are changing in states such as Meghalaya and pockets of Kerala. But, unfortunately, Indian society just doesn’t favour the girl child. Horrific data from Uttarakhand revealed that in over a three-month period in 132 villages, there was no record of a single girl child being born.

The beti bachao, beti padhao (save daughters, educate daughters) mission will fructify only when the Indian betas (sons)and betis are enlightened and receptive to embracing strong, empowered Indian women.