Infantilization Of Adult Students Ignores Their Status As Citizens

Student protesters in various universities in India challenge the idea of students as children. As children they are supposed to lack political knowledge, and will. 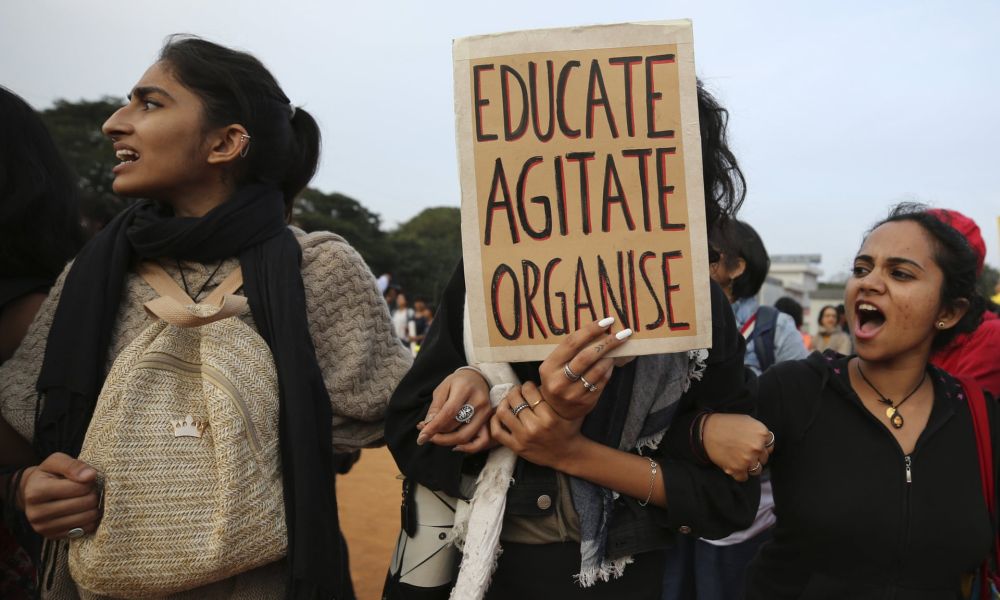 After a police raid on the ancestral home of Sharjeel Imam, a PhD student from JNU facing sedition charges, his mother Afshan Rahim said in his defence: “He is just a kid and not capable of instigating people for secession”. I find her comment interesting because she is describing her adult son as a “kid.” One way of looking at her comment is to see it as a mother’s affectionate inability to see her children as adults. But by describing her son as a child, she also follows the Indian trait of referring to students as “bachae” or children, whether they are kindergartners or university students.

This time, during my visit to Delhi and Kolkata, I noticed that detractors and supporters of the student protesters from various universities refer to them as children. For the critics, student protesters are disobedient children who abandon libraries and classrooms for unscholarly activities such as protests and questioning the government. For their supporters, students are naive children, lacking political will.

I was guilty of this peculiarly Indian habit. During my first year in the PhD program in the US, I noticed that I was the only one who referred to the undergraduate students as kids. My fellow graduate students and professors referred to them as students, or by their place in the program: freshmen, sophomores, juniors or seniors. In time I outgrew thinking of my students as children. My habit of calling them children also fell by the wayside. I came to regard the Indian habit of calling adult students children as nothing more than annoying. That was until the December incidents at Jawaharlal Nehru University, Jamia Milia Islamia, and consequent nation-wide protests exposed the dangers of this practice.

Opinion: When Did Our Students Become Criminals?

Saikat Majumdar outlines one of the consequences of thinking of students as children. In his Outlook column, Majumdar links the infantilisation of graduate and post-graduate students to the public’s support for the government’s use of violence against students. After all, when a child is disobedient, what else can a parent do but discipline it! A child may not understand, but it is for their own good. So, when the students, the nation’s eternal children, turn disobedient and abandon classrooms for protests, the parent, the government, has to discipline them. I want to suggest that infantilisation of adult students allows us to ignore their status as citizens. As citizens they are political creatures. They are entitled to all the rights and protections attached to citizenship. They have a right to vote, they have a voice in the government. Like all other citizens, they have the right to hold the government accountable, protest against the violation of their rights, or the rights of others.

Adult students can be seen as children if we see education as a stepping stone to jobs, the real marker of adulthood in India. Employment as an indicator of adulthood is, of course, absurd in a country where child labour continues to thrive. Such a myopic view of education forgets that institutions of higher education are involved in the very adult endeavor of producing knowledge. Production of knowledge involves more than regurgitation of information in exams. It requires critical thinking, ability to synthesize complex ideas, and imagine possibilities and connections where none exist. It requires education beyond the undergraduate degree. The industries apply this knowledge produced in universities to come up with their latest product, whether it is the latest smart phone, or a quick way to learn new language.

Education as a phase one must complete in order to enter adulthood assumes universities and colleges are ivory towers, protected from the rest of the world. But institutions of higher education are hardly protected from the world. They are as vulnerable to economics, politics as any other institution in society. In Illinois, the state where I teach at a small liberal arts college, the recession of 2008, has resulted in a decline in the birth rate in the state. This combined with high taxes in the state has served as a deterrent to bringing in younger population into the state, despite availability of jobs. The consequent fall in college-going student population has affected public universities, and small colleges like mine, which are mainly dependent on student fees. It has led to the closure of some small liberal arts colleges, reduction in funding for humanities and sciences. The result is a transformation of the higher education scenario in the state, with long-term repercussions for society.

If university students are affected by the real world, their participation in it as political beings is hardly unusual or unexpected. It would be disturbing if they were to remain silent, docile and accept things that affect them negatively. To call them children is to shirk understanding their position. The dismissal of their perspective is especially cruel because students are protesting against policies and regulations which will affect their lives much longer than it will affect the elderly politicians who made them, or the middle-aged general public that is quick to label them anti-national. If raising fees changes the educational landscape of India, making it inaccessible and exclusive, present students and future generations will suffer the consequences. Their protests, therefore, are rational actions of adults, not tantrums of boisterous children.

Student protesters in various universities in India challenge the idea of students as children. As children they are supposed to lack political knowledge, and will. They are supposed to be powerless, under the control of parental figures. Parental figures here should read as either the state or citizens who have graduated, decided not to pursue research, and joined the labour force. If one imagines adult students as children, one can ignore them as citizens. If they act do not act as docile children, one can ignore their rights as citizens and unleash force on them, or turn a blind eye to threats of violence against them.

Come to think of it in neoliberal order of contemporary India, there is no space for students as citizens. The only acceptable way to exist, without bringing down the wrath of the government or the public, is to be the economic man, an apathetic cog in the wheels of the neoliberal machinery. As adult students of public universities protesting fee hikes, or in pursuing production of knowledge does not fit into this neoliberalism paradigm. Malaysian anthropologist Aihwa Ong points out that in the neoliberal regime those “deemed too complacent or lacking in neoliberal potential may be treated as less-worthy subjects. Certain rights and benefits are distributed to the bearers of marketable talents and denied to those who are judged to lack such capacity or potential.” If employment is the marker of success, then college, and university students are lacking in this capacity. Calling adult students children, whether in support or criticism, achieves the same thing: denial of their status as citizens.

I returned home after 7 years. The last time I was here was in 2012, before BJP was in power. I returned to find a few much-loved friends, neighbours, and relatives unrecognizeable in their uncritical commitment to the divisive hate-filled ideology of the times, in their acceptance of the government’s authoritarian tendencies. If one was to go by some of these people, democracy is on life support in India. In contrast, if one considers the student activists, their fearless commitment to social justice, and their empathy present possibilities of a future radical in its pursuit of justice and equality. Whether we agree with the protesting students or not, let us not insult them by calling them children. Right now, they are behaving with more sense, responsibility, and compassion than many adults.