Interfaith Harmony, Tolerance And The Virus

Among other things, an inclusive and accessible interfaith ecosystem could help us check the pandemic’s surge. 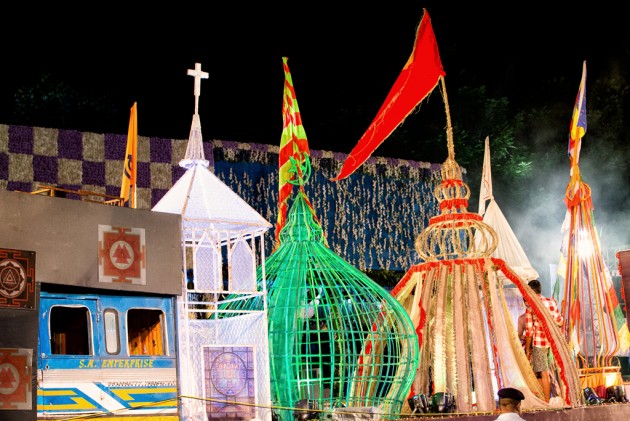 On November 21, a Mumbai-based organization of Sufi Muslims that promotes Islamic beliefs through publications and research, sent a petition to the governor of Maharashtra requesting Muslims be allowed to offer Jumuah prayers at the Raj Bhavan mosque.

The president of the Raza Academy, Maulana Saeed Noori, wrote, “Even though the entire country has opened up its religious places, Raj Bhavan employees refused to allow Muslims to offer Jumuah namaz inside the mosque, with just five to seven people praying inside.”

Though the academy’s past record of intolerance had them condemning programmes of Taslima Nasrin; calling The Muslim Women (Protection of Rights on Marriage) Act of 2019 an infringement on the religious rights of Muslims in India, and issuing a fatwa against AR Rahman and Iranian filmmaker Majid Majidi for making a film on Muhammad, their questioning of the governor’s order raises the larger and legitimate questions of democracy and toleration.

Not too long ago, the Tablighi Jamaat congregation in Delhi led to a spate of attacks against Muslims, and labelling of them as “carriers” of the virus.  A mere congregation led to a whole community’s demonization, followed by them being beaten up, spat on, and even driven out of neighbourhoods.

Reports of attacks against pastors, Dalit priests and other minority faith leaders since the nationwide lockdown in March have silently made their way into the media space without much of an uproar.

In that context, the Raza Academy’s open disapproval is a show of strength. Around June, Noori had written a letter to the Maharashtra chief minister requesting relaxation of rules for namaz and sacrificial rituals during Eid. This was when hundreds of devotees had gathered in Puri for the Rath Yatra after the Odisha government said it would “correctly balance” religion, public order, morality and health.

Are minorities incapable of achieving this “correct balance?”

While the country has taken measures in response to the pandemic that limits the freedom to manifest, either individually or in community with others, they should do so only to the extent that these restrictions are established by law and necessary for public health.  It should not go beyond what’s necessary, wherein freedom of expression becomes discriminatory in nature.

Amid crackdowns on leaders of minority faiths and inconsistent rules concerning the reopening of places of worship, it’s important to understand why this is not merely about silencing sections of the population or spiking dangerous rhetoric that demonizes the religious “other.” The question is: What are we missing out on as a people in this environment of scepticism?

Involving faith actors by giving them a role in supporting measures that could curb the virus may improve the levels of trust in the political leadership and public officials.

The pandemic has demonstrated how working across faith groups could harness toleration and empathy. Faith communities have emerged as primary sources of comfort as they provide direct healthcare and social service to the communities they serve and advocate for the needs of vulnerable groups.

In the Dharavi slums of Mumbai, for instance, faith leaders have played a critical role in arresting the pandemic, which could very well have transformed the urban sprawl into a major hotspot. Over 150 maulvis of Dharavi have worked with local doctors and community leaders to amplify mask-wearing and public hygiene messaging. In doing so, they’ve brought COVID-19 deaths down to less than 350.

Several interfaith humanitarian networks are at the forefront of nurturing interreligious solidarities to help people adapt to isolation and uncertainties. They have also been inspiring faith-based grassroots communities to create an inclusive and accessible ecosystem.

If these sporadic efforts have mushroomed across the country, imagine what it might be like if states are accountable for the obligations and commitments they’ve made to respect human rights and freedom of belief? The crackdowns on congregations and minority worship practices demonstrate how they’ve upended those commitments, and by extension, a means to curb the virus’s surge.

As Hardiwar gears up for the Kumbh Mela early next year, the Uttarakhand chief minister has said devotees will be allowed to bathe in the Ganges so long as they undergo a COVID-19 test. Even as the pandemic rages on, lakhs of believers will soak in the “divine form” after seeking the blessings of saffron-clothed godmen at numerous akharas scattered across the mela grounds.

Will this build more tolerance and harmony as minority faith groups are downplayed, and where organisations such as the Raza Academy are busy signing off petitions so they can have a small share of the faith pie and not be labelled for manifesting their beliefs?

(Priyadarshini Sen is an Independent Journalist based in Delhi. She writes for  India and US-based media. Views expressed are her own and don’t necessarily reflect that of Outlook magazine.)