INX Media Chargesheet Does More Damage To CBI Than Chidambaram

The chargesheet against Chidambaram in INX Media case is akin to producing a dead rat. It trivialises the case and raises questions about the credibility of the accusations. 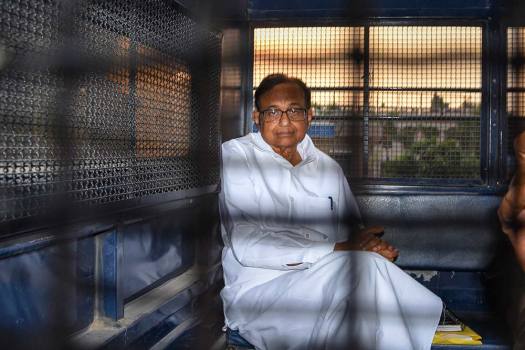 Arrested two months ago, on August 21, and in judicial custody since September 5, former Union Finance Minister P Chidambaram is really being given “the treatment”. The Central Bureau of Investigation (CBI) and the Enforcement Directorate (ED) have been going at him with an unrelenting ferocity better suited to dealing with hardened, especially homicidal, criminals.

In a country where economic offenders have often got away lightly, pampered by political patronage, the treatment meted out to Chidambaram is, indeed, extreme -- more so when it is measured against his alleged offence.

On October 18, after two months of grilling Chidambaram, the CBI filed a chargesheet on the alleged corruption in the INX Media case. It accused Chidambaram and his son Karti of having received Rs 9.96 lakh as bribes in 2008, to facilitate illegal foreign investment in INX Media, a company founded by Peter and Indrani Mukerjea.

Were it not for the cruel circumstances in which Chidambaram finds himself, he may well be given to fits of laughter over the bribe amount cited. As a former diplomat K C Singh tweeted: “that’s less than what a revenue official charges in Punjab to get property registered. Rate theek nahin hei!” The twitterati exploded with sardonic humour. One user told to Chidambaram: “you r bhai so innocent” because, by his reckoning, he charged a pittance of Rs 10 lakh for approving Rs 300 crore FDI. Not even one per cent. A retired secretary to GoI said that in terms of ease of doing business, Rs 10 lakh for FDI of Rs 300 crore or so in 2007 calls for a reward, not punishment.

However, this is no laughing matter. Nor can this be the government’s idea of a joke even though the CBI chargesheet, filed just before the mandatory 60-day deadline from the date of arrest and running to over 2,000 pages, requires suspension of disbelief.  Even his worst critics would have expected the chargesheet to be made of sterner stuff.

A politico said it was astonishing that Chidambaram -- from an illustrious family which founded banks, an insurance company and a university among other enterprises and institutions, and whose own net worth may exceed Rs. 100 crore -- has been in custody for two months because a woman accused of murdering her own daughter claims to have paid him bribe of Rs. 9.96 lakh.

Along with Chidambaram and Karti, 12 others, including Peter Mukerjea and former officials, are named in the chargesheet. It says that Chidambaram as Finance Minister “demanded illegal gratification…payoffs for himself” and guarantees for “the business interest of his son” in exchange for Foreign Investment Promotion Board (FIBP) approval of INX Media’s FDI proposals. The chargesheet refers to a meeting in his North Block office in March 2007 where journalist Vir Sanghi was present when “payoffs” were sought.

According to the CBI, Chidambaram demanded the bribe from Indrani Mukerjea. Unlike her now-divorced husband, Peter, Indrani does not figure in the chargesheet. She is the approver in the case.

The issue is not about Rs 10 lakh being a lowly sum. Far from it, the chargesheet comes as an anti-climax to the barrage of accusations against Chidambaram. After the CBI and ED had stepped up the heat in August, and got custody of Chidambaram, the expectation was that the chargesheet would be packed with explosive material detailing several offences running to hundreds if not thousands of crores involving multiple deals across countries.

Instead, the chargesheet is akin to producing a dead rat. It trivialises the case and raises questions about the credibility of the accusations. In public perception, such a chargesheet does more damage to the CBI than the accused. However, now there would be greater interest in seeing how the judiciary deals with this. Meanwhile, the debate continues on whether a bribe of less than Rs 10 lakh should be described as peanuts or chickenfeed.