Yogi Adityanath’s ruthlessness may be replete with messages not only for the protesters, the minorities and BJP MLAs in the state but also for the “Delhi Duo”. 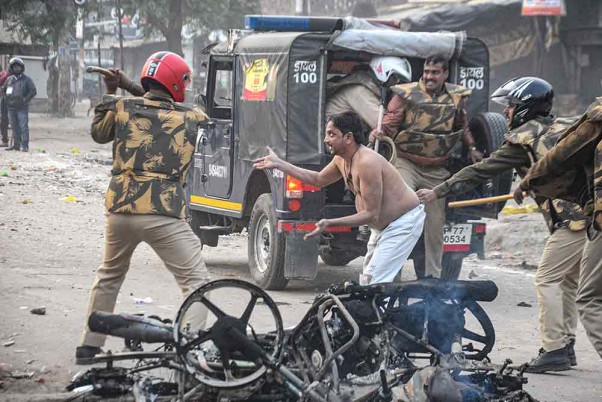 The Uttar Pradesh government’s brutal crackdown on those protesting the Citizenship Amendment Act (CAA) went far beyond the worst such actions seen in a country, where the police are known to unleash violence against peaceful protesters without any provocation whatsoever. The attack on the protesters was communalist, savage and vengeful with the ruling political class and civil administration throwing their weight behind the police action. In fact, when the protests broke out, BJP’s UP Chief Minister Yogi Adityanath had vowed to take “badla” (revenge) and is doing so ruthlessly.

Can the holder of a constitutional office use -- for personal, party and partisan reasons -- state power and force to take revenge against those exercising their constitutional right to protest? Such questions would seem academic and arcane in a state that has often slipped into jungle raj. But, UP’s current descent into lawlessness is without precedent. There is unabashed contempt for the law (and the Constitution) in the name of keeping order.

Never before has popular protest across a whole state been crushed with such unbridled violence as in UP. Out of the 24 who died in anti-CAA protests across the country, Yogi’s UP accounts for 19 killings, including in police firings, which the authorities had initially denied. In addition, the UP police have arrested over 1100 in 327 cases registered in the two weeks since December 11.  At least 5500 are under preventive detention. This is more than the 5161 preventive arrests in the Kashmir Valley from August 5, when Article 370 was scrapped, to mid-November.

Age, status, privilege and political positions mean little in UP’s present state-led goonda raj, except that to be Muslim could mean a worse fate. Some UP cities saw minors, including school students, shot at, hurt, arrested and detained. In others, the elderly, women and businessmen faced the wrath of the police. There are those who escaped arrest or detention, only to be beaten and terrorised in their homes, shops and business premises, which were vandalised. Muslims were reportedly particular targets of such violence. Even the old and the sick were not spared.

Congress party general secretary Priyanka Gandhi Vadra claimed she was roughed up and stopped on her way to meet the family of a retired 75-year-old retired IPS officer, S R Darapuri, who is known for his public services. He is among scores of people – such as social activist Sadaf Jafar, theatre artist Deepak Kabir and 76-year-old lawyer Mohammad Shoeb – who have been arrested. The police are out to extract the revenge that Adityanath promised, for example, by collecting cash for damages and other lawless acts to beat protesters into submission.

In short, Adityanath is terrorising a whole state to submit unprotestingly to his authority. Why? Is he running scared? Or, has Prime Minister Narendra Modi’s remark -- that those protesting and indulging in violence can be identified by their clothes -- put pressure on him to prove that he can crush the protests?

Adityanath cannot forget that he was not Modi’s first choice to head the state. UP is all-important to Hindutva forces. Here the BJP expects to reach its pinnacle by building a “sky-high” Ram temple, made possible by the Supreme Court’s verdict.

By appearing as a strong, uncompromising leader of Hindutva forces, Adityanath can aspire to outshine Modi and Home Minister Amit Shah, who may not let him rise any higher in the BJP.

In the circumstances, the unspeakable atrocities of Adityanath’s communalised police force – wherein a senior officer asks protesters to go to Pakistan – may be to assert his primacy over BJP MLAs and factions opposed to him. His efforts may well be to strengthen his position for stealing the thunder of building the Ram temple in Ayodhya.  It is in the crucible of such conflicts, which polarize people, that BJP’s “strong” leaders are created.

Thus, Adityanath’s ruthlessness may be replete with messages not only for the protesters, the minorities and BJP MLAs in the state but also for the “Delhi Duo”.