A quick history of each of these people makes you wonder at the sanitisation of evil, of how quickly violence and war can be forgotten, writes sociologist Shiv Visvanathan. 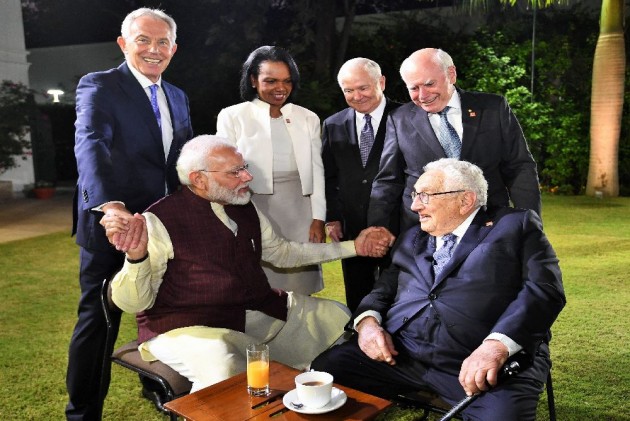 Philosophers of ethics, long passive before the new inventiveness of violence, are now asking for new concepts, new articulations to create a different understanding of war and violence. One of the ideas proposed is the notion of a genocidal count. Numbers have been used by economists to create a halo around production and productivity figures. Philosophers, too, must use the metaphor of numbers -- the idea of numeracy -- to map out the violence inflicted by top politicians.

One needs such indices when one confronts pictures of a recent meeting (October 22) hosted by the JP Morgan International Council in Delhi. The Investment Centre had assembled what it thought was an assemblage of sages, with five of the six beaming like retired politicians, oozing an affable sense of life.

These included Henry Kissinger at 96, Tony Blair, the former British P.M, Condoleezza Rice, George Bush’s national security advisor, John Howard the Australian P.M and Robert Gates, ex-Director of the CIA. Framing the picture and literally connecting them is our own P.M Narendra Modi, holding hands with Blair and Howard and gushing at Henry Kissinger. It is an unbelievable assemblage of people who once held power but now are harmlessly attending conferences.

A quick history of each of these people makes you wonder at the sanitisation of evil, of how quickly violence and war can be forgotten. Henry Kissinger, often seen as the modern sage of death, responsible for the bombing of Cambodia and Pakistan’s mentor during the genocide of Bangladesh, stands foremost as the Bhisma of fatalities. He has an almost mystical status among death dealers with a Nobel Prize for peace to boot.

Smiling benignly is Tony Blair and John Howard, suppliers of men for the war-time antics of Bush. Not to be left out is Condoleezza Rice, National Security Advisor to Bush. The genocidal count of these men must be in several million, yet they stand as wise mentors of an international conference. It is literally a 21st Century dance macabre turned inside out. A dance macabre was a dance of death during the great plagues of the medieval era.

This picture is a dance macabre around the latest plague – war. Modi looks like a happy boy scout in the middle of chieftains. There has always been a question mark over his history in the Gujarat carnage. Yet, if the internment camps come up as India’s own version of the Gulag, Modi would be a truly aspirational person that he regularly claims to be.
The photograph looks objective and linear as a picture. But it is a caricature of the loss of memory -- the amnesia of media -- as they confront new events without unravelling their meaning. One would feel one is looking at a panel of experts endlessly ranking the competence or incompetence of countries, a Valhalla of great politicians. Yet this picture is seedier than any collection of gangsters or Mafiosi, or Nazi politicians. The politicians look as if they are attending a parent-teacher meeting or a University reunion.

A decade ago, Hannah Arendt wrote about Eichmann in Jerusalem. She faced a similar problem. Confronting her was Adolf Eichmann, a towering 5 feet six inches, innocuous as a bell boy. Arendt, in fact, quotes a psychologist who claims that Eichmann was more normal than he was, after interviewing him. Arendt felt Eichmann felt no guilt, claiming that he was merely following orders. Arendt called it the banality of evil.

These politicians could equally claim that as patriots they were following the logic of the nation-state. The question now is that when evil is both endemic and banal, how does one confront it? How does one write the secret history of death behind this picture of faded authoritarians?

Are we, as Indians, going to claim that we are like them? That India, like China and the US, is part of the G-7 of genocides. Sometimes media inadvertently plays a pedagogic and moral role. I remember a Chinese sage who once said: “One picture is worth a 1,000 words”. This photograph is worth much more, provided one can read the immoral and amoral depths that its apparent amiability conceals.

(The writer, a sociologist, is a member of Compost Heap. Views are personal)