Amphan Diary: How A Jurassic Storm Uprooted Bengal's Trees And Lives In One Evening

Right now our lives are uprooted – internet connectivity and mobile data are gone, milk is coming in a slow trickle – and what happened in the Sunderbans one can only guess. 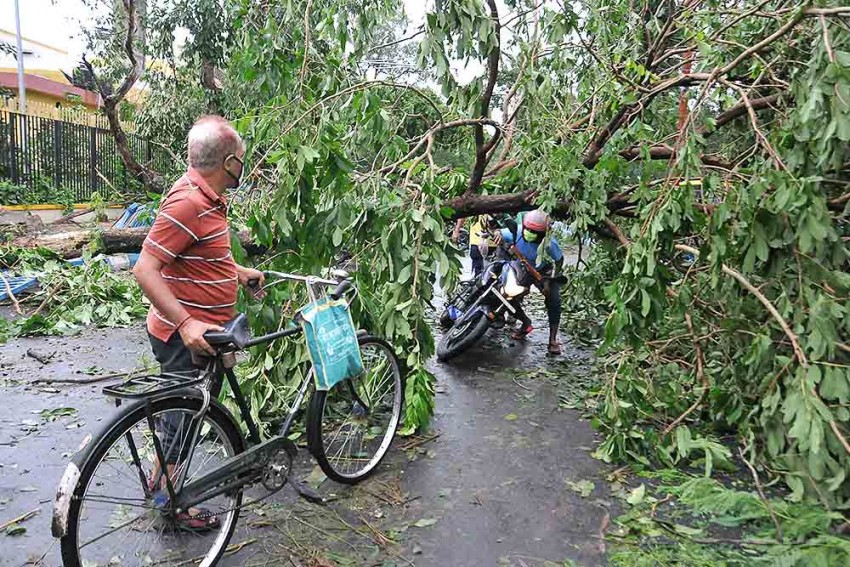 Commuters try to pass under an uprooted tree on a road, in the aftermath of super cyclone 'Amphan', in Kolkata.
PTI Photo
Anjana Basu 2020-05-23T11:14:32+05:30 Amphan Diary: How A Jurassic Storm Uprooted Bengal's Trees And Lives In One Evening 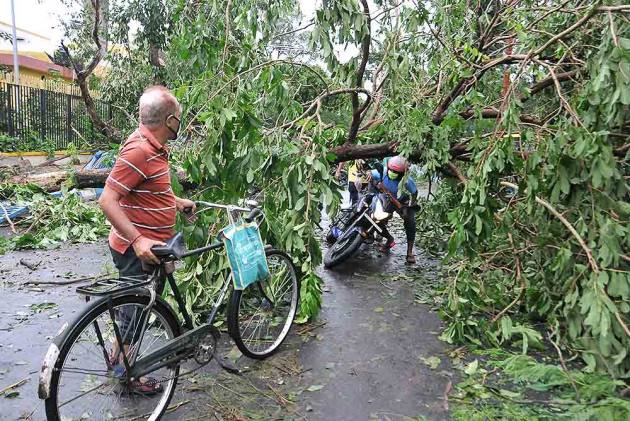 We had all seen storms, we thought. Cyclone Aila blustered through the city for three days uprooting trees and destroying mangroves in the Sunderbans and almost lifted me off my feet when I made the mistake of trying to cross the office courtyard. Cyclone Fani had me walking from office to catch visiting hours in Park Clinic where my mother was admitted. Now Amphan? That sounded sort of like ampanna and in any case, the speculation was that the cyclone would do a detour to Bangladesh. How bad could it be? However, the papers were filled with warnings for high rise buildings and “Stay Home Stay Safe” messages.

On Wednesday morning, Amphan was fretting grey skies and I managed a trip for medicines before the shop shut at noon. I saw some dangling lights on a lamppost and wondered in what shape they would be after Amphan but it was a passing thought. Yes, some more trees would get uprooted, some lampposts would topple...normal stuff. This was a city after all, not the Sunderbans. By four o’ clock the skies were beginning to darken; I had the computer on and was trying to finish some work from home before I turned off the broadband – my main worry since the Airtel junction box crossed Rashbehari Avenue and was exposed to all kinds of wind and weather.

All the windows had been shut – though the house was old. We roped some of the ones where the bolts had been painted over and thought: all right, we are good to go, let Amphan do its worst. The road below was deserted barring the tail lights of a few cars that looked distorted in the veranda glass while passing by. 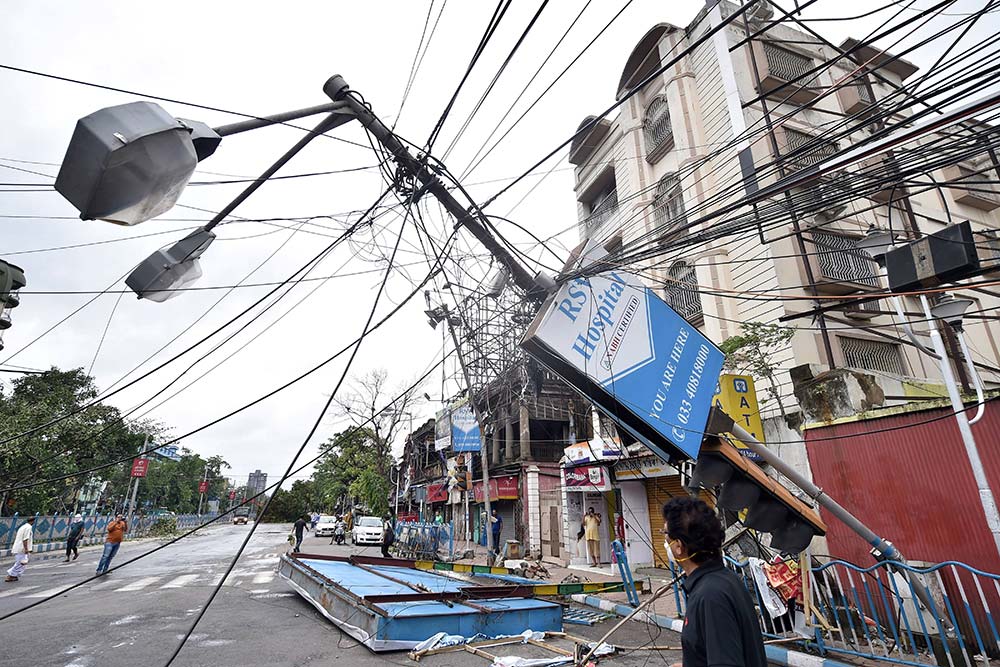 The rain started lashing at five and the power began to flicker on and off. There wasn’t much wind but the power lines were a worry. Without power and no emergency lights, cooking and the other necessities would be a problem. A friend on the phone, the last call I made before the strike, cried, “This is climate change! We’re doing this!”

Jurassic Park hit us around six. It tore around the house trying to get in through the nooks and crannies, shaking and rattling with low growls of thunder. Glass shattered from a window that had torn free of its moorings. The old veranda windows held and I sat in darkness and watched the old banyan tree outside clawing against the panes. There was a shout from the cook that we would need more rope so there was frantic window tying.

There was a stream of water in my bedroom coming from under the new sliding windows. Sliding and skidding I discarded four sopping mops and a few torn trousers trying to stem the water. 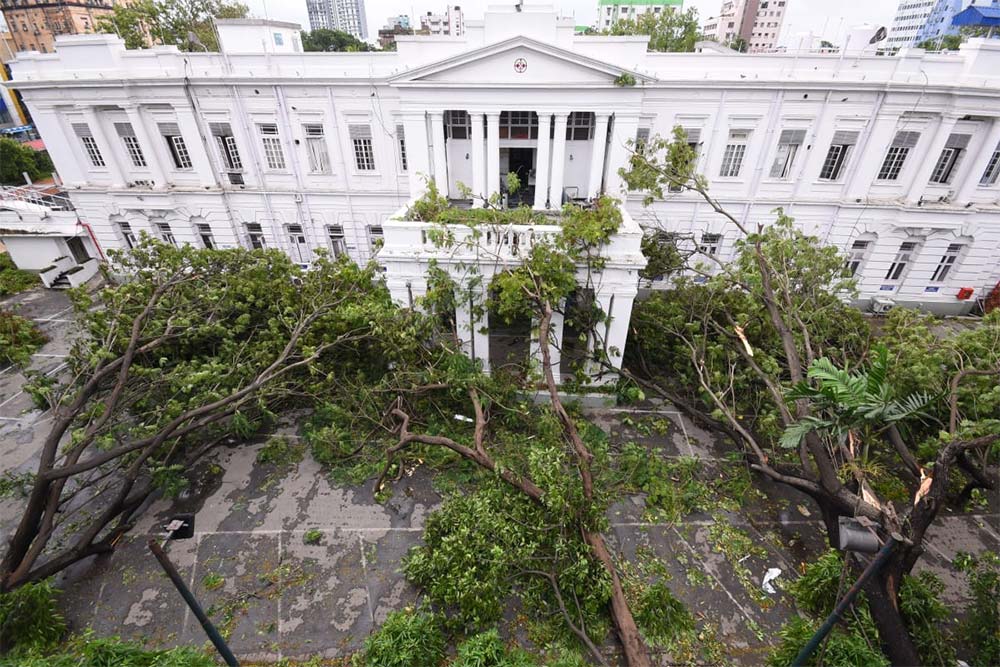 A tree blocks a road after being uprooted due to heavy winds and rain ahead of cyclone 'Amphan' landfall, Calcutta Club in Kolkata. Photo: Sandipan Chatterjee/Outlook

But if it was stopped somewhere, it leaked somewhere else. The front door downstairs was shaken open from its electrical contacts in a rush of fury and the floodwater in our lane gushed in. “Bolt it!” I yelled to the cook. He was trying to push out the leaves that had come in and finally managed to shut the door in the teeth of the wind. And the tyrannosaurus of a storm continued rattling and raving, pushing for entry.

At seven the lights were back and steady, something at least. I ignored the rattling windows and the trees surging like sea and continued mopping water. Upstairs one of the lights was sparking. “Right,” I thought, “all we need is a fire.” The switches were turned off but the sparks flickered. 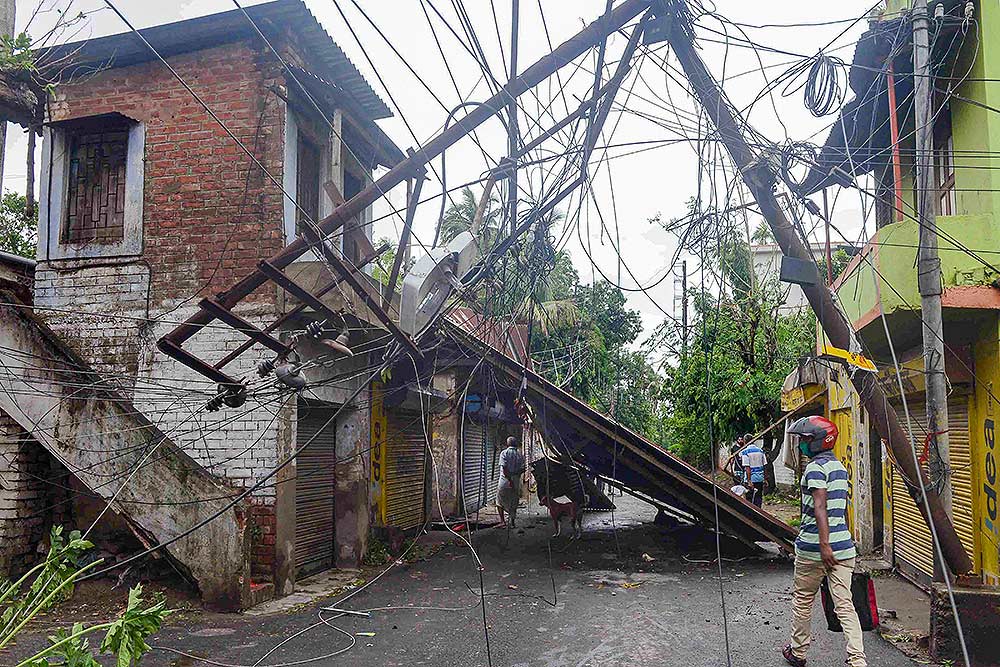 A man walks past a damaged electric post in the aftermath of Cyclone Amphan, at Sonarpur in South 24 Parganas district. Photo: PTI

By 7:45 pm there was a sudden hush. Where had it gone? Was this the eye of the storm? In which case it would be back again and I had no idea whether the doors and windows would survive. How I wondered wildly were people managing social distancing in the middle of all this? Then I started fretting about the windows again.

Amphan did not return. It uprooted 5,000 trees, the old Banyans and Gul Mohurs and turned the historic banyan in the Botanical Garden almost topsy turvy. The trees in turn crushed cars, the traffic signal across the road fell, green light still on, glowing eerily under the leaves--one of 400 I hear--and lightning did the rest. 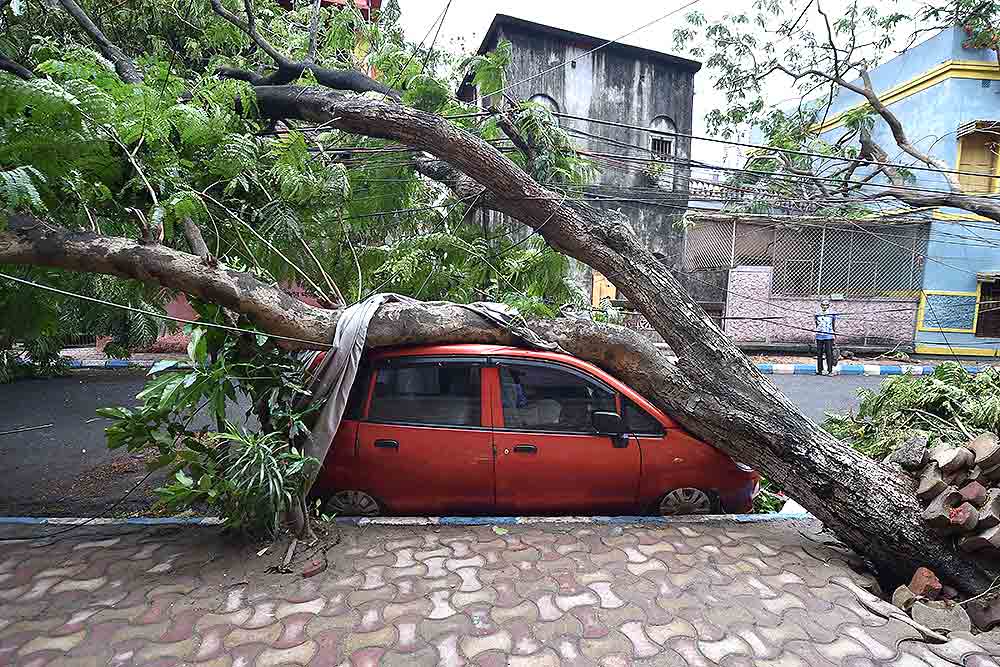 A car parked along a road damaged by an uprooted tree, after super cyclone 'Amphan', in Kolkata. Photo: PTI

Right now our lives are uprooted – internet connectivity and mobile data are gone, milk is coming in a slow trickle – and what happened in the Sunderbans one can only guess. Gariahat Market has had its sheltering plastics ripped off. From the road outside I can hear the steady hack of axes on tree branches. People are trying to get their lives together, open shops, do something. A voice cuts through in high pitched horror, “I saw so many bodies you wouldn’t believe it..."

(Anjana Basu is a Kolkata-based author and columnist. Views expressed are personal.)