Labour Reforms Necessary, But Hold No Meaning If They Take Away Labourers' Rights

The COVID-19 crisis has not only worsened the already pathetic conditions of workers, but has also impacted revenue and cash flows for existing businesses, adversely affecting investment decisions. 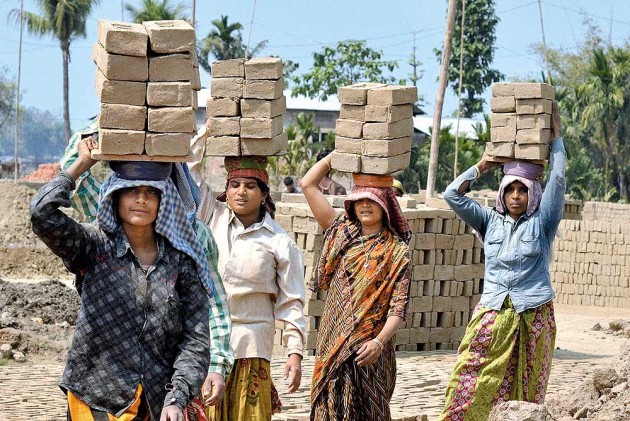 A lot of us have only recently witnessed the glaring vulnerability of migrant workers, fuelled by the nationwide lockdown. At the heart of this vulnerability is a will to eat again. The plight of workers, especially migrants, has undoubtedly shaken the conscience of the country, but the problem runs deeper than the pandemic. In the pre-COVID era, workers were already prone to exploitation, marked by long working hours, non-payment of wages, low wages, unhealthy working conditions and minimal access to benefits.

The COVID-19 crisis has not only worsened the already pathetic conditions of workers, but has also impacted revenue and cash flows for existing businesses, adversely affecting investment decisions. While the central government’s fiscal stimulus package is aimed at reviving the economy, some states are trying to rejuvenate the economy by pushing through long overdue ‘labour reforms’ to attract investments in industry.

Labour regulations serve three crucial purposes. They protect the rights of workers, provide an enabling environment for businesses, and collect data and record maintenance. Historically, regulations have been underscored by weak enforcement, excessive rigidity, and the administrative burden they place on businesses. Incremental and piecemeal regulations have suppressed businesses, compelling them to ‘stay small’ due to their restrictive nature and compliance burden. The numbers are mind-boggling - there are approximately 40 central level statues, and over 100 state level laws, but they only regulate less than 15% of India’s workforce, which is employed in the formal sector.

Labour regulations have also been criticised for hampering the interests of both employers and employees. For example, from the perspective of employers, thanks to the Industrial Disputes Act, 1947, it is very cumbersome to ‘hire and fire’ workers without government permission. Historically, businesses have had to maintain multiple registers and file separate returns under the 40 plus central labour acts. From the perspective of the employees, regulations have been criticised for inadequate social security nets, low wages, and weak enforcement overall.

The plethora of regulations that are currently in force can be divided into four main categories, and the government is currently codifying laws into these categories. The first of these proposed new codes will regulate wages; the second will define industrial relations; the third will look into occupational safety, health, and working conditions; and the fourth, most importantly, will regulate social security.

Uttar Pradesh recently passed an ordinance that exempts all establishments, factories and businesses from the purview of all, but three labour laws and one section of a fourth act. This will be for a period of three years.

While the stated objective is aimed at stimulating economic activity, the proposed solution has missed the mark. It seems likely that the proposed waiver of labour laws will further weaken the rights and welfare of workers, while also falling short of the primary objective of incentivising economic activity and new investments. Rather than a reform, the move is much closer to deregulation of labour.

Companies that are looking to invest in a new destination analyse various factors, including political stability, rule of law, physical and industrial infrastructure, transportation and logistics, access to markets, and a streamlined business regulatory environment. Labour laws are only one part of a business regulatory environment that also includes environmental permits, land permits, construction permits, taxation laws, etc. So, it is fallacious to assume that suspending labour laws will increase investment. In fact, evidence suggests that labour reforms that are aimed at strengthening labour protection can have a positive impact on worker productivity and employment growth - but not investment. Deregulation of labour essentially weakens worker protection, rather than strengthening it.

The other crucial aspect is whether a three-year concession can legitimately attract long term capital. If an investor decides to set up industry in Uttar Pradesh, it is likely that the timeline from the decision to commissioning will be anywhere from 12 to 18 months. In case the intention after three years is to revert to the old set of laws, that will act as a deterrent to a long-term investor.

The proposed suspension of all labour laws will further weaken workers’ protection - including wages, social protection and working conditions - and also hamper their ability to seek redressal. In effect, the ordinance will have an impact on all four categories of labour regulatory areas that have been mentioned above.

The complete suspension of labour laws means that employers no longer have to follow basic safety norms in factories, pay minimum wages, compensate workers for industrial accidents, or pay overtime to workers. In addition, the protection that law provides to women workers will also be suspended, including sexual harassment rules, and other facilities provided to women employees, like night shifts, transportation facilities etc. In case a worker wants to contest any of these changes, they will also lose their right to organise and bargain collectively.

It is important to understand that while there is weak enforcement of current laws, they are also the only option that is available to workers to claim what they are rightfully owed under law, and to seek redressal in case they are unable to claim their rights. The suspension of labour laws will mean that workers will lose this structure of support, and will be at complete mercy of employers. This is likely to leave them vulnerable to exploitation, and reduce their productivity and overall welfare.

An Alternative Approach to Reform

Given the current uncertainty, approaching labour reform with a lens of caution is essential. Hence, it is important to note that the regulatory costs that labour laws place on businesses come from two main sources - policy rigidity and administrative burden.

Policy rigidity stems from the position laws take in the inherent battle to strike a balance between the interests of businesses and the rights of workers. For example, hire and fire regulations. The administrative burden, on the other hand, stems from the various compliance requirements that businesses have to complete and that includes maintenance of labour registers, furnishing of labour returns, and on-site inspections.

A mature regulatory stance at this stage would be to take a more nuanced position on what can be simplified and what is best left untouched. This would mean channelising efforts to reduce the administrative burden in the short run, and simultaneously begin a dialogue around more substantive policy reforms in the medium to long term, in a collaborative manner with the workers’ stakeholder groups.

In the short run, this would mean addressing process constraints around registration, maintenance of registers, and inspections of businesses. Madhya Pradesh’s labour reforms, announced around the same time as UP's, have attempted to do exactly this, and this is also an area that the central government has targeted in a focused manner in the past few years.

In the reforms introduced by Madhya Pradesh, registration and licensing for industries, shops and bidi manufacturers amongst others, will now be delivered in one day against 30 days which is the current service level agreement. This change has been accompanied by changes in the Public Services Delivery Guarantee Act, which defines the service level agreements for multiple government services. On the inspections front, the state has also allowed third party inspections under certain labour laws. Initiatives taken by MP aim to reduce the frequency of inspections, ease the registration and licensing processes, and broaden the thresholds of when regulations become applicable to firms.

While administrative streamlining is relatively easier to achieve and is uncontested, policy reform require a more carefully considered and consultative approach. The central challenge for labour regulation in India has been the balancing of workers’ rights and the enabling environment that businesses require to flourish. Maintaining this balance has proven to be tough, which is why labour reform has been a sticky topic for successive governments.

The focus should be to allow a consultative process to tackle some of the long standing labour policy issues. There are areas where greater flexibility will be required going forward, and there will be other areas which will require a tighter regulatory control.

There are obvious gains to be achieved from more flexible policies around the hiring and retrenchment of workers, bringing India closer to international standards. Similarly, there is significant scope for improving industrial relations and the way workers organise for collective bargaining. On the other hand, in areas such as worker compensation, and health and safety standards, regulations and their enforcement will need to be further strengthened, rather than relaxed.

The myriad regulations and associated costs of compliance means that firms have a strong incentive to stay small and informal. Unleashing the true potential of the labour market will require both administrative reforms and the resolution of some of the more long-standing issues on the policy front.

In recent times, we have witnessed an increased interest from governments, businesses, and trade unions to meaningfully engage in substantive reforms. This momentum has been built over many years, through overcoming the trust deficit between the three parties. The ongoing pandemic has placed the focus squarely on the weak regulatory scaffolding of our labour market, and the case for reform has never been more obvious. But a knee-jerk reaction to reform may set us back by decades. The need of the hour is to build on the reform efforts of the past decade, and aim for a regulatory structure that offers greater flexibility, but also ensures that a balance is maintained between labour market flexibility and protection of labour. The four labour codes that are currently in various stages of progress, present a platform to do just that, while achieving both policy and administrative reform.

Governments regulate business activities to correct market failures, to check monopolistic practices, and to protect public health and safety. This pandemic has shown us how incredibly fragile the lives of our poorest workers are, and how in times of crisis, there is very little protection they receive from public or private institutions. They will only come back to work in our factories if they are given more rights, not less.

(Alok Rajan is a Consultant at Oxford Policy Management. Ishani Tikku studies Public Policy at the University of Chicago. Views are personal.)