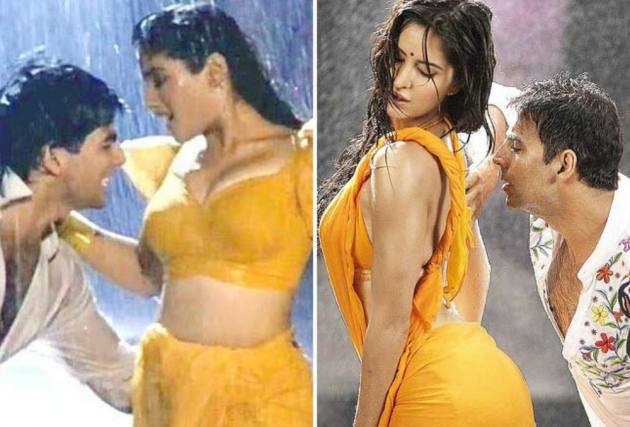 When actress Raveena Tandon and Akshay Kumar romanced in the track 'Tip Tip Barsa Pani' in 1994 blockbuster 'Mohra', everyone loved everything about that song. The rain, the saree, the chemistry between Raveena and Akshay. So, it made sense for director Rohit Shetty to revamp the song for his recent release 'Sooryavanshi'. The new song too is being enjoyed by the music lovers. This song too, has everything, the rain, the saree, Raveena, and Akshay. No, wait, the rain, the saree, Katrina Kaif, and Akshay! Same song, same look, and feel, the actor is the same but somehow the female actress is changed. I wonder why?

This is not the first time the female lead has been replaced in a revamped version with a younger actress in a song. While many would argue that the film is an Akshay Kumar film, we have seen many actors do special appearances for a film. So, why wasn't Raveena Tandon included in this special number for the film? The answer to all these question marks lies in the ancient old tradition of Indian films. The answer spells out ageism loud and clear.

Actor Saif Ali Khan grooved to his popular song 'Ole Ole 2.0' more recently in his film 'Jawaani Janeman'. While the original track from the film 'Yeh Dillagi' has actress Kajol in the narrative of the track, this new, funkier version had a very different storyline to it. One does wonder if featuring Kajol in the latest version would revive the nostalgia in the fans or not.

Why does 'Ek Do Teen', which will be a Madhuri Dixit song for eternity, have a Jacqueline Fernandez in the remake? Why does Sushmita Sen's iconic 'Dilbar' track have her replaced by Nora Fatehi? What is this obsession with replacing popular, talented, actresses with younger female artists in the revamped versions?

Then we wonder why does a Shilpa Shetty Kundra dancing in the remake of 'Chura Ke Dil Mera' for 'Hungama 2' is such a big deal.

This was just about songs, let's talk about films.

A male artist can come once in two years with a film and still his films will never be tagged as a comeback, but a female artist can jump right to film after a few months of maternity leave and everyone is quick to call it a comeback. Do I need to take names here?

Now, I don't understand why actresses, who continue to enjoy a crazy following from their 90s till now are almost never, ALMOST never considered to lead a remake in their film? Let us broaden our search.

The issue of ageism and sexism is not just in Hindi cinema. When a popular film from another language is made in Hindi, for example, Tamil film 'Minnale' starring R Madhavan's film translated into 'Rehnaa Hai Tere Dil Main', the lead actor remained the same while actress Reema was replaced by Dia Mirza in the Hindi version.

Let us now hop onto an entirely different aspect, something that people do wonder about more often than not. Why is it that a superstar in his late 50s is leading a film with a huge pay cut but his leading lady in most cases, in MOST CASES, is a young actress in her 20s? In very rare instances now, do we see actresses who have crossed their mid-30s take a large chunk of screen time in Hindi films. And let me not just confine this obsession with 'young heroine' to Bollywood. A Tamil superstar in his late 60s continues to romance an actress half his age.

A superstar from the Telugu film industry who is in 60s is wooing a 30-year-old actress. Why is the shelf life of an actress always and ALWAYS half of that of her peers?

Oh, of course they do. When they make a 'comeback'.