The levy on alcohol is an act of executive excess and deserves to be struck down for political, economic and moral reasons, among others. 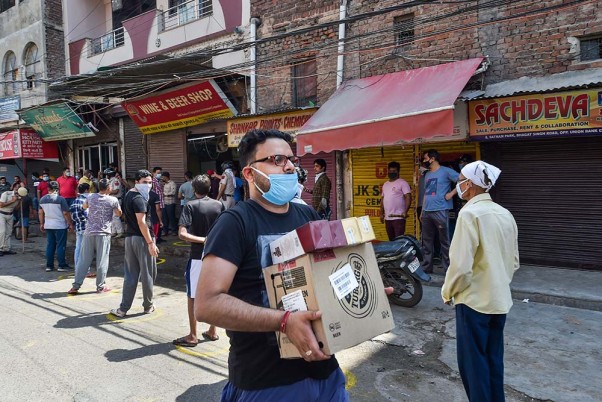 Alcohol is what alcohol does. Generally, it makes people enjoy the glass that cheers but does not inebriate. However, it can be heady for those who do not exercise restraint, like Aam Aadmi Party’s Delhi Chief Minister Arvind Kejriwal.

He has gone where no government in independent India has gone, in imposing a 70 per cent tax on the maximum retail price (MRP) on liquor. Never before has there been such a massive levy – tantamount to arbitrary extortion -- on any consumer product over and above the MRP.

The 70 per cent ‘Special Corona Fee’ came into force on May 5 – incidentally, the birth anniversary of Karl Marx – which was the first day on which certain restrictions in the third phase of the lockdown was relaxed. Close on the heels of Kejriwal’s extortionate levy, public interest litigations were filed in the Delhi High Court. The arguments are that the levy is illegal, arbitrary, exceeds what is authorised by law, a means to loot the consumers who are already hard-hit financially and imposed without any justification or explanation. The court, though, was not sufficiently moved to grant an interim stay against “Kejriwal’s loot levy”, as it has come to be called.

Whether the court upholds the levy or not, on the face of it such a levy appears patently illegal, bad in law, arbitrary and bordering on extortion enforced by state power. The levy is an act of executive excess and deserves to be struck down for political, economic and moral reasons, among others.

To take the moral aspect first. Nothing has brought forth so much cant and hypocrisy in India as prohibition; and, the policy and pricing related to alcohol. The Directive Principles of State Policy in the Constitution (Article 47) says that “the state shall endeavour to bring about prohibition”. Our duplicitous parties and governments cite this whenever convenient to justify policy gyrations and price games relating to alcohol.

Prohibition helps bootleggers, the illicit alcohol business and the coffers of political parties. It can no longer be squeezed for electoral mileage as was possible some decades ago. Regardless, there is a moral stigma to drinking among large sections, coloured by Hindu religious attitudes which add up to what may be described as “a Hindu moral police mindset”.

Such a mindset is exploited by Kejriwal, an avowed devotee of Lord Hanuman, who had advised people to read the Bhagvad Gita. He, perhaps, thought he could get away with the “loot levy” because people may not challenge or protest it for fear of opprobrium.

Economically, an unjustified 70 per cent levy on any consumer item without public debate or due procedure, is untenable. In the case of alcohol, it ignores underlying pricing principles. One of these is that the price of alcohol in any state should not be very much more or less than in neighbouring states; and, this is necessary to check smuggling of and illicit trade in alcohol. It is being put out that it is a “corona fee” and, therefore, not permanent. When it is becoming increasingly clear that we may have to live with corona, does this mean that Delhi will also have to live with this 70 per cent levy on MRP of liquor?

Any tax must be reasonable although what is reasonable is a moot point. As it is 55 to 60 per cent of the price of alcohol comprises taxes. And, willy-nilly, this has come to be accepted as reasonable. Delhi rakes in nearly Rs 6000 crore per year in excise revenue – the highest, along with Mumbai, in India.

Politically, there are two views. One, that Kejriwal has been carried away by his moral and Hindu religious righteousness to extract this money from tipplers; and that he is naive in these matters. The other view is that as a politically savvy former revenue service official, he knows exactly how this will play out and who will get the pay out. Continuous closure of liquor vends (or recourse to prohibition for acquiring a noble Hindu halo) would deprive the state of revenue and help the illicit trade. But with his 70 per cent tax on MRP, he wins both ways: the state’s takings are hugely boosted and, at the same time, the exorbitant price of liquor ensures that those thriving on illicit rackets are also not run out of business. It would be a two-way boom rooted in booze.

As they say, politics is all about pricing. The right price can strike the right balance between conflicting interests. Now, the real Kejriwal must stand up and clarify whether this is policy or strategy.