Lohri, Farmers, And The Enemy Within 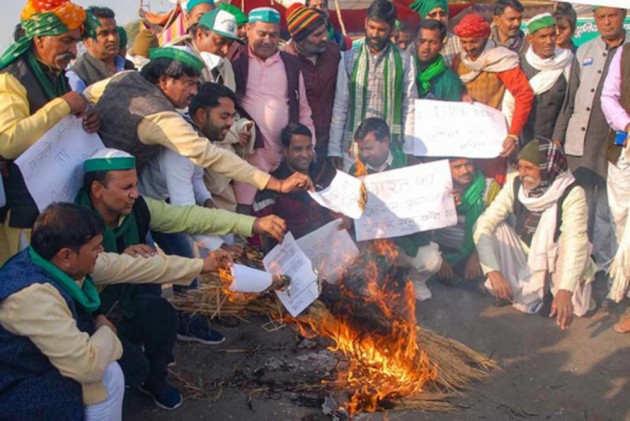 At 3.45 pm on January 13 when Lohri fires were kindled at the Tikri border outside Delhi, protesting farmers partook in a new Lohri tradition. Instead of their centuries-old rituals, they shredded copies of the farm laws. Soon, the protest site was studded with bonfires around which men and women danced, raised slogans, and mobilised their communities as the evening wore on.

In the countryside in Punjab, Haryana and Rajasthan, Lohri marks a joyous closure to weeks of laborious work on the rabi fields and the end of the winter solstice. Children go from one house to another demanding sweets and savories, just as bonfires are lit at village squares around which farming families sing traditional songs and toss treats into the fire.

This Lohri was markedly different. Large segments of the farming community have moved to the borders of Delhi to demand repeal of the agricultural laws. Through their protest they want to articulate this: The harvest season or the advent of new beginnings—is not going to be seasonal.

Farmers' Tractor Rally On Jan 26 | You Are At Liberty To Invoke All Powers Under Law: SC Tells Delhi Police

Punjab: Protesting Farmers Burn Copies Of Agri Laws On The Occasion Of Lohri

The farmers we met at Tikri were clear that their demand for repeal was in sync with their yearning for a total transformation—an ouster of the suit-boot sarkar; end of discrimination against minorities; and most vocally, the end of religious polarisation, which has escalated to unprecedented levels in recent years. The farmers were firm that change needs to be total and irreversible.

Religious harmony held out as the strongest glue binding communities in their zeal for a break from past injustices. Kartar Singh, a 75-year-old farmer from Punjab who spent over two decades serving the army, said farmers were in solidarity with those affected by the revocation of Article 370 in Kashmir and caste-based repressions, as well as the victims of riots and hate-crimes.

Singh was insistent he would spend Lohri around a ritual fire tearing to bits farm bills along with his Hindu and Muslim brethren. The laws, he harped, have sparked the thirst for freedom just as the thirst to overthrow the yoke of colonial rule. “This is a historic moment in our country’s fight for democracy, the only difference being the enemy is within and not outside,” he said.

Singh’s sons who helped him survive severe bouts of illness camping out in Delhi’s harsh winter, said the Jat shopkeepers around their habitation had gone “over and beyond” for their family—from helping them wash their clothes to making them feel “included” in the city. Singh’s family, in turn, invited them to their langars and tea breaks. After Lohri, they want to bring their women to the protest site to join in the demand for recovery and healing from a multi-faced pandemic.

Thousands of women marched declaring the protests as not merely an agrarian-political movement but a long-term call to conscience. “This is a spiritual battleground for us,” said Savitri Singh, a local leader from Haryana. “If religion has been used to turn people against each other and marginalize minorities, we are using our spiritual centres to foster unity and tolerance.”

Unlike the more popular Singhu border where interfaith harmony was abundantly clear through the presence of Muslim farmers from Malerkotla serving langar, Khalsa warrior Sikhs in their electric blue attire mobilizing communities, or even small gestures of inclusion by fringe religious outfits, in Tikri the Lohri festival’s message was more understated.

Farming women—seen as the bearers of spiritual wisdom—were egging tractors and trolleys packed with farmers to mobilize people of all faiths across the 18-km stretch in their common fight against injustices.

“We will not rest till our movement spreads like cancer across the country,” said Harsimran Sanjha from a farming community near Ludhiana. “If they say Khalistanis have infiltrated our protest sites, they must know we all uphold Gandhi’s ideals of ahimsa and satya.”

The local paper, The Trolleytimes, produced out of a tractor by farmers themselves, was being widely circulated urging all communities to show the strength of their unity. Some farmers we spoke to, said, their tractors and the habitations around them were symbols of solidarity, and their local paper’s cultural output would maximize during religious festivals such as Lohri.
If Lohri set the tone for religious harmony against hate and misinformation, the upcoming tractor march on January 26 from the borders into the streets of Delhi is geared towards furthering that.

(Priyadarshini Sen is an independent journalist based in Delhi. She writes for India and US-based media. Views expressed are personal and do not necessarily reflect those of Outlook Magazine.)